Chief aim of these crops is to produce enough indigenous seeds for the organic farmers across the country.

Samuel Nderitu, executive director of G-BIACK (pictured) says he was motivated to start production of indigenous seeds after realising farmers were struggling to access seeds during planting season.

Nderitu, a crop researcher, has initially worked in Kitale with an NGO for over 13 years. Prior to starting the gene bank in 2021, they visited India together with other crop researchers to benchmark how locals used and benefited from keeping and managing own seeds.

“We learned that farmers owned gene banks and how their own indigenous seeds were able to regenerate. They were buying commercial seeds at costly prices from seed vendors,” he recalls.

On returning, Nderitu was challenged to start a gene bank. He wanted to persuade farmers to minimise and later abandon use of pesticides and chemical fertilisers that were harmful to environment.

“However, to create a bank I needed to source indigenous seeds, the open pollinated varieties from people who had been storing them.”

Luckily, he got sorghum heirloom seeds called Rasta from a farmer in Bungoma who had been planting and saving them for over 50 years.

“I brought the sorghum seed here and started multiplying them. l now have lots of it that l supply to farmers. This sorghum variety is rarely attacked even by birds.”

Today, Nderitu has indigenous seeds of almost every crop in his gene bank. “It has not been easy. It took me a lot of time to move around the country to get them,” he reveals.

He says they multiply and he gives them to farmers, who after planting and harvesting, pay back twice the amount they receive. The gene bank is a building made of locally available material such as cow dung, old bottles and tyres, that also conserve the environment. The use of mud makes it cool. 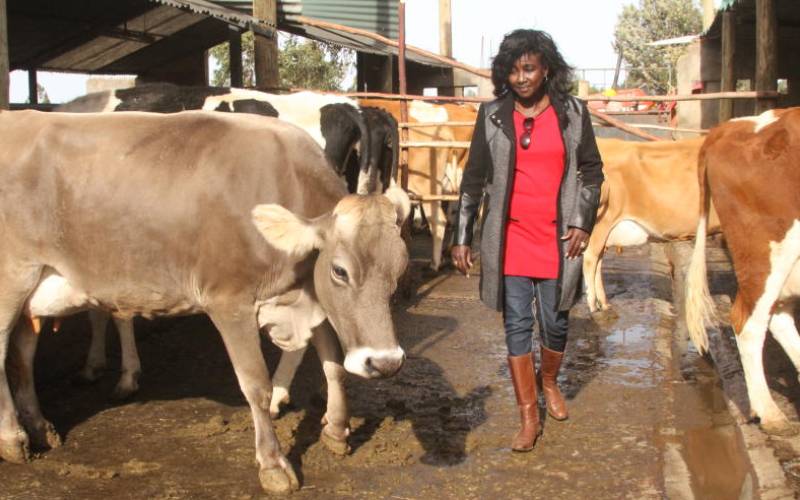 Gladys Boss: I have found peace and satisfaction in my dairy farm
Gladys has embraced technology and integrated it into farm operations to make things run smoothly.
Smart Harvest
By Silah Koskei
5 months ago

Interested in the rabbit business? You do not need a lot of money
The most popular breeds used in the meat industry are New Zealand White, California White, Flemish Giant, French Ear lop, Chinchilla and Dutch.
Livestock
By Dr Paul Kang’ethe
2 days ago
.

Interested in the rabbit business? You do not need a lot of money
Livestock
By Dr Paul Kang’ethe
2 days ago
Why you should not feed rotten grains to cows
Livestock
By Dr Joseph Othieno
2 days ago
Premium
Farmer's fortunes changed by growing cassava
Crop
By Japheth Makau
4 days ago
Kirinyaga farmers take up organic farming
Crop
By Jane Mugambi
4 days ago
Climate Change: Grazing systems cut ASAL Kenya drought risk
Livestock
By Kelley Boss
3 days ago
.