No end to raging debate on toxic pesticides

Joel Mutuma is among farmers who were staring at huge losses after desert locusts descended on his farm and started destroying crops.

On his three-acre farm, Mutuma who hails from Mokuani, Meru County, plants miraa, maize, beans and variety of vegetables.

“The moment a large swam of desert locust landed on my farm, l knew l had lost every crop in the farm. Luckily, a quick response from government, the Food and Agriculture Organisation (FAO) and other partners saved most of our crops,” he says.

Mutuma is referring to how government and partners swung into action, and through Kenya Defense Forces (KDF) and National Youth Service (NYS) sprayed, killed and contained the insects using chemicals, averting further losses.

Thanks to such sustained and consistent efforts, in October, the government declared that the country was free from desert locusts that came twice, 2019 and 2020.

Prof Hamadi Boga, Principal Secretary at the State Department for Crop Development and Agricultural Research says the war on locust was won with minimal damage to crops, pasture and even the environment.

“The partnership saw to it that we had enough chemicals used in spraying desert locusts, equipment, skilled personnel and developed a collaborative relationship with counties to make sure the menace of desert locusts was controlled,” said Prof Boga at a past event at Kilimo House.

Interestingly, as the use of chemicals is being lauded to have helped in the containment of desert locusts in 28 counties, Gladys Shollei, the Uasin Gishu County Women Rep, has petitioned the National Assembly, seeking a total ban on agrochemicals that have been banned in the European Union (EU).

In the petition, the lawmaker argues that the volume of imported pesticides, herbicides and fungicides have more than doubled in four years, posing a risk to health and the environment.

Sources from the Kenya Plant Health Inspectorate Service (Kephis) and Route to Food Initiative confirmed that the volume of imported insecticides, herbicides and fungicides has more than doubled from 6,400 tonnes in 2015 to 15,600 tonnes in 2018.

And, the demand for pesticides has grown because of increased, more intensive agricultural production and the emergence of new pests and diseases.

Experts and other stakeholders now warn that a ban on agrochemicals would reduce crop production. They argue that, without pesticides, there will be no food to feed the growing population.

“The world is struggling to feed the growing population and here we are pushing for the ban on agrochemicals which are technologies being used to prevent pests and diseases. If we withdraw all the products, you will not manage to produce food crops and control pests among them desert locusts,” he says.

Kimunguyi is, however, happy that the targeted pesticides products are being looked at by scientists for risk assessment.

Kimunguyi  also reads malice and politics in the Shollei petition.

“The issue of whether to withdraw pesticides use is eliciting varied reactions but will have a very negative impact on the economy. If we banned those products, Kenya will not afford to feed the population.”

According to him, organic food production alone cannot feed the world. Kimunguyi says it takes 9-15 years for one to have a pesticide product, therefore is not something one wakes up and declares a ban on without scientific backing.

“We are in the tropical climate where pests are in plenty and they can damage crops to a point where you can’t harvest anything,” she explains.

Dr Kimani says when there was outbreak of locusts, it is the chemicals that managed to contain them. She explains that as much as others would want to use biological control products in the management of locusts, their mode of control is slow.

She explains that biological control can only manage desert locust at the source where they are being produced.

“But for the ones that are flying around, you need chemicals that will knock them down,” she says.

Dr Kimani says pesticides will never get out of the market, adding that even European Union farmers still use pesticides.

She says: “When the issue of banning pesticides products came up, we informed the industry that we want to start risk assessment processes, because, whatever decisions we make need scientific backing.”

As the pesticides board, she says before any pesticides are registered in Kenya they do a lot of evaluation, including their harm to humans, animals and environment.

“That way, we recommend how it should be handled and the information is normally on the label of the pesticides,” she shares.

Can organic farming feed the world?

“It is not true that organic farming cannot feed Kenya and rest of the world. You see, 80 per cent of farmers in Kenya are small scale and majority practice organic farming. They use indigenous seeds and manures but not chemical fertilisers,” he says.

To produce even more, Nderitu explains before planting, farmers need to test their soils to know what is lacking and fertilisers they can use.

He says: “And, that is why, we need to have laboratories all over to test manures that are needed in particular soils.”

He affirms the country can still do without agrochemicals. Chemicals produced and used every day cause imbalance to the environment resulting to emerging of diseases and pests like the desert locusts.

“It is not because we are in the tropics. And if you noticed, desert locusts were in specific areas - mostly arid areas where there is no crop diversification and no good agricultural farming practices,” he says.

To contain desert locust, Nderitu says they could as well have used solutions or biochemical which are friendly to the environment.

“To produce food in a health way and for both local and international markets, training institutions, especially those dealing with agriculture need to include components of organic or ecological agriculture in their programmes,” says Dr David Amudavi CEO Biovision Trust Africa.

Amudavi stresses on the need to embrace organic agriculture because people are concerned with what they produce, consume and how that affects their health.

He says organic farming is one of the most lucrative agribusinesses that needs to be promoted in research, investments, in activities that can support production, value addition, processing, marketing, and more importantly, consumption.

But what do the farmers say? Onesmus Malinda, says he cannot do without agrichemicals. Malinda, who lives along Kangundo Road, Nairobi, says for many years he has planted tomatoes, they are always attacked by among other diseases, Tuta Absoluta.

“Every time l plant tomatoes, l have to buy pesticides to help control diseases and pests in my farm. Without these chemicals, l will not harvest anything,” he says.

Safe use of pesticides

Dr Kimani says one of the challenges is that farmers don’t read instructions when they use pesticides, despite labels clearly stating and guiding how one is supposed to handle them.

And, in case of poisoning what one is required to do. Her advice is, if a farmer gets pesticides that are not labeled, or the label is not legible, they should report. She says the government is collaborating with the industry and others to create awareness on safe use of pesticides.

Dr Kimani says dealing with porous borders is tricky because some agrochemicals that are sneaked into the country can be poisonous or are counterfeits.

“What we do is create awareness amongst farmers at the border. We also collaborate a lot with border management committee consisting of different organisations such as Kephis, public health, customs that can report such cases,” she explains.

Ian Shaw, the Managing Director KAPI Ltd, agrees that pesticides have a role in food production. However, the issue is the type of pesticides and level of harm to human and environment that can be permitted. Shaw explains each pesticide is different - some are extremely harmful, others medium and others low level. The focus is to remove the harmful ones and not all.

An independent study by Egerton-based Tegemeo Institute of Agricultural Policy and Development shows farmers will suffer losses of crops with the ban on the proposed agrochemicals.

“The ban on agrichemicals would reduce crop production, increasing reliance on import. Further, an increase in post-harvest losses are expected due to potential ban, with adverse effects on poor households,” says Dr Timothy Njagi, a researcher at the institute.

Dr Njagi advises that instead of a ban, the country needs to consider other options for the safe use of agrochemicals. Kimunguyi says Kenya or even Africa is using five per cent of the total pesticides manufactured across the world. 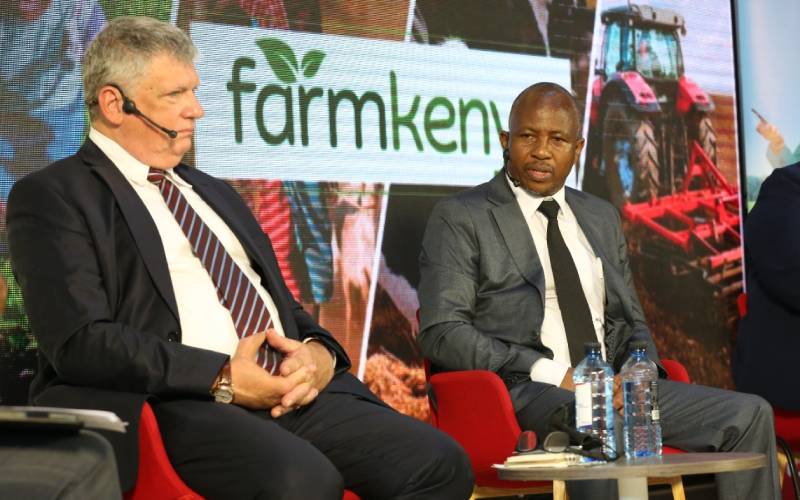 Interested in the rabbit business? You do not need a lot of money
The most popular breeds used in the meat industry are New Zealand White, California White, Flemish Giant, French Ear lop, Chinchilla and Dutch.
Livestock
By Dr Paul Kang’ethe
2 days ago
.

Interested in the rabbit business? You do not need a lot of money
Livestock
By Dr Paul Kang’ethe
2 days ago
Why you should not feed rotten grains to cows
Livestock
By Dr Joseph Othieno
2 days ago
Premium
Farmer's fortunes changed by growing cassava
Crop
By Japheth Makau
4 days ago
Kirinyaga farmers take up organic farming
Crop
By Jane Mugambi
4 days ago
Climate Change: Grazing systems cut ASAL Kenya drought risk
Livestock
By Kelley Boss
3 days ago
.