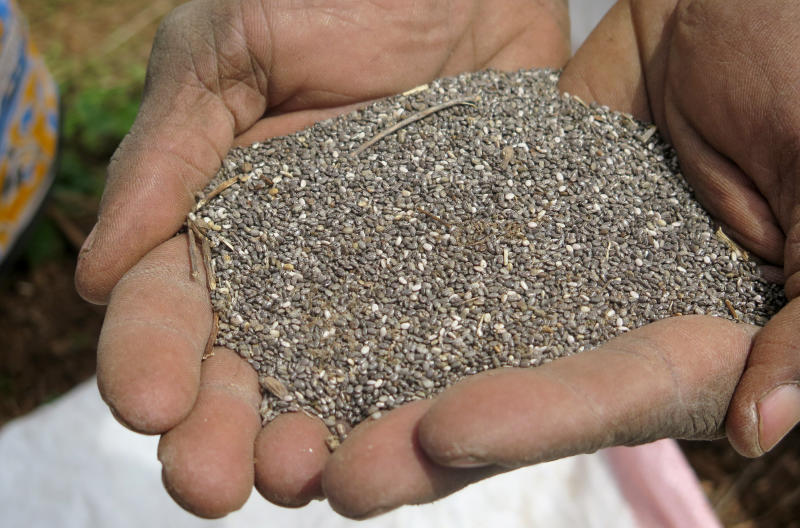 About a kilometre from Ngusisihi market in Meru County lies a two-acre farm covered with a crop that few residents know about — chia.

The chia farm is run by Mr Paul Kithinji. Chia is an edible seed that comes from the desert plant grown in Mexico. According to Kithinji, Chia seeds are foreign crops mainly grown in Mexico, Paraguay, Peru and Bolivia. Chia seeds farming has been practised in Mexico for years.

He says he decided to introduce this farming in Meru County after realising it was leading in cases of cancer, diabetes, arthritis, which can all be managed by eating Chia seeds.

“Few people in our area can also afford a balanced diet and Chia seeds is beneficial as it has all the nutrients needed by the human body,” says Kithinji.

Being a researcher by profession, he learnt about the crop in his line of duty and got interested to pursue it further in 2016.

After extensive research, Kithinji introduced them to Meru County on a trial and error basis.

So far, so good. Though the local market is still unripe, internationally things are looking up.

Recently, a British company made an order of a tonne of the seeds and he is working round the clock to meet this consignment.

“This is not an easy target to meet. That is why we are working extra to hit that target,” he says.

According to his projections, an acre of land can produce about 400 kilos of Chia seeds and a kilo sells at Sh500 locally.

“Generally, Chia seeds will do well in hot and warm environment and where soils have high acidity. It is like wheat,” says Kithinji.

Chia seeds are easy to plant once you acquire the planting seeds.

With the seeds ready for planting, one digs a four-inch wide furrow with a spacing of about two feet.

The seeds are then placed in the furrow through a method similar to broadcasting and covered with a little soil.

Before planting, land is tilled and if not fertile enough, one should add organic manure as opposed to fertilisers which contain chemicals that can affect the antioxidant effect of the seeds.

“You are not allowed to use any chemicals including pesticides and fertilisers. In case of any pests attack, Chia seeds have ability to defend themselves by producing a special sap,” says Kithinji.

Harvesting is partly mechanical and manual. Once mature, the plants are cut and allowed to dry for two to three days before they are crushed using a machine.

Afterwards, they are stored in a sac or a container that cannot allow moisture to get in as this affects the seeds.

“One must observe great hygiene standards when handling the seeds since they can’t be washed using water. It is also impossible to separate it in case it mixes with other small seeds like Terere,” he observes.

To avoid contamination, weeds should be got rid of before harvesting to avoid the risk of their seeds mixing with Chia seeds.

A spoonful of Chia seeds can be mixed in a glass of warm water to form a thick solution.

It should not be mixed with other foods or cooked as it will just turn to be another roughage.

The seeds contain omega 3 which is good for brain and heart, calcium, phosphorus and antioxidants.

They also have capability of extracting cholesterol from blood veins and control of acid which cause inflammations.

Kithinji says he has seen a change in his health since he started eating them.

Going forward, he is appealing to farmers in the county and other regions to adopt this farming.

For those interested, he says some of the areas where Chia seeds do well are Timau, Ruiri, Giaki, Chaaria and Githongo.

Given that there are few farmers growing it, those interested need to connect with farmers like Kithinji who have been planting them.