For years, Elgeyo Marakwet County has been a top producer of honey, but the trend is now becoming a thing of the past.

According to the farmers who spoke to Smart Harvest, they have witnessed a sharp decrease in bee populations due to pesticides that horticultural farmers are spraying on their crops.

In Biretwo, Keiyo South, farmers recall how they would make a decent living from selling honey.

The volumes have reduced significantly as beekeepers are now managing barely half the produce of honey that they would harvest before.

The region that only majored in livestock farming and beekeeping is now embracing crop farming and especially horticultural, thanks to its fertile soils.

Farmers from various parts of the country have over the past years bought agricultural land to practice irrigation farming. And with the availability of good roads, the plot prices have risen.

But despite bees being important pollinators helping watermelon, pawpaw, mangoes, tomatoes, and butternuts farmers get a good harvest, the pesticides used by these farmers are posing a great threat to bees.

Stanley Kangogo, a seasoned bee farmer in Biretwo, said he started noticing change when a neighbouring farmer started spraying his fruit farm. He has been a beekeeper for more than 10 years and dedicated his five acres to beekeeping. He has 30 beehives.

Whereas pesticides help crop farmers get better yields, Kangogo says the effect has been the opposite for them, making many beekeepers quit the venture for crop production or livestock rearing.

“Over the past five years, our bee population has been decreasing. For three years, I have not been harvesting honey as most of the hives have been empty. Before, I would harvest honey four times a year getting at least four gallons during each season which would earn me Sh32,000,” says the farmer.

Kangogo, who is also a teacher, says the effects worsened in 2020 when the government resorted to aerial spraying of desert locusts that had invaded the region and various parts of the country.

He says the chemicals which were meant to kill the destructive locusts and save crops killed all insects indiscriminately, further straining their business.

The farmers called upon the government to consider educating the farmers on how to repel pests without harmful chemicals that can kill the bees.

Another farmer Barnabas Chepkener says the poor harvest has led to high prices of honey due to low supply and high demand.

He says the honey which they mainly sell to the Kerio Valley Development Authority (KVDA) at Sh1,500 per gallon is now Sh2,500.

“In as much as we would wish to get more returns from selling honey, we cannot meet the demand because of this pesticide menace. If we can get pesticides that do not harm bees, we will be so grateful because both crop and honey production is essential,” says Chepkener.

Kipsalgong who has been a farmer for decades has never experienced the challenge and is now calling for experts to research harmful chemicals which should be avoided.

He says whenever he sprays his potato farm, the bees would instead die after feeding on nectar from flowers during the flowering stage and this reduces honey production.

“We no longer consider ourselves bee farmers because we have nothing to show for it. We have realised that increased investment in crop farming and unchecked use of pesticides is rapidly killing bees,” says the farmer.

Tony Nzomo, an apiologist from the Yatta Beekeepers Ltd, says harmful pesticides affect the health of the bees by compromising their immunity, leading to their death and decline in population.

Mr Nzomo says when pesticides are sprayed near beehives, bees feel threatened and move out of their hives.

He adds that some pesticides also tend to alter the DNA of the bees, kill them and also affect the ability of queen bees to forage consequently affecting the production of honey.

“When bee hives are located next to crop farms which are sprayed often, the quality of the honey tends to be compromised. About 14 years ago, Kenya was banned from exporting honey because of poor quality honey as a result of these pesticides,” says the expert.

Sadly, Mr Nzomo says beekeepers have few options for saving their bees, especially in areas where crop farming has been embraced since most farmers do not embrace the use of organic pesticides which are less harmful.

He says crop farmers should spray their farms either very early in the morning between 5 and 6 am or in the evening to reduce the chances of the bees feeding on freshly sprayed flowers.

“Most farmers spray their crops during the day when bees are foraging. Bees collect nectar from flowers and when the crops are sprayed the bees consume the chemicals which are harmful. The pesticides meant to help crops grow healthy harm both good and bad insects, even the bees who are pollinators are not spared,” says Mr Nzomo.

The expert adds that the best time to spray crops planted near bee hives would be in the evening as sprayed crops have fewer effects on the bees when they feed on nectar the next day.

He says climate change was another reason for the decrease in bee population and honey production given that humans interfere with the insect’s habitat.

“Too much rain which results in a very cold climate makes the bees stay in their hives while extended periods of drought lead to a shortage of flower nectars that bees can feed on leading to low production of honey,” says Mr Nzomo.

The expert says the use of banned chemicals should be checked and other alternative environment-friendly interventions be considered by the government.

Uasin Gishu Women Representative Gladys Shollei tabled a petition in Parliament in 2019 that sought to ban more than 262 harmful pesticides and herbicides from the Kenyan market including those that affected the bees.

Ms Shollei says the harmful pesticides had been banned in the UK and US but were still finding their way to the country. She called on the government to increase surveillance on chemicals being imported into the country.

The legislator said the Pest Control Products Board (PCPB) has so far banned seven out of the 262 products citing that the remaining brands were compromised. She blames the PCPB for failing to take quick action by banning the harmful products.

She says pesticides were responsible for causing cancer, respiratory problems, brain damage and neurological problems and also affected the ecosystem and are harmful to the bees as well.

“These pesticides also kill a lot of the good insects, one of them being bees. I wrote to the World Health Organisation (WHO) asking them to ensure that during spraying of locusts in the Northern part of Kenya, they should not use pesticides that have Chlorpyrifos (CPS) which is harmful to other insects,” said the MP. 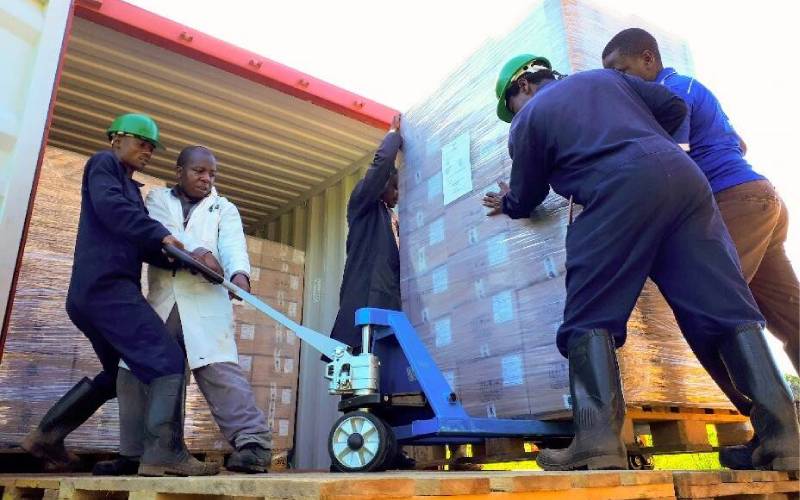 Fresh produce traders praise use of Mombasa port for exports
The shift from air to sea freight is an idea whose time has come for the floriculture sector.
Market
By Philip Mwakio
2 months ago

Why your dog is barking and how to stop it
Dogs communicate through barking, howling, whining and more. However, excessive barking is considered a behaviour problem.
Livestock
By Dr Paul Kang’ethe
5 hours ago
.

Farmers' lobby proposes measures to fix animal feed crisis
Livestock
By Peter Theuri
4 hours ago
Why your dog is barking and how to stop it
Livestock
By Dr Paul Kang’ethe
5 hours ago
Premium
Mastitis: How to prevent Disease that cuts milk production
Livestock
By Dr Joseph Othieno
5 hours ago
My friends persuaded me to start rabbit meat restaurant
Market
By Silas Nyamweya
1 day ago
How to grow 'minji' the amazing green peas
Crop
By Kelvin Ogega
1 day ago
.

Premium
By Jennifer Anyango 1 day ago
Want to grow avocado? Here is what you need to know