How to feed dairy cows for more milk 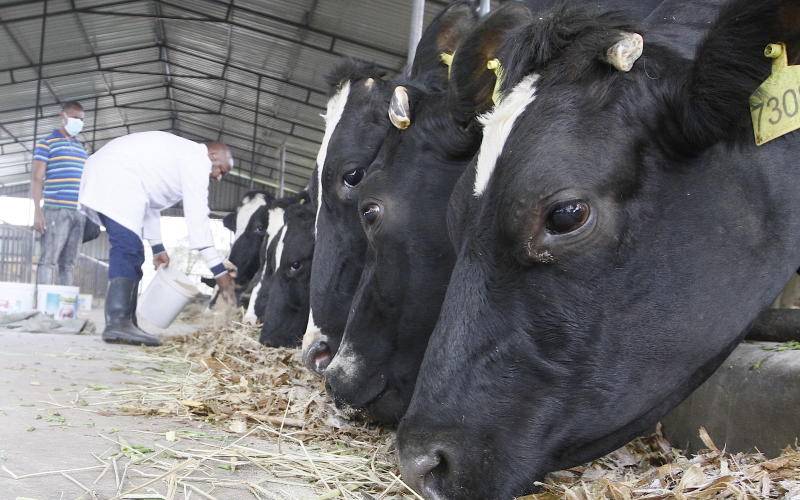 A dairy farmer’s delight is when his cow is producing lots of milk.

And lots of milk is what Kenya needs right now if assertions by Agriculture CS Peter Munya are anything to go by.

Begging the question: how do you prime your herd to yield higher volumes of milk?

Alex Gathii, a Dairy Production, Processing, and Marketing consultant shares the different ways through which farmers can boost milk production while managing the cost of production.

Nutrition and Feeding – Why should you feed your cow? The animal needs food to be alive, to grow, to reproduce, and to produce milk, says Gathii.

Failure to provide the animal with the right nutrition prompts less milk production.

A cow has proper nutrition when it is fed with proteins, energy, minerals, vitamins, fibre, and water.

“A cow receives these nutrients by feeding on forages (plant fibre material like stalks of maize, sorghum, napier grass, or even processed forage like silage) and concentrates (highly nutritious feed from grains and seeds),” Gathii says.

Depending on the availability of these two groups of feeds, a farmer can employ any three forage/concentrate ratios: 60/40, 50/50, and 40/60.

“In total, a lactating cow should consume dry matter equivalent to at least 3 per cent of its body weight,” he says. “For instance, if the cow weighs 600kg then its total feed should amount to at least 18kg of dry matter per day.”

Good forages for dairy cows include grasses such as Kikuyu and napier, Boma Rhodes, lucerne hay, Brachalia, sweet potato vines, desmodium, sorghum, maize, and so on. Good quality maize silage leads to other forages in the nutrition quality.

“A farmer has to either buy or produce and mix their own concentrates,” argues Gathii. The average cow also needs about 200g of minerals (available in agro-shops) per day.

The cow eats throughout 24 hours in the barn with bursts of rest and sleeps in-between. The cow’s meal – mixed up well – should be divided into six potions, which would then be given to the cow throughout the day.

Water intake: Milk is composed of approximately 87 per cent water. Water is therefore the centrepiece around which milk is formed.

“On average, a fully grown dairy cow needs between 80 and 120 litres of portable clean water,” Gathii says. “It is very important that the water be clean because cows won’t drink to their fill from dirty water.”

The water trough, he explains, should be cleaned every day to remove dirt, biomass, organic matter, and germs. 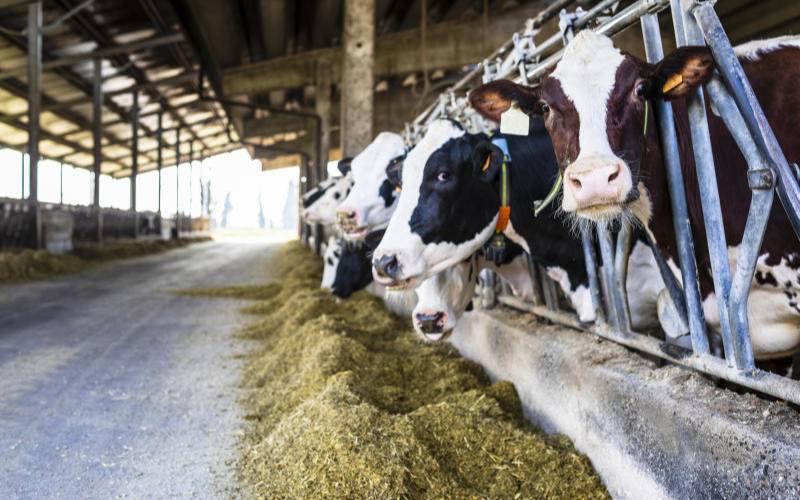 Moses Lang’at, a research scientist on dairy farming at Kenya Agricultural and Livestock Research Organisation (Kalro) points out to a phenomenon where milk production goes up during rainy seasons.

“This goes to show that water is very important in dairy farming,” Lang’at says.

Water stress – a situation where the animal is not able to access its full water needs – automatically diminishes milk production.

To reduce water stress, Gathii advises farmers to segment herds into groups of three cows sharing a trough instead of the whole herd drinking from the same container.

“If the cow is not properly fed it will become stressed. The same applies for watering and all other nutritional needs,” Gathii says.

However, there are other subtler forms of stress that most farmers seldom pay attention to, but which impact the cow’s ability to produce lots of milk.

“To start with, housing!” Gathii says. “The cow barn is supposed to provide the animal with maximum lighting, unhindered air circulation, feeding space, and space to rest.”

The cow’s resting place should be cleaned every day. Droppings, urine, and other matter should be picked up regularly to leave a clean environment.

A cow barn with a raised roof (at least 4m in height) is ideal for air circulation. And the cows should be segregated into smaller groups to avoid social stress.

Cow bedding should be dry and soft. Farmers can use organic matter like sawdust. Gathii however prefers sand – “because it is inert and unlikely to cause disease.”

“One of the skills I learnt – and which I brought home with me – was playing soft entertaining music to lactating cows,” he says. “It gives them comfort and de-stresses the animals, allowing it to produce milk in abundance.”

Playing music, Letangule says, is an extra measure of ensuring the cow is comfortable and in high spirits.

Exploit genetic potential: According to Lang’at the best prolific dairy cattle are exotic ones.

He says: “Friesians are at the top in this regard: they produce, on average, the most amounts of milk. Ayrshire follows closely. Then Guernsey and Jersey wrap up the top four most prolific dairy breeds.”

Indeed, for Letangule, genetics mattered from day one going into dairy farming.

“My interest was in cows that would produce milk in abundance. I would not have spent money investing in dairy farming just for the sake of it,” Letangule says.

He chose the pure Holstein Friesian breed – the largest dairy cow by size – which he had come to learn was the best milk producer in Kenya.

Each adult cow cost him Sh250,000. The investment, he says, was worth it because the cows produce an average of 30 litres of milk per day.

According to Lang’at, indigenous cattle breeds like the Boran and Zebu produce very little milk compared to exotic breeds.

However, he says, crossbreeding might provide farmers with units that produce almost as good as the exotic breeds.

According to Gathii, the best dairy cows have certain physical features: high body frame, large and wide in size, and a well-developed udder.

Regardless of the breed, Gathii says, a dairy farmer can consistently test the breed’s potential by gradually increasing its food and water intake.

“At the point the cow stops producing more milk, that would be its dairy potential,” he says.

“I have worked with dairy farmers for 12 years now and my conclusion is that most of them ignore the need to employ skilled staff.”

Because many Kenyans have a lowly view of farming there is a propensity to hire illiterate staff. “This is one of the reasons some farmers end up making losses because their cows are not handled with the skills to ensure their health and well-being.”

A manager of a dairy farm, Gathii says, should be able to perform basic health maintenance procedures like vaccinations, parasite control and deworming.

“You need a manager and farmworkers who understand a cow’s gestation, behaviour, nutritional needs and so on.”

Joseph Mutuku, a dairy farmer in Makueni, is fully committed to managing his herd.

“My job ranges from silage making, propagating forages like Lucerne and Napier grass, to deworming the cows and spraying against parasites,” he says.

Mutuku says dairy cows are sensitive and milk production can be affected by lack of basic care.

Records are important in tracking progress and identifying points of improvement, he says. 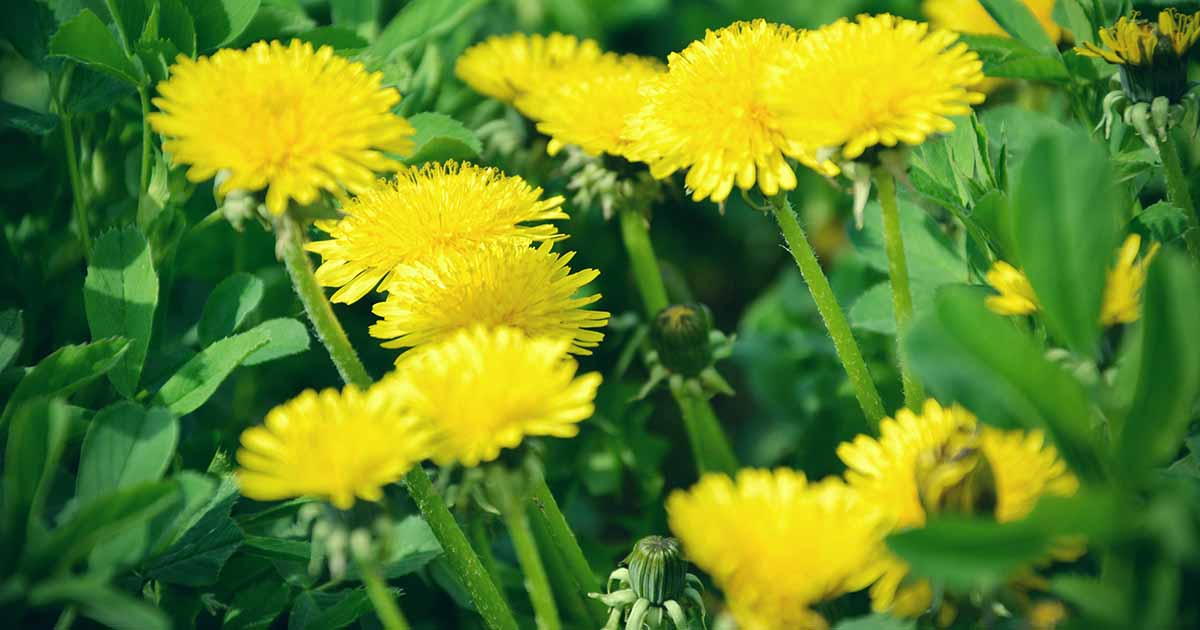 How to identify 10 edible weeds from your backyard.
Instead of reflexively removing weeds, take a moment to identify the invaders and make a more rational decision.
Crop
By Edward Kosut
Mar. 22, 2022

Coffee theft push farmers to employ guards
Some of the culprits have also targeted the farms during the day while the families are not working.
Crop
By Edward Kosut
Dec. 01, 2022
.