Speaking yesterday in Sharm el-Sheikh, where the 27th session of the Conference of the Parties to the United Nations Framework Convention on Climate Change (UNFCCC), popularly known as COP27 is taking place, Ms Tuya reiterated Kenya’s stand on the climate crisis.

“Kenya is suffering from its worst drought in 40 years. More than three million people live with food insecurity, and many have become displaced. Climate change is a global problem requiring global solutions, but developing countries are bearing the brunt of this crisis. What we need is urgent finance to address these burdens,” Ms Tuya said.

With COP27 taking place in Egypt, negotiators from developing countries hope the outcome will better reflect the needs of the climate vulnerable compared to COP26 which took place in Glasgow in 2021. At the high-level summit, African countries normally speak with one voice and make collective demands. Ahead of the conference that starts on November 6 and ends on 18, the African team has set a new six-point plan to ensure the summit that has been termed ‘Africa’s COP27’ successfully tackles the climate crisis. The roadmap has been developed by delegations from across the vulnerable country blocs which negotiate at the UNFCCC.

The six-point plan includes the delivery of climate finance and other support to Africa and other developing countries.

“Success at COP27 ultimately rests on its ability to get money flowing from wealthy countries to those most in need – at the pace and scale required to match the climate crisis. One of the biggest points of tension at COP27 will be the developed world’s failure so far to fulfil its promise to mobilise $100 billion per year in finance by 2020. As well as meeting that sum, developed countries need to set out how they will increase it from 2025,” stated the communique from the African team.

The second area of concern is strengthening adaptation support. The team argues that the developed countries under the UNFCCC and the Paris Agreement are required to assist developing countries meet the costs of adapting to the adverse effects of climate change.

According to them, adaptation is good for the economy as investing $1.8 trillion in adaptation between 2020 and 2030 could generate $7.1 trillion in benefits. At COP26, developed countries agreed to double financial support for adaptation to $40 billion per year, but they have not yet done this.

“COP27 can be where we finally close the adaptation gap,” the group says.

The third area of focus is addressing climate-induced loss and damage. The team argues that at the brutal level climate change has hit Africa, there are certain impacts that can no longer be adapted to, resulting in unavoidable losses and damages to some of the world’s poorest people. In Kenya for instance, Lake Baringo has swelled so much displacing people from their ancestral lands and even swallowing institutions like schools and hospitals. It is worth noting that the current financial and institutional arrangements under the UNFCCC and its Paris Agreement are not sufficient to enable African and other developing countries to address such losses and damages fully and effectively. Therefore, COP27 needs to see the creation of a Loss and Damage Fund.

“Many countries, developed and developing, have committed to reach net zero emissions by mid-century. But emissions have yet to fall, as global emissions returned to pre-pandemic levels. It is therefore critical that all countries, in particular developed countries, submit concrete and ambitious National Determined Contributions and long-term low emission strategies in line with keeping temperature rise below 1.5 degrees centigrade,” they note.

The fifth area that the African team is pushing for is supporting Africa transition to clean energy. Evidence shows that Africa has an abundance of renewable energy which includes enough wind and solar to become a clean energy superpower. Kenya for instance, produces more than 90 per cent of its electricity from geothermal plants. The delegation notes that for geo power to be harnessed, it needs investment and plans for sustainable development that would see new jobs and industries created.

The sixth issue on the table for the African team is using the UN’s ‘Global Stocktake’ to put fairness at the heart of the climate negotiations. UNFCCC describes the Global Stocktake (GST) as a key element of the Paris Agreement. The first GST was launched at COP26 in Glasgow, with the first session of its Technical Dialogue held in Bonn at the June 2022 session.

“We need this to be a rigorous process that accurately captures the collective progress, or lack thereof, on mitigation, adaptation, loss and damage and means of implementation towards delivering the goals of the Paris Agreement so we know what still needs to be done to tackle the climate emergency,” says the group.

“Africa is already experiencing severe and widespread impacts of climate change causing devastation to lives, livelihoods and the continent’s development trajectory. And this is a clear manifestation of climate injustice.

Mohamed Adow, Director of Power Shift Africa, a think tank on climate change based in Nairobi stated that COP26 did not deliver much and this year countries have a chance to put things right and get the world back on track.

“Last year was a COP hosted in the global North and the result reflected global North interests at the expense of the climate vulnerable. Coming out of Glasgow, rich countries failed to keep their promise on climate finance, there was little progress on creating a fund for loss and damage and there was a lack of binding emissions reductions. This year we have a chance to put things right and get the world back on track.

He added: “We need to see the victims of the climate crisis put front and centre, with their needs prioritised and those that are most responsible taking real action to address the climate emergency.” World leaders including US President Joe Biden and France’s Emmanuel Macron are due to attend the summit. 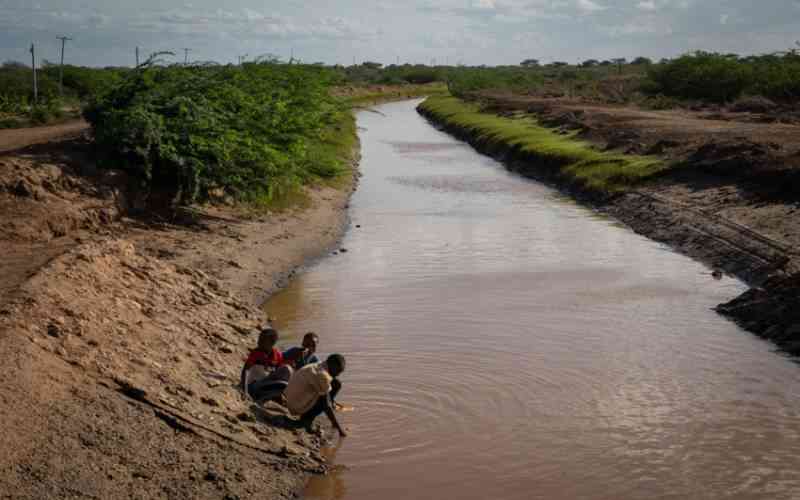 How technology can boost dairy farming Smart agriculture
The technology comes at a cost but it has handsome returns on investment.
Technology
By Winfrey Owino
Jan. 27, 2023
.