New bean variety cooks faster and has no gas

Scientists have now developed new bean varieties which are drought, pest, and disease resistant and fortified with zinc and iron. According to the lead scientist in the project Dr. Beatrice Kiage, the new beans are also early maturing making them advantageous in the wake of climate change.  In addition, the beans take significantly less time to cook compared to the conventional bean varieties thus saving on fuel.

The project known as Ziron Pulse is funded by the James Anton Institute with Food, Agriculture and Natural Resources Policy Analysis Network (FANRPAN), University of Nairobi, Kenya Agricultural Livestock Research Organisation (Kalro), and the University of Aberdeen in the United Kingdom. According to Dr. Kiage, who works with FANRPAN, an NGO that deals with nutrition, the project was undertaken to help solve the issue of zinc and iron deficiencies in certain populations like children.

“Zinc and iron deficiencies are common in children under the age of five and cause stunted growth. The issue can be solved when children start eating beans right from when they are weaned. We are also targeting pregnant and breastfeeding women. We want to make sure that when the woman conceives she has enough zinc and iron in her body as well as her fetus. To fix the malnutrition issue, we have chosen beans because they are highly consumed, are versatile, cheap, and easily available compared with other protein crops,” says Dr. Kiage.

With 26 per cent of children in danger of stunting,  Dr. Kiage says such children have compromised intelligence quotient, terming it a worrying trend since when they grow up they will earn 22 per cent less income compared with other adults.

“As a country, we cannot develop with the issue of stunted being with us and that’s why we looked into solving this issue by using beans as every household consumes this crop. We came up with beans varieties with high value of zinc and iron which include Nyota, Faida,  Angaza, and Cheupe which are being developed by the University of Nairobi while varieties like Nyota are available at Kalro Katumani in Machakos and will soon be in the market. The beans have less gas compared to other varieties,” Dr. Kiage says.

The project also seeks to teach consumers new ways of preparing beans. A study by Ziron reveals that Kenyans are not creative in the ways they consume beans.

“We are only eating githeri and boiled beans. Kenyans need to get different ways of consuming beans so that it becomes appealing to children,” Dr. Kiage says.

Towards this goal, the team has come up with 40 recipes to make bean cakes, cookies, chapatis, mandazi, kebab, and porridge among others.

According to Caroline Mwenze, the Kieni East Sub County Agriculture Officer, the area is classified as an arid area with cold and dry climatic conditions.

Mwenze, an agronomist, adds that Kieni being on the leeward side of Mount Kenya, the area receives low rainfall.

To address the situation, they promote technologies such as water harvesting, drought-tolerant seeds like beans, and other low-attitude crops. 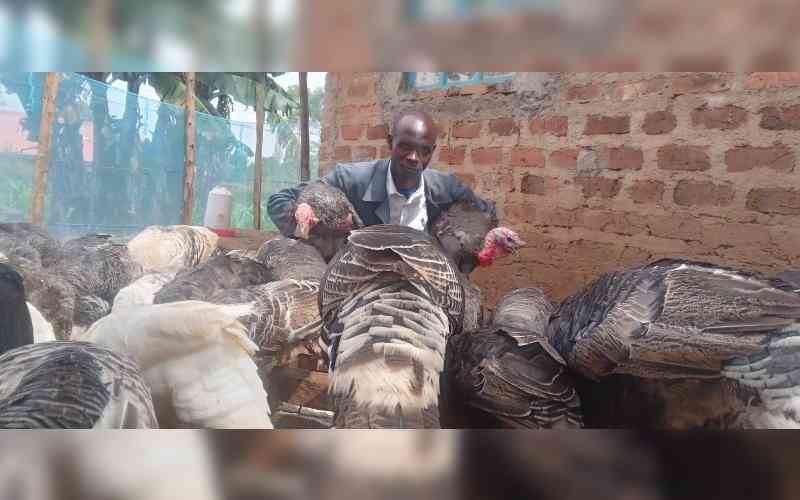 My turkey business came after crippling job loss
To start off, Osunga used Sh40, 000 from his savings to buy four turkeys from a referral source.
Livestock
By Anne Atieno
Nov. 12, 2022

How technology can boost dairy farming Smart agriculture
The technology comes at a cost but it has handsome returns on investment.
Technology
By Anne Atieno
2 hours ago
.