Wangui Muchangi is a vegetable farmer at the Mwiki area in the outskirts of Nairobi and she grows sukuma wiki, spinach and a couple of indigenous vegetables.

Whenever a visitor arrives at her farm, you will not fail to spot a green canopy of the crop swinging away from the wind. The farm is about five kilometers from Mwihoko.

She grows traditional vegetables like black nightshade popularly referred to as managu or sucha, amaranths (terere) and spider plant (saga/saget).

“They are my number one source of income, as they are on high demand in Nairobi city,” she says.

Wangui, who is a mother of four, cultivates the crops on one-acre of leased land. We find her preparing a portion of land, that she says she is planning to sow cowpea leaves and spider plant. Adjacent, some black nightshades are under harvest.

Spider plant vegetables planted about three months ago are depleting. “I allow some to mature in order to acquire seeds. That way, in reduce expenses,” explains the farmer.

Besides being on high demand, traditional vegetables take a relatively short period of time to mature for harvest after planting. For instance, cowpea leaves, spider plant and kansera mature within twenty-five days. “More so, their seeds are planted directly,” Wangui says, applauding the move as a way of reducing operating costs.

Amaranthus and black nightshade, require seedlings for transplant, implying that seeds have to be sown in a nursery bed for nurturing. Sukuma wiki and spinach are also planted from seedlings. Most plantlets take about a month for a transplant.

She has dug several wells on the farm, water oozing from beneath, which supply her with adequate water. “I have a generator for pumping and watering. I bought it through the venture,” explains the farmer. Initially, Wangui was working as a casual laborer in the Kenya Railways Corporation, assigned to uproot grasses along railway lines between Ruiru and Nairobi, among other manual jobs.

However, she insists that she regrets no more quitting it in 2017 for farming.

“Traditional vegetables are very lucrative. Were it not for land shortage, I would grow them in large scale,” she notes.

A kilo ranges between Sh20 to 50, her clients being mama mbogas mainly from Nairobi. Some also come from Kiambu County.

In a move aimed at evading the high cost of fertiliser, Wangui says she prefers using compost manure, a 90 kilos bag going for Sh150. “I incur Sh50 cost to transport each bag to the farm, its way far economical,” explains the farmer, adding that besides reducing expenses, she is able to grow the vegetables organically.

Traditional vegetables are rarely affected by diseases, pests being the only challenge Wangui grapples with. Common vegetables’ diseases are downy and powdery mildew, bacterial wilt, damping-off, leaf spot, and black rot, among others. 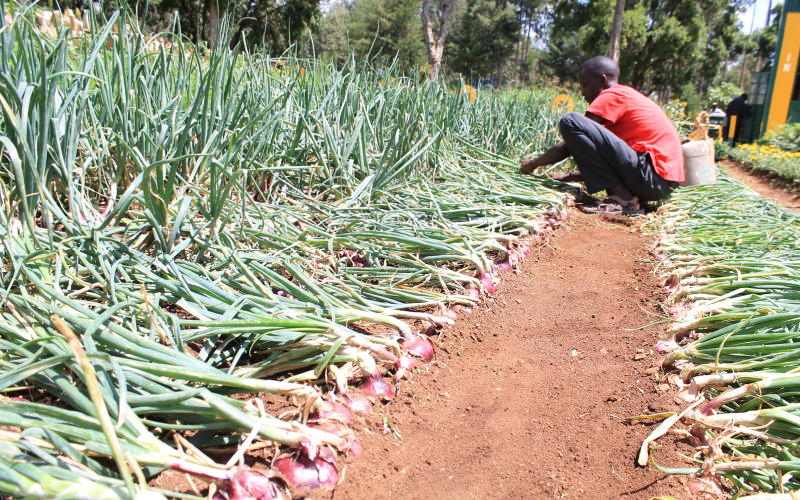 How to grow finest onions in the market
When growing onions commercially in an area where downy mildew was an annual event, it is advisable to carry out preventative spraying.
Crop
By Standard Reporter
2 weeks ago