How to identify 10 edible weeds from your backyard.

Crop
By Jennifer Anyango | 3 months ago

Gardening is power. Did you know that some weeds we are always worried about in our yards and Gardens are actually good for you, and can be delicious if prepared properly?  Be sure to identify the weeds correctly and avoid harvesting from suspect places (trust your garden)

Not all weeds are ugly. Any plants typically categorized as weeds can actually be very beneficial to your garden. Instead of reflexively removing weeds, take a moment to identify the invaders and make a more rational decision. Here are 10 garden weeds you actually should not get rid of.

Dandelion is one of the healthiest and most versatile vegetables on the planet. The entire plant is edible. The leaves are like vitamin pills, containing generous amounts of vitamins A, C and K — far more than those garden tomatoes, in fact — along with calcium, iron, manganese, and potassium.

For your garden, dandelions have very deep root systems that drag nutrients up toward the surface, where less-hearty plants can more easily get them, so they tend to improve the overall health of your plants. Plus, there’s the age-old joy of blowing the seeds off a mature dandelion and watching them head off to colonize someone else’s garden.

You can eat the bright, open flower heads in a lightly fried batter. You can also make a simple wine with the flowers by fermenting them with raisins and yeast. If you are slightly adventurous, you can roast the dandelion root, grind it, and brew it like coffee. It's an acquired taste. You might want to have some sugar on hand.

Being a farmer, you have to be careful with purslane because it is very aggressive and grows incredibly quickly.

Slack off on a purslane invasion and before you know it, your garden is all purslane because it will form a carpet that blocks any other plants from catching sunlight.

If you do control it, though, purslane can be an attractive ground cover—and an excellent addition to your salads, as it’s delicious and packed with vitamins and minerals.

Purslane grows in cracks, aside from being surprisingly tasty for a crack dweller, purslane tops the list of plants with omega-3 fatty acids, the type of healthy fat found in salmon.

If you dislike the bitter taste of dandelion greens, you still might like the lemony taste of purslane. The stems, leaves and flowers are all edible; and they can be eaten raw on salads — as they are prepared worldwide — or lightly sautéed.

“You should keep a few things in mind, though, before your harvest. Watch out for spurge, a similar-looking sidewalk-crack dweller. Spurge is much thinner than purslane, and it contains a milky sap, so you can easily differentiate it,” said Stephen Mwanzia, a farmer.

Also, your mother might have warned you about eating things off the sidewalk or cracks; so instead, look for purslane growing in your garden, or consider transplanting it to your garden from a sidewalk.

Further note that some incorrectly call purslane "pigweed," but that's a different weed — edible but not as tasty.

Lamb's-quarters are like spinach, except they are healthier, tastier and easier to grow. Lamb's-quarters, also called goosefoot, usually need more than a sidewalk crack to grow in, unlike dandelion or purslane. Nevertheless, they can be found throughout the urban landscape.

Although lamb’s quarter is edible, it is never going to be anyone’s first choice for a meal. Still, it is very useful in your garden because it tends to pop up in tired soil that has lost a lot of its nutrients, and then does the job of re-energizing it. If you see some lamb’s quarter sprouting, let it do its job and recondition your soil. The rest of your garden will thank you.

“The best part of the lamb's-quarters are the leaves, which are slightly velvety with a fine white powder on their undersides. Discard any dead or diseased leaves, which are usually the older ones on the bottom of the plant,” said Mwanzia.

Broadleaf plantain is an odd-looking plant, which is why many gardeners try to boot it from their land. But it is actually a great one to have because it is a natural fertilizer, meaning the plant blooms, then wilts, leaving its leaves (and sometimes roots themselves) to decompose and enrich the soil, making it easier to grow everything else.

And broadleaf plantain plants are entirely edible, very good for you, and have some terrific medicinal properties.

“Part of the confusion is that plantain shares its name with something utterly different, the banana-like plantain, whose etymology is a mix of Spanish and native Caribbean. The so-called weed plantain, or Plantago major, was cultivated in pre-Columbus Europe; and indeed Native Americans called it "the white man's footprint," because it seemed to follow European settlers,” Mwanzia said.

Plantain has a nutritional profile similar to dandelion — that is, loaded with iron and other important vitamins and minerals. The leaves are tastiest when small and tender. Bigger leaves are edible but bitter and fibrous.

Pan-fry in olive oil for just a few seconds to bring out this taste. The longer, browner shoots are also tasty prepared the same way, but the inner stem is too fibrous. You'll need to place the shoot in your mouth, clench with your teeth, and quickly pull out the stem. What you're eating are the plantain seeds.

There are two reasons to let chickweed flourish in your garden. Firstly, chickweed is edible, and can add a special something to your salads or stews.

Secondly chickweed only grows in soil with unbalanced mineral profiles—with low calcium and high potassium or sodium, for example—so its presence is a sign you should test and fertilize your soil before the rest of your garden starts to fail.

Identified by purple stems, fuzzy green leaves, and starry white flower petals, this weed is a fantastic source of vitamins A, D, B complex, and C. It also contains minerals like iron, zinc, calcium, and potassium. Chickweed (Stellaria media) has a cornsilk-like flavor when eaten raw, and tastes similar to spinach when it is cooked.

Other than the occasional four-leafed clover hunt, this common lawn weed goes mostly unnoticed, even though it is becoming popular as a lawn replacement altogether.

Clover is an important food for honeybees and bumblebees, and clover leaves and flowers can be used to add variety to human meals as well.

If your garden is a target for rabbits and other hungry critters, clover is a great distraction that will keep them busy—and away from your other plantings. Clover also enriches the soil with nitrogen (and attracts earthworms, which also help fertilize), so letting it have its way in your garden will make your soil richer and your garden bright.

Mallow, or malva, is also known as cheeseweed, due to the shape of its seed pods, and can be found in many lawns or garden beds across Africa.

The leaves and the seed pods are both edible, either raw or cooked, and like many greens, are often more tender and palatable when smaller and less mature. The older leaves can be used like any other cooked green after steaming, boiling, or sautéing them.

The leaves of the wild amaranth, also known as pigweed, are another great addition to any dish that calls for leafy greens, and while the younger leaves are softer and tastier, the older leaves can also be cooked like spinach.

The seeds of the wild amaranth can be gathered and cooked just like store-bought amaranth, either as a cooked whole grain or as a ground meal, and while it does take a bit of time to gather enough to add to a meal, they can be a good source of free protein.

It sounds like a cruel joke, but stinging nettles — should you be able to handle them without getting a painful rash from the tiny, acid-filled needles — are delicious cooked or prepared as a tea.

It is understandable that people try to get rid of these plants when they invade, but there are reasons to cultivate stinging nettles. For one, if you want to fertilize your garden organically you can boil stinging nettle leaves for half an hour, then remove the leaves and add the infused liquid to what is already in your watering can.

Two, they are edible. The tiny needles fortunately fall off when steamed or boiled. The trick is merely using garden gloves to get the nettles into a bag.

Nettles tastes a little like spinach, only more flavorful and more healthful. They are loaded with essential minerals you won't find together outside a multivitamin bottle, and these include iodine, magnesium, potassium, phosphorous, silica and sulfur. Nettles also have more protein than most plants.

Many gardeners confuse goldenrod with ragweed. The plants are related, but ragweed produces huge amounts of pollen that irritated anyone with allergies for miles around, whereas goldenrod is a plant you should welcome into your garden area.

As the name implies, goldenrod plants bloom into bright yellow flowers that are actually quite pretty—ragweed flowers are tiny and easily overlooked in contrast. Goldenrod is an important source of nectar for bees and other pollinating insects, so letting them flourish is good for everybody.

Mwanzia has the wild edible seed packages on sale. 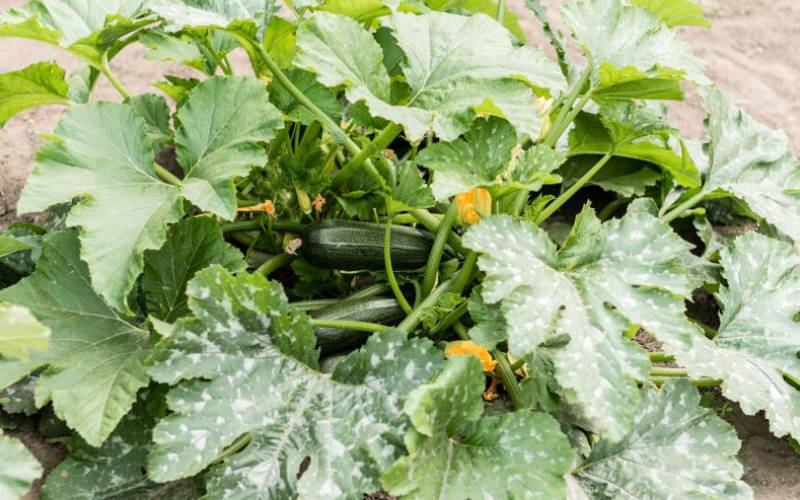 Why your cucumber leaves are whitening
The more energy they can get from sunlight, the larger their bulbs grow.
Crop
By Dr George Mbakahya
3 months ago

Media and its role in food security and climate action
We need to constantly break down what food security means in terms of actions that are guided by the four pillars: availability, access, utilisation and stability
Events
By Njoki Thuo
1 day ago
.

Media and its role in food security and climate action
Events
By Njoki Thuo
1 day ago
Everything you need to know about growing green grams
Crop
By Kelvin Ogega
1 day ago
Honey bees feeling cozy in concrete beehives
Livestock
By Kelvin Ogega
4 days ago
Cassava value added products
Crop
By Jennifer Anyango
4 days ago
Farmers trained on disease and tsetse fly control
News
By Isaiah Gwengi
5 days ago
.