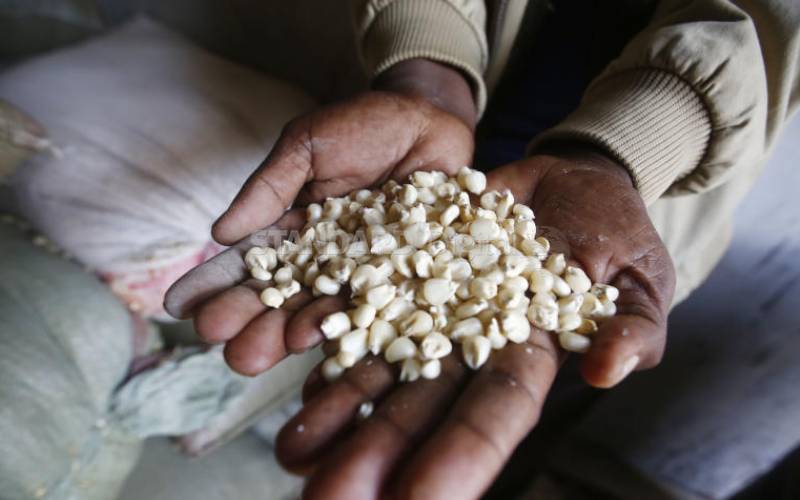 The National Cereals and Produce Board (NCPB) opened its gates for commercial maize purchase on Monday to a slow response by farmers in the North Rift region.

Unlike in the past when maize producers could flock silos and depots, the cereals board regional office in Eldoret recorded a low turnout. Officials were however optimistic that the process will pick up in the next few days.

NCPB stores across the country have remained empty and their gates shut for more than a year after the government failed to procure stock from farmers in the last season’s harvests through the Strategic Food Reserve (SFR) programme.

On Tuesday, farmers who spoke to The Standard welcomed the move to open NCPB facilities but urged the government to review maize producer price from the current Sh2,500 per 90kg bag to at least Sh3,000.

Gilbert Rotich, the NCPB North Rift regional manager, said all depots were now open for commercial maize purchase for 2020-21 and urged farmers to supply their produce.

“We target to buy a million bags of maize at Sh2,500 per 90kg bag as directed by President Uhuru Kenyatta. Farmers will receive pay in within 24 hours upon delivering produce,” said Rotich who added that the board also buys a 50kg maize pack at Sh1,385.

The manager urged farmers and other stakeholders to take advantage and supply produce adding that other services, including maize drying to the recommended moisture content of 13.5 per cent, is available at subsidised costs.

“Maize intake parameters include a moisture content of 13.5 per cent. Drying services will be available at subsidized rates for farmers with grains of higher moisture content to a maximum of 18 degrees centigrade,” said Rotich.

The manager added: “Drying will be at a cost of Sh20 per drop of moisture content per 50kg bag to the recommended 13.5 per cent.”

It implies that a farmer whose grains are at 18 degrees centigrade will need to drop to 4.5 per cent at the rate of Sh20 each hence costing Sh90 to dry a bag of 50kg of maize.

David Kiprotich, a maize farmer from Soy sub-county in Uasin Gishu, said the Sh2,500 producer price set by the government is too low and urged President Uhuru to intervene and consider raising it to Sh3,200 per 90kg bag.

“The cost of production is steadily increasing and we urge the government to review upwards the cost of our harvests,” said Kiprotich.

“Millers and traders are currently offering farmers Sh2,500 at the farmgate. The government should review prices offered at the cereals board and pay farmers at least Sh3,000 per 90kg bag. If NCPB sticks to Sh2,500 in commercial maize purchase, it may not achieve its targets,” said Kolum.

Kolum said a farmer spends up to between Sh2,800 and Sh2,900 to produce a 90kg bag of maize and that additional costs of transport to cereals board will translate to losses.

On Monday, Clement Kipkoech, a farmer from Kaptagat, was the first to deliver his produce to NCPB for commercial purchase. He supplied 100 bags each of 90kg and was optimistic he would receive his dues promptly as promised.

“Conditions in place for maize purchase are attainable and farmers should take advantage and supply their produce to NCPB,” said Kipkoech.

Farming ideas that will be lucrative in 2021