Farmers use beehives to keep elephants out of their farms 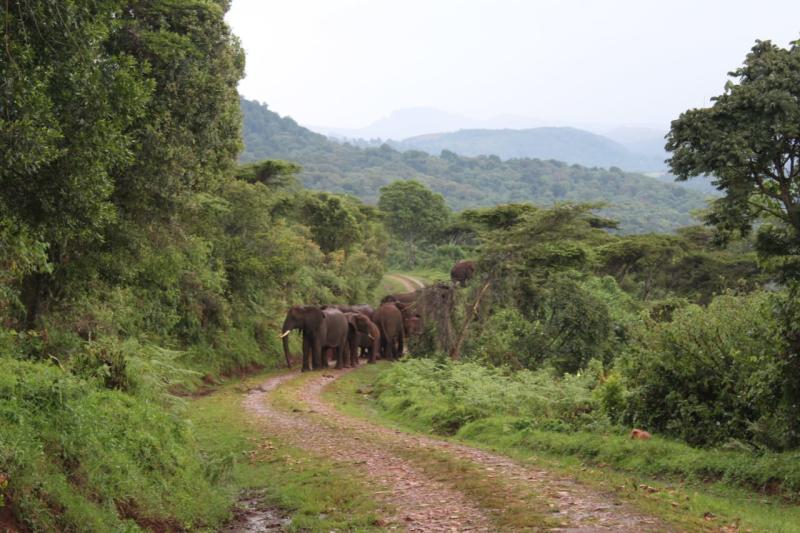 It’s Sunday afternoon in Kitum village, at the slopes of Mt. Elgon, Trans Nzoia County. Villagers have convened to celebrate this season’s bumper harvest of maize, bananas and honey.

Hot tea and milk are being served to visitors to help them beat the chilly Elgon weather. Three elderly men are clearing the site after completing thatching a traditionally made silo, silently incanting words of blessings in Sabaot dialect.

For years, the villagers have been counting losses and some even abandoned their farms owing to the increased cases of human-elephant conflict. Two people from the area have so far been killed by elephants while guarding their farms and herding cattle.

Nevertheless, after the introduction of the beehive fencing in the homesteads near Mt. Elgon National park, acres of land are now green with varieties of crops including; maize, banana, peas, onions and French beans.

Joseph Kiboi, has lived in Kitum village for over 55 years now, and he vividly understands the predicaments residents have faced for years.

“Locals used a variety of methods to protect their crops from elephants like erecting scarecrows, building barriers and lighting fires. Some even set up metal string fences but still the elephants always found ways to beat the measures. This underscored the urgent need to develop effective, non-lethal methods,” he narrates.

He remembers well when the electric fence was being destroyed in 1992 during the violence that preceded the national election.

Kiboi further adds even after the government repaired the 21-kilometre fence at a cost of Sh25 million, human-wildlife conflict continued as animals found ways of subverting the barriers.

Two years ago the state department of livestock and Mt Elgon National park management introduced an innovative project to introduce bee hives along the border of the park to help reduce cases of human wildlife conflicts.

According to the Elephants and Bees Project, a collaboration between Save the Elephants, Oxford University, and Disney’s Animal Kingdom, the beehive fences in Kenya have a success rate of 85 per cent.

Chairperson of Mt. Elgon Bee Keeping group Ben Masibo says now life has literally returned to the village that had been deserted when the fence was destroyed by unknown people.

"When all seemed to be lost, then the idea of beehive for fencing was sold to us by the management of the Mt. Elgon National park.  For decades, we have been making beehives deep inside the forest, and now were being advised to install them along the park border to stop elephants," Masibo said.

He narrates, that the beehive programme also helped the game park management curb the issue of regular fire outbreak resulting from illegal harvesting of honey inside the park.

"The entire community had no idea that the beehive could be used to block crop raiding by elephants. We noticed that the hives were scaring the elephants away. We were advised to settle on the Top Bar Hives and Langstroth Hives as they swing efficiently in the Beehive Fence, and they provide best honey yield,” he says

Masibo observes that the beehives have not only helped the community reduce the cases of human-elephant conflict, but also assisted in broadening the income base of the residents as they can now earn from bee farming.

Last year, the community accumulatively, made over Sh540,000 from honey, the area has potential to earn the community over Sh20 million per season if the project will be well invested.

Caren Ndiwa, a mother of 5, says beekeeping has turned out to be a thrilling venture for her. It has given her hopes that even with irregular prices of crops, she can still continue earning from her farm.

“I have many beehives, and this season I was able to earn over Sh30,000 and I hope next season I will be able to earn more. I plan to increase the number of beehives in my farm and also along the park borderline. This will enable me to finance the education of my children,” says Ndiwa.

She says that the beehive fencing initiative has immensely broadened her understanding of elephants and beekeeping.

“We have enough water in this area and many trees with flowers, meaning we can make a lot of money through beekeeping, sadly, few women in this area can afford this. That is the reason I am calling on the government to initiate a programme that will help more women acquire beehives,” she added.

“Based on what is naturally available in the area, there is a need to invest in beekeeping because compared to other types of farming, the capital needed is minimal. The objective is to engage the community in what can give them an income and also help minimize the human -wildlife conflict,” she says.

Women hit more by climate risk than men
Cultural norms and gendered discrimination in entrepreneurship influence the sectors and businesses women tend to work.
News
By The Conversation
18 hours ago
.