News
By Edward Kosut | 1 year ago

Since the start of the year, factories, including those under the Nyayo Tea Development Zone and Kenya Tea Development Agency (KTDA), have seen a drop in prices for their produce from Sh30 to about Sh17 per kilo.

This has forced farmers to sell their produce in the local market at lower prices to avert losses.

Tea Farmers Association Chairman Simon Mutai, however, linked the drastic fall in the prices of tea to poor management of the sector in the country.

“Initially, there weren’t great variations in the prices from the factories. When the pandemic hit the country, suddenly tea buyers took advantage to exploit the farmers by blatantly reducing prices by Sh10,” he said.

Elijah Maiyo, a small-scale farmer in Chesumei Sub-county who has been selling tea to one of the Nyayo Tea Development Zone processors, said he has not been receiving fair pay for his produce despite huge costs incurred in maintaining his crop.

“When they buy tea at Sh19, remember I need to pay tea pickers Sh10 per kilogramme and the rest will towards buying fertiliser and upkeep,” said Maiyo. 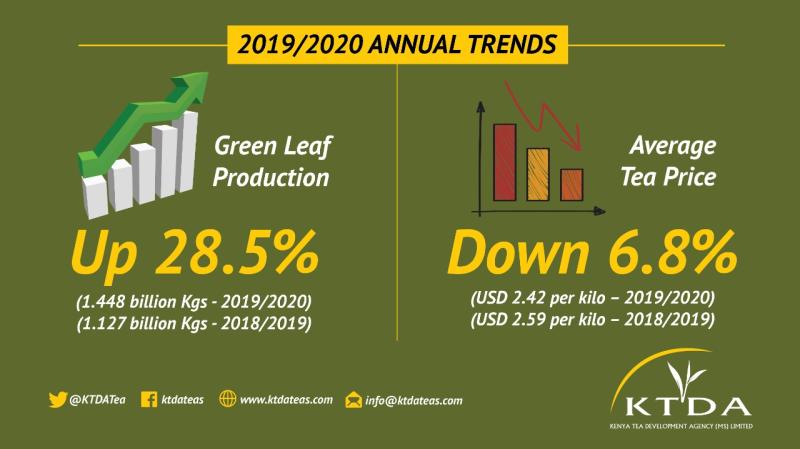 Even the tea bonus nosedived to 30 per cent. Farmers who have been supplying tea to KTDA-owned factories in the region said the Sh10 bonus per kilo has reduced to Sh4 a kilo.

“We have children at home and we have to purchase food and other basic effects to sustain them. And remember from the recent information on the flattening of the Covid-19 curve, schools will resume and school fees will be needed,” said Simon Kiptoo, a Nandi Hills Sub-county farmer.

Area farmers called on the government to intervene and iron out the problems ailing the tea sector.

They also called for implementation of new tea rules to rid the sector of rogue traders.

“As farmers, we have been taken for granted for a long time and the KTDA discrepancies over the tea market have forced factories to buy our leaves at poor prices. With the proposals given in the reforms on consolidating marketing and management of the tea sector, we hope it will safeguard the interests of the farmers,” said John Sirma, a farmer in Aldai Sub-county.

He added that the woes bedevilling the tea sector have rendered the tea crop unprofitable, leaving farmers at the mercy of private factories.

“It has been chaotic for farmers to come to terms with the prices. This is why we have experienced agitation for price increments for tea leaves,” he said, projecting that in the next two months they expect the global market to normalise.

“Over 90 per cent of our tea is sold in the international market and since coronavirus hit, we experienced the reduction and low demand for the tea globally.”

His KTDA counterpart Joseph Mwendwa said going by the current state of a reduction in Covid-19 cases in the country, and in major tea markets in Europe and Asia, there will be significant tea exports when the markets are open.

“We shall see remarkable differences before the end of this year and the sector will come back to its feet. Farmers will need to bear with the prevailing situation,” he said.