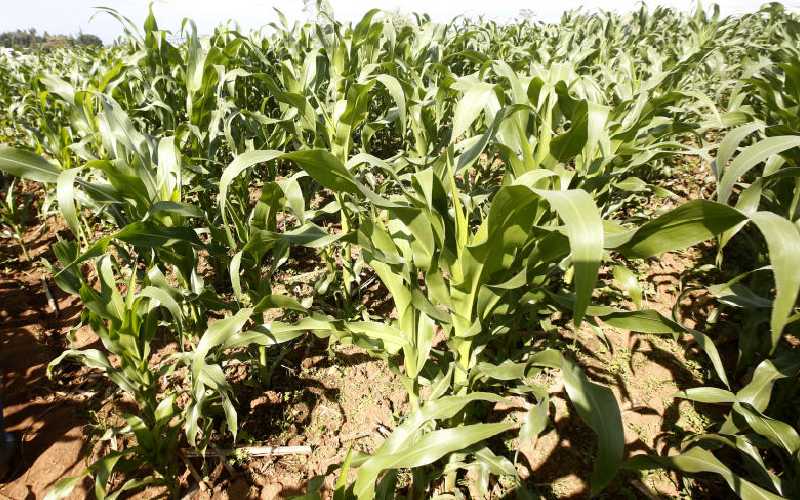 Kenya Seed Company (KSC) researchers through partnerships have developed a superior maize variety that can withstand the disease.

Christened H 6506, the seed is drought resistant, tolerant to MLND, matures early after between 150-175 days, and grows in altitudes of between 1700-1200 metres above sea level.

“Through the International Maize and Wheat Improvement Centre (CIMMYT), we took a maize variety and developed a hybrid which has now proved to be MLND tolerant after being subjected to the disease. This variety is now hope to our farmers,” explained Mwarey.

He stated that the variety also performs well in different ecological zones where it has already been tested and has a ‘stay green’ characteristic suitable for making silage for livestock.

“The H 6506 variety has proven to be stable across seasons and across agro-ecological zones and is expected to result in improved yields to farmers and ultimately upscale productivity levels, livelihoods and food security. The variety yields up to 35 bags per acre,” said the agronomist.

Mwarey said being a medium altitude variety, H 6506 is suitable for the warm highlands of Nakuru, Nandi, Laikipia, Naivasha, Narok, Kisii, Bomet and Bungoma. KSC has already tested adaptability of the seed in the regions.

“It can also perform very well as a transitional alternative in the highlands. Its stay-green attribute makes it very ideal for forage and silage making,” he stated.

Your cows and chicks are freezing keep them warm
Farm Kenya resident veterinarian Dr Paul Kang’ethe says the cold weather is a huge challenge to animals especially the young ones.
Livestock
By Rosa Agutu
1 day ago
.

Premium
Your cows and chicks are freezing keep them warm
Livestock
By Rosa Agutu
1 day ago
Farmers' lobby proposes measures to fix animal feed crisis
Livestock
By Peter Theuri
2 days ago
Why your dog is barking and how to stop it
Livestock
By Dr Paul Kang’ethe
2 days ago
Premium
Mastitis: How to prevent Disease that cuts milk production
Livestock
By Dr Joseph Othieno
2 days ago
My friends persuaded me to start rabbit meat restaurant
Market
By Silas Nyamweya
3 days ago
.

Premium
By Jennifer Anyango 3 days ago
Want to grow avocado? Here is what you need to know