Garlic has crushed poverty out of my life 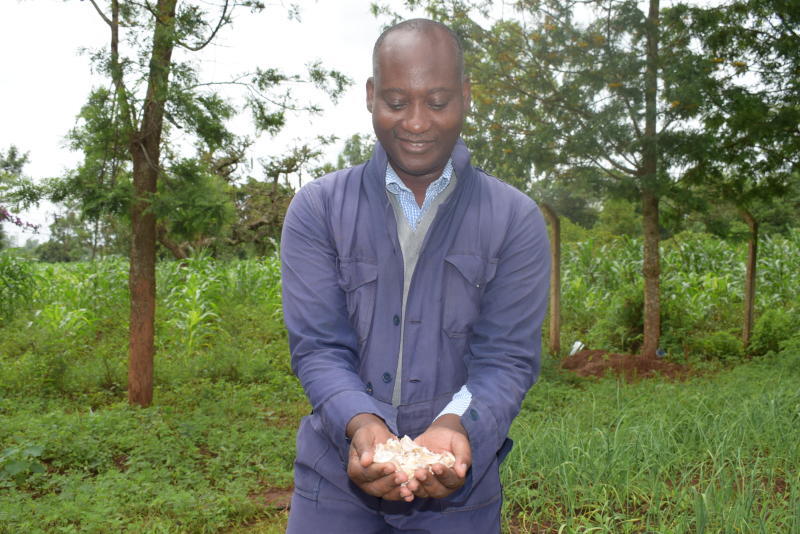 He discovered that though growing garlic, is an arduous task, but the returns are worth every drop of sweat.

“A piece of garlic costs Sh20 and the production cost is less than that. Demand is also there and that is why Kenya is importing a lot of the produce from China,” Burke says.

He also discovered that garlic produced in Kenya is of better quality unlike garlic from other regions, which has lost its pungency, because of the length time it is in high seas.

“I can confidently say Kenyan garlic is more superior to China’s which is very fresh. With garlic, I have managed to crush poverty out of my life,” he says.

With that background knowledge, together with his wife Mercy, they embarked on garlic growing on large scale.

Burke has three acres under garlic at Ruiri in Buuri, Meru County and a ready market.

When they started their target was to produce 4,000 kilos of garlic per acre. To achieve that target, they had to do everything right, from preparation of the land, to spraying and harvesting.

After making inquiries, they settled on traditional variety known as ‘Moyale’ as opposed to the ‘Nyeri’ variety from China.

“The Moyale variety is more potent, more pungent. But we had to plant both varieties to test their performance under similar conditions. We settled on Moyale, which is preferred in top hotels,” Burke says.

In the first harvest they made Sh90,000 profit from an acre, which was ‘not bad at all’.

“To thrive, garlic needs to be treated well. For us, we covered the entire land with garlic to prevent growth of weeds. To minimise evaporation, we covered the land with polythene paper. Every so often, we keenly assessed each bed to ensure no single weed was growing, because weed is the biggest threat,” he says. Having walked the journey, they have plenty of lessons for upcoming farmers.

The spacing between one clove to the other is three centimetres, and rows a foot apart, which makes it possible to grow thousands of them in a parcel of land.

The crops are watered using drip irrigation which ensures each plant gets enough water. Water should not be allowed to collect around the plants as this can lead to rotting.

Though the garlic does not need a lot of water to grow successfully, Burke has installed a massive water tank in the farm to ensure constant water supply.

Chemical free garlic is preferred in the market and owing to that, the farmer avoids spraying the crop with chemicals. Instead, he uses pig manure and urine from the rabbits at the farm.

The farmer keeps 70 Canadian rabbits for the sole purpose of collecting the urine which is great for dealing with weeds.

“We mix the urine with water and spray on the garlic. We can use it as organic fertiliser, before the garlic bulbs,” he says.

They decided to do away with pesticides after testing a patch and discovered that pesticides hinder growth of the garlic.

A total of 10 casuals tend the crop weekly, to ensure they are growing under the right conditions.

With garlic having a longer shelf life after harvest, Burke is able to reduce post harvest losses, which is a big problem for farmers of perishable produce. Garlic can remain fresh for as long as one year as long as it is stored under the right conditions.

It is best stored in a cool dry place. He advises interested farmers not to inter-crop, even with onions, to prevent ‘competition’ for nutrients.

According to agronomist George Mbakaya, garlic is a high-value crop closely related to onions. The beauty of garlic is that it has very few problems with pests in the garden. It is a natural pest repellent. But one of the diseases to look out for is white Rot which also affects onions.

White Rot is a fungus that may attack garlic in cool weather. Not much can be done to control or prevent that problem except rotating your crops and cleaning up the area after harvesting, says the agronomist.

Two doctors in Diaspora use technology to run village farm

By Jennifer Anyango and Kelvin Nyakundi | 4 days ago