News
By Kamundia Muriithi | 2 years ago

Massive rice imports mainly from Pakistan have chocked the economy of Ngurubani town in Mwea, Kirinyaga County, which is the biggest grower and supplier of rice in Kenya, slowing development and pushing farmers to diversify into other crops.

While this reality has existed for many years, and traders in the town have adjusted to it, what has changed is that the importers are increasingly bringing in very low-quality rice, blamed on smuggling through the Somali-Kenya border and weaker surveillance at the Port of Mombasa. The cheaper rice is then sold at rock-bottom prices and then blended with Mwea’s aromatic pishori rice to be sold at pishori variety, at a cheaper price, knocking off the demand of the original variety that Mwea is known for.

The imported rice varieties sell at as low as Sh80 per kilogram whereas pure Mwea pishori rice, which has a distinctive aroma, retails at Sh130. In a bigger blow to the area’s economy, as the construction of Thiba Dam, which was supposed to flow in more money because of the doubling of rice farming has stalled indefinitely.

A visit to the bustling town revealed that milling factories are operating at half capacity because of the diminishing demand, slowing down the rice chain that has starved the town of cash flow.

The cheap imported varieties pose stiff competition, and for customers seeking to save a shilling in the hard economic times, many opt for the cheaper rice.

But their biggest hurdle is unscrupulous traders who use devious means to pass off the imported varieties as pure pishori.

Many customers are not wiser and cannot differentiate between pure pishori and a blend of cheap rice and the pishori.

Strangely, traders raise concern that “pishori” sells at about Sh120 in some dealers in Nairobi and Mombasa whereas ordinarily, it would be higher than Mwea’s due to transportation cost. They say such rice could be adulterated or perfumed blends that are killing their businesses.

Traders and millers said they were disturbed by reports that some dishonest merchants had gone to the extent of spraying the cheaper imports with perfumes to cheat buyers that it is pure pishori.

At top rice mills and rice shops in Mwea town, business is not roaring like before a situation the dealers linked to business disruption by cheap imports.

“Our sales have been on a decline compared to previous years. When I started trading rice here seven years ago, the business was booming, but nowadays has slumped down as customers opt for a cheaper varieties sold elsewhere.

“Other consumers unknowingly buy cheaper rice blended with pishori out there unknowingly believing that it is pure pishori. Those of us who deal with genuine pishori are suffering,” said Jane Njagi, a trader at Nice Rice Millers.

When Mt. Kenya Star visited some of the rice mills in Mwea on Thursday, we found the traders, mostly women, idle looking forward to the tiny trickle for customers. 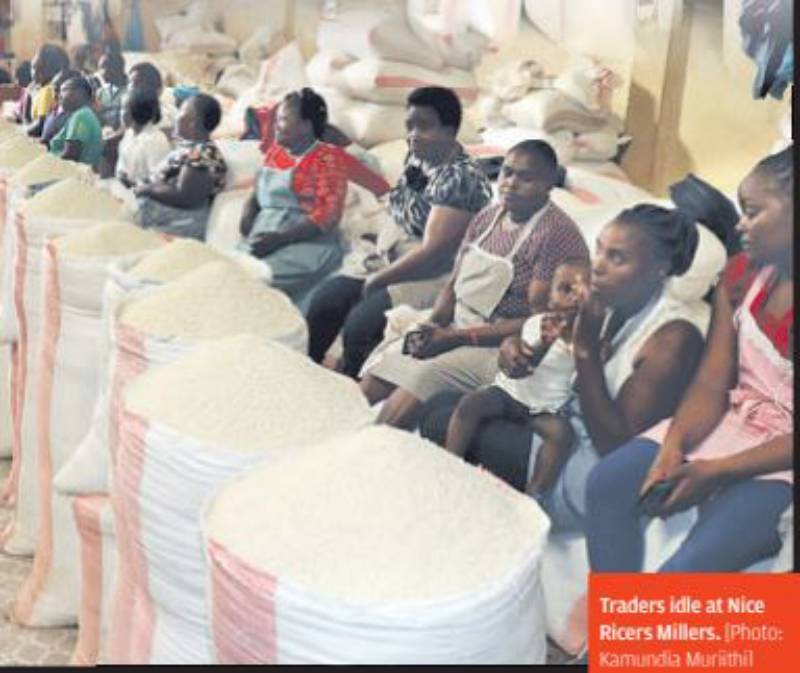 As a customer walked in, the traders scrambled for his attention promising that their rice is pure and grade one.

The customer who we later identified as Michael Kanuthu, a petrol truck driver heading back to Nairobi from taking delivery to Meru told us he had made it a habit of stopping at Nice Rice Millers where he is certain of buying pure pishori.

“Every time I pass through this route I buy enough rice to last my family for weeks. I’m reluctant to buy the commodity elsewhere as I can’t tell whether it is blended with other varieties,” he says.

Traders say if they could get as many customers as Kanuthu who appreciate the pure pishori, their fortunes would change for the better. But that is just a wish since customers have cheaper alternatives.

Peris Wawira, a rice farmer and trader at Mwea, wondered why rice that is imported all the way from Pakistan would sell cheaper than locally produced ones.

“That tells you the farm inputs, that is fertilizer, chemical sprays and labour here is high and adds up to the cost of production. This makes our produce expense and unable to compete with imported varieties,” says Wawira.

She says the best measure the government can adopt to address this is by subsidizing farm inputs and providing more water to reduce costs associated with hiring people to channel water to paddies.

“Mwea has the capacity to multiply rice production several times and feed the nation only if adequate water is provided, inputs subsidized and the government helps us to find more market,” says Wawira.

Stakeholders say many factors like insufficient water supply and the high cost of production are contributing to lower rice production whereas the Mwea irrigation scheme has the potential to produce more.

At Top Graders Rice Millers, the director Loise Njoki said whereas they have a milling capacity of 1000 bags of rice daily, they were doing only 200.

Njoki said the miller which has been operating since 2015 providing employment to over 100 traders and farmers deal only in pure pishori. She said cheap imports were posing unfair competition.

“Truck drivers have been buying our rice in large quantities but they now prefer cheaper rice. We are left with consumers who buy smaller quantities,” she said.

Njoki called on the government to complete the construction of the Thiba dam so that more acreage can be put under rice production, while also intervening to lower production costs.

“Cheaper inputs such as fertilizer and controlling of the destructive quelea birds, which force us to hire even 10 people to fight them can lower production expenses and make our rice competitive,” says Njoki who is also a rice farmer.

At Nice Rice Millers, Head of Operations Peninah Kamunde said they mill 60 tonnes of rice every day but that is still below their capacity.

She said their pure pishori rice whereas loved by customers is under threat from cheaper imports.

She said the adulteration of pure Mwea pishori alters the market and shatters the loyalty of consumer who finds the fake pishori unpalatable.

“We go the extra mile to ensure only pure pishori comes from our mills and is traded here. It is now upon the relevant government agencies to shield farmers from other faked rice out there,” said Kamunde.

She said apart from weeding out fake rice, the provision of adequate water by completing Thiba Dam, lowering the cost of inputs would enable farmers to access cheaper fertilizer and sprays to control rice blast.

In an interview in May this year, Tai Rice Millers proprietor Edwin Kagombe expressed concern over competition from the cheap imports.

He said the cheap Pakistan grain is dumped into a big store in Mwea always after every harvesting season and the is blended with the Mwea pishori rice and offered to unsuspecting consumers at a much cheaper cost.

He said the adulterated rice was affecting business and called for the protection of farmers against unfair trade practices.

Peter Njagi, a farmer, said rice farming is tedious and that the government should protect farmers.

By Dr Paul Kang’ethe | 3 weeks ago