Picturesque! This is what best describes Mr Daniel Thairu’s farm along Kenyatta Road a few kilometres off the Thika Super Highway.

On a quarter-acre piece of land, Thairu has installed multi-storey gardens with stakes on which he grows strawberries, spinach, carrots and onions among other crops.

Armed with passion and faith in his green thumb, he embarked on a journey that birthed an idea that has now made him a household name. In 2013, the agropreneur started Farming Wonder after a few attempts on other types of innovations.

“I have always had a deep interest in agriculture since I was in primary school. Despite my passion for farming, I did not like the farming methods applied especially at home where we don’t own big pieces of land. The techniques I was used to and what I got my parents using were tiresome and labour intensive. After I left formal employment a while back, I decided to experiment and that’s how the idea to create these gardens came about,” he says.

Each garden, he says, occupies approximately four feet and can hold up to 130 plants whereas if he is growing the crops the conventional way, similar space can only take up to 16 plants.

Thairu says the least each garden can yield is one kilogramme of strawberries per week and picking is done twice weekly.

“The demand for strawberries surpasses the supply and this is one of the reasons I ventured into growing them. Initially, I used to grow spinach which does really well in these types of gradens. One of my best experiences with growing strawberries is that I don’t struggle finding market. We sell them on the farm as most buyers are suppliers in supermarkets in Nairobi,” he adds.

Strawberries, Thairu says, are easy to maintain and high-yielding and aren’t labour intensive and one crop can go for up to four years. So far, Thairu has sold more than 800 gardens to farmers from as far as Kisumu and Eldoret and depending on the size, a garden ranges between Sh2,500 to Sh3,500.

“The reception has been amazing. We are usually used to seeing one farmer get one garden and later coming back for others. Most of our clients are referrals from customers. We also offer training to those interested which is an added advantage to those interested in this form of farming,” says Thairu. 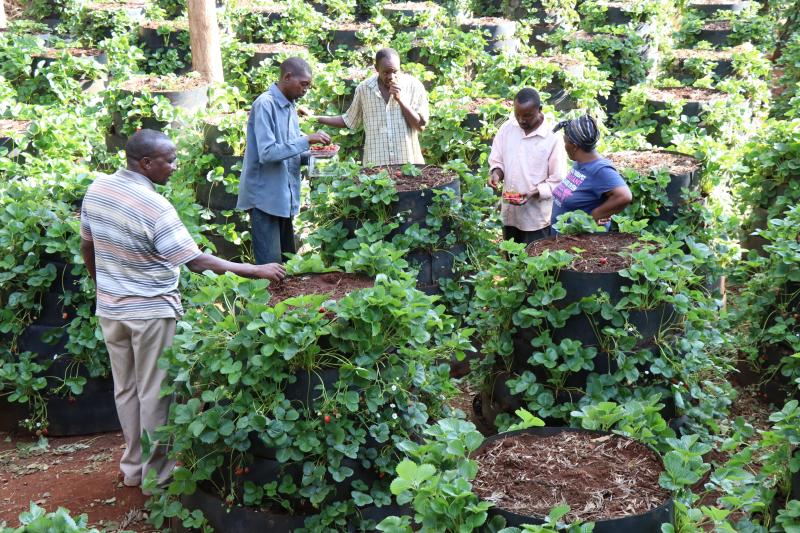 According to Thairu, one of the advantages of using multi-storey gardens is that plants use less water than the convectional way of farming. 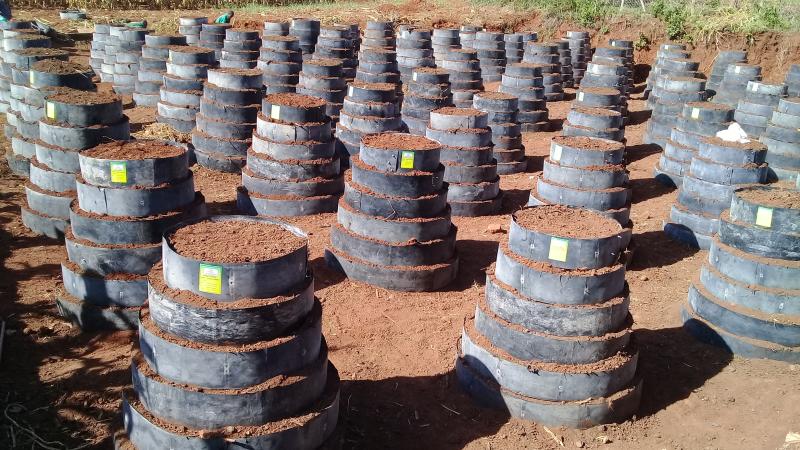 The storey gardens are constructed using dam liner materials with a thickness of 0.5-1mm which are cut into different sizes and fastened using bolts and nuts at the ends to form circular rings with a diameter of 4ft.

These rings reduce in size by two inches upwards to make layers of stakes with a wider base and a narrow top forming a pyramid-shaped structure with terraces.

The storey garden has six layers, each with terraces filled with soil while the top ring holds the topsoil. The soil used should be mixed with the less acidic fine goats’ manure on a 50:50 ratio.

Gitau says the storey gardens conserve irrigation water as the staking help minimize evaporation and a farmer can only water crops for up to thrice a week.

“One such garden can take a maximum of 20 litres of water once or twice a week depending on the weather,” he says.

They are also not labour intensive as no major weed control is required and they are applicable both in rural and urban settings.

Why your dog is barking and how to stop it
Dogs communicate through barking, howling, whining and more. However, excessive barking is considered a behaviour problem.
Livestock
By Dr Paul Kang’ethe
9 hours ago
.

Farmers' lobby proposes measures to fix animal feed crisis
Livestock
By Peter Theuri
8 hours ago
Why your dog is barking and how to stop it
Livestock
By Dr Paul Kang’ethe
9 hours ago
Premium
Mastitis: How to prevent Disease that cuts milk production
Livestock
By Dr Joseph Othieno
9 hours ago
My friends persuaded me to start rabbit meat restaurant
Market
By Silas Nyamweya
1 day ago
How to grow 'minji' the amazing green peas
Crop
By Kelvin Ogega
1 day ago
.

Premium
By Jennifer Anyango 1 day ago
Want to grow avocado? Here is what you need to know