Use of ducks to control pests 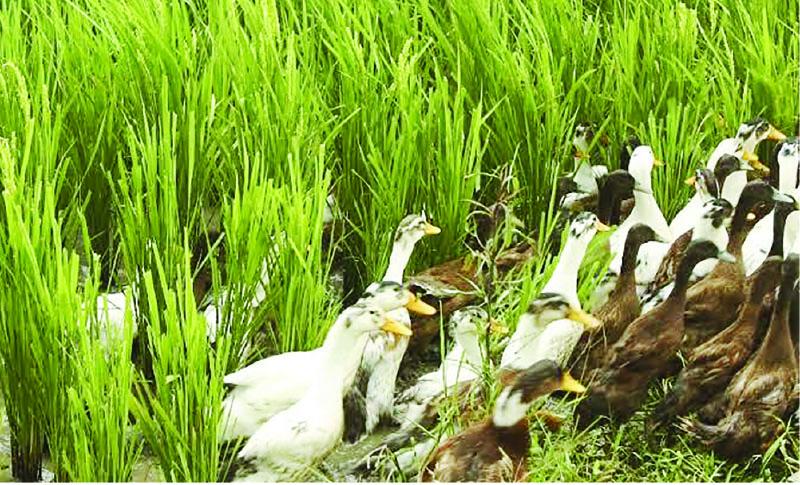 Two weeks ago, I highlighted the effects of 16 per cent VAT on farmers and how they can cope with effects of increased cost of chemical pesticides. One such coping mechanism was the adoption of Integrated Pest Management (IPM). One rice farmer with a burning desire to produce high quality rice with minimal chemicals wanted to know how practical it is to apply the IPM in rice fields. Today, I will explain how the leading rice producers are using IPM otherwise known as Bottom of Form.

This system is not new. Growing ducks and rice together in irrigated paddy fields has been practised in China for years.

The Chinese farmers practised it until they were enticed to pick up quick-fix solutions like use of synthetic nitrogen fertiliser and chemical pesticides. But now, they have realised the environmental and health hazards of these chemicals and reverted to basics — use of ducks.

The method has proven effective and has positive effect on rice growth; insect, disease and weed control; and paddy biodiversity and the surrounding environment. The method has also been successful in Japan, Bangladesh, Philippines, and Vietnam the largest rice producing countries.

In this type of farming, ducks are released in the rice field 10 to 20 days after transplanting, until the time of flowering. The system is suitable for resource-poor farmers, as it enables them to produce high quality organic rice at a low cost. The integration of ducks in rice field creates a symbiotic relationship between rice and ducks, resulting in numerous benefits.

First, the ducks eat harmful insects and weeds, which significantly reduces the need for use of chemical pesticide and manual weeding of the rice field. By eating the harmful insects and weeds, duckshave a nutritious diet from the rice field. The diet make the ducks grow faster resulting in meat rich in protein. This nutritional advantage can contribute in managing the problem of food insecurity and malnutrition.

These insects have also developed resistance to chemical pesticides making it hard to control. In such cases ducks can be introduced to spot and kill the pests. But most importantly, rice-ducktechnology reduces emission of methane, the greenhouse gas responsible for global warming.

As ducks move through the fields, they plough field with their beaks, till it becomes soft and muddy. This loosens up the soil, making it more aerated, thereby increasing dissolved oxygen in the surface soil and water of paddy fields. This enhances aerobic decomposition of soil organic matter.

Methane gas on the other hand is released, when such activities take place in anaerobic condition or in absence of oxygen. So, the duck-rice farming system is an ideal in fighting climate change locally and ensuring food security.

In South Africa, the ducks are used in vine yards to eliminate snails that damage the vines. Since their introduction, the farmers have considerably reduced the use of snail bait which is a pesticide.

Farmers who have chosen this technique are motivated by the lucrative gross-margins.

This is because the produced rice can be sold at higher prices to consumers who are increasing becoming environmentally conscious and concerned about the harmful effects of chemical pesticides. Studies shows that, rice-duck farming system can increase the rice productivity by 20 per cent and net profit by up to 50 per cent. Duck rice is considered a premium rice product and often sells at 20 to 30 per cent higher than conventionally grown rice.

The only disadvantage of applying this farming system is that the ducks need to be slaughtered for meat. They get too fat faster and could harm the plants; therefore a farmer must change ducksevery rice season.

[The writer is an expert on agricultural solutions and sustainable agriculture]