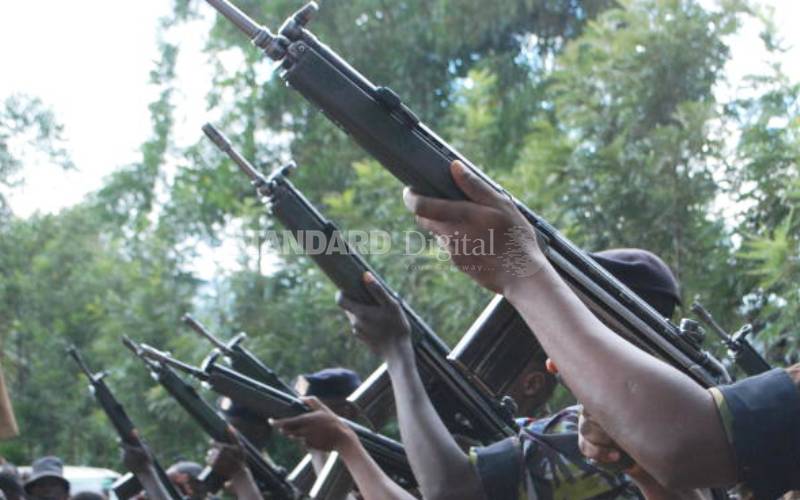 Former President Daniel Moi will be accorded a 19-gun salute in a series of elaborate military ceremonies leading to his burial on Wednesday.

A 19-gun salute is done in honour of dignitaries such as vice presidents, Senate and National Assembly speakers, chief justices, state governors, chiefs of staff and five-star generals in the US.

Even though real guns are involved, a military funeral and other honour guards do not fire live artillery shells but blanks.

A source familiar with the details but who would rather remain anonymous, says the interval between the booms is to allow for reloading.

He adds that blanks are used as safety precaution.

The All About the Firing Party site states that the firing party is 50-75 paces from the head of the casket in full view of the family.

In the event of an indoor memorial service, the firing party would be directly outside but be positioned close enough for the family to see.

"For funerals of presidents, a 21-gun salute using artillery and battery pieces is fired (not to be confused with a three-volley salute), while all other high state officials receive 19-gun salutes and 17-, etc.  On occasion police use their service weapon, or shotguns."

The seven members of the legion are picked from a different branch of the military, dressed in their uniform, each firing three rounds.

It was 7 members of the legion. Each from a different branch of the military, in their dress uniforms firing three rounds

Read More: Here's Why The Military Does A 21 Gun Salute | https://wyrk.com/heres-why-the-military-does-a-21-gun-salute/?utm_source=tsmclip&utm_medium=referral

According to the US Army Centre of Military History, the gun salute system can be traced back to naval traditions where rounds were fired from cannons.

The number of rounds has changed over the years, with only odd number salutes remaining.

There are 13, 15 and 21 gun salutes which are all determined by the rank or social standing of the person being honoured.

In British tradition, other than the 21-gun salute, there is the 31 special salute meant for the queen-empress and members of the Royal Family.

In the colonial era, the 31-gun salute was also meant for the Viceroy and Governor-General of India, and 101 for The King-Emperor of India.

A 21-gun salute is reserved for the highest offices, like the President or President-elect in the US. The number of rounds fired then decreases for officers in different ranks.

Military honours are essentially meant to highlight the respect held for the fallen leader.

In the case of naval fleets, the officers would discharge seven rounds in remembrance. However, their on-land counterparts shot three times to make the total 21.

The gun salute might have originated in the 17th Century with the maritime practice of demanding that a defeated enemy expend its ammunition and render itself helpless until reloaded, reports the Irish Defence Forces.

Moi’s funeral will be the second one to have full military honours in Kenya.

The only other person to have been treated with similar honours was President Jomo Kenyatta when he died in office in 1978.

Since Moi did not die in office like Kenyatta, he will get a 19-gun salute.

If Mzee Moi were to be buried in military uniform for his role as Commander-in-Chief during his 24-year rule, he would have had the 21-gun salute.

The casket will be draped in the national flag on a stately carriage to be pulled by the military platoon. Pallbearers will be 36 soldiers in the ceremonial uniform of the rank of Major and above.

Why Ruto must be afraid of the Moi-Kenyatta clan meetings