Whereas there is uncertainty over what exactly Putin is thinking and what his endgame is, Ukraine remains outgunned in this unprovoked war.

Face-to-Face peace talks between Ukraine and Russia are due to start in Turkey on Tuesday after negotiators arrived in Istanbul for the first such negotiations in more than two weeks.

But back in the second largest country in Europe, Ukrainian forces have retaken key areas to the north-west of Kyiv, as Russia’s advances around Chernihiv, Sumy or Kharkiv stall.

Europe’s largest country has diplomatic presence in most countries, and their ambassadors have defended Putin’s actions against the neighbour, Ukraine.

Ambassador of the Russian Federation to Kenya Dmitry Maksimychev now says that the situation in Ukraine is not an invasion. Speaking on Capital FM’s morning show on Monday, March 28, Dmitry was categorical.

“It is not an invasion. Because it is a limited special military operation. There is a very limited contingent of Russian troops. They are independent, we are not exploiting them,” he said.

As the invasion enters Day 34, Dmitry holds a different opinion.

“The reasons have been explained clearly by President Putin. It is demilitarisation of Ukraine, de-nazification, protection of the people of Lugansk and Donetsk region from genocide and extermination. It is also addressing security concerns of Russia itself, there are legitimate security concerns because of NATO exploiting the territory of Ukraine over the last few years and there has been an escalation of this activity.”

Kenya’s Permanent Representative to the UN Martin Kimani, while chairing the UN Security Council meeting remarked: “We believe that all States formed from empires that have collapsed or retreated have many peoples in them yearning for integration with peoples in neighboring States. This is normal and understandable. After all, who does not want to be joined to their brethren, and to make common purpose with them? However, Kenya rejects such a yearning from being pursued by force. We must complete our recovery from the embers of dead empires in a way that does not plunge us back into new forms of domination and oppression.”

“This is our understanding. I would probably disagree with Ambassador Kimani, respectfully. I don’t think that the colonial narrative is really relevant to the issue that was being discussed, that is the crisis in Ukraine. Because we never colonised anyone. Russia was an empire for many years, however it was not a colonial empire.”

When asked whether Ukraine is really a threat on a military perspective, he said: “It is a big country that can be compared to Kenya or Poland, and their armed forces are second in Europe after us (Russia). They are about 300,000 to 400,000 people, who are uniformed personnel. And over the last few years, they have been stuffed with the most sophisticated western weapons, and it is a little bit disturbing. There was a clear intention by the (North Atlantic Treaty Organization (NATO) to actually deploy more military facilities to the territory of Ukraine, which already constituted a threat to us.”

“We’ve had enough trouble discussing with NATO the issue of their expansion eastward closer to our borders, and Ukraine is exactly on our border. And if NATO, with its weapons expands to us, it does create a serious threat. Because a missile launched from, for example Kharkov, can reach Moscow within minutes.”

Since Russia began its aggressive actions against Ukraine, Russian officials have accused NATO of a series of threats and hostile actions.

The question therefore begs, Is NATO setting up in Russia’s opinion to keep Russia in check? Dmitry is concerned.

“It is not clear because we have been talking to them since the early 1990s. When the Soviet Union broke up and the constituent republics of the Soviet Union became independent, it was a consensus decision for everyone. Russia agreed with that. Even before that, Russia agreed to reunification of Germany (Federal Republic of Germany and the German Democratic Republic).

“We withdrew from Germany and we also withdrew our troops from Czechoslovakia, Poland and Hungary. It was done in good will because we intended to build a new Europe without the walls, without divisions. And we were given assurances that NATO would not move its military infrastructure to our borders because everybody was too happy to have our troops go back home.”

As the invasion continues, Ukraine prosecutor general’s office has said that a total of 144 children have so far been killed and more than 220 injured. However, Kremlin spokesperson, Dmitry Peskov says Russia felt it was “amongst war” with the west after an array of sanctions were imposed on Russian businesses and individuals.

At the start of the invasion, Russia’s President Vladimir Putin warned the international community of “consequences greater than any you have faced in history” over any attempted interference. 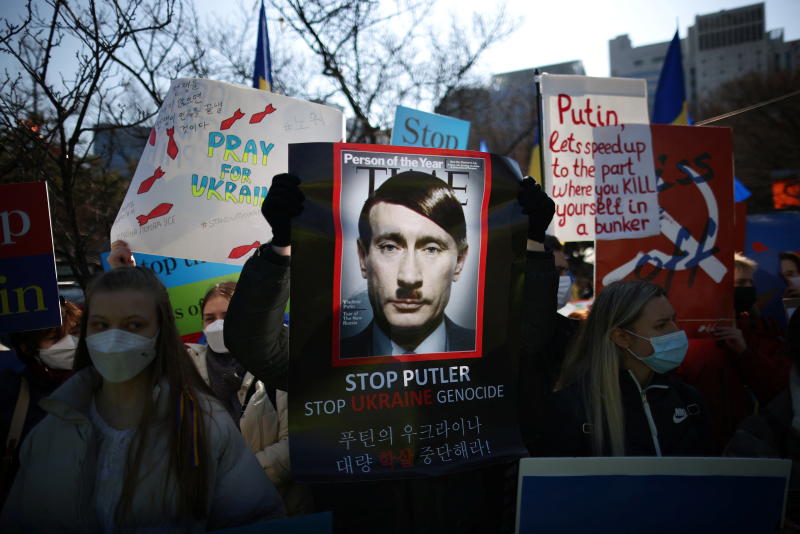 Little Ukraine lonely in proxy war between big powers of US, Russia
The happenings in Ukraine, in which Russian has taken over the country, isnt about Ukraine, it is about global power dynamics involving US and Russia
Europe
By Macharia Munene
7 months ago
.

EACC moves to court to recover Sh21m embezzled by private firm and state corporation
National
By George Maringa
34 mins ago
Premium Inside Mzee Jackson Kibor's will
Explainers
By Standard Checkpoint
1 hr ago
Premium When 'Jah' reference was declared devil worship in schools
National
By Nzau Musau
2 hrs ago
Standard Group, matatu owners in deal to give passengers access to newspapers
Business
By Esther Dianah
2 hrs ago
.