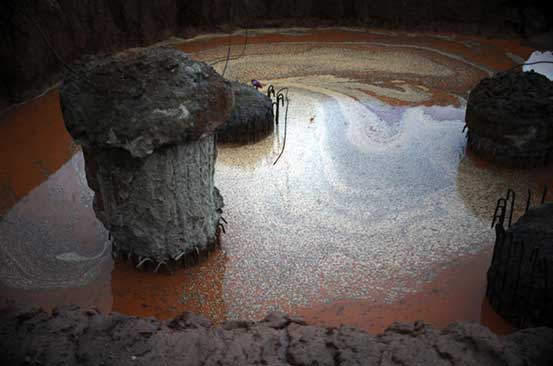 MAKUENI: His eyes sunken with crust all round and occasionally coughing, Mzee Ngie Nguko sits pensively under a tree staring at the river near his home.

Another elderly man, Musinga Mukusya, fidgets with his walking stick. He has come to visit Mzee Ngie who fell sick due to alleged effects of oil spill less than 100 metres from his home in Thange, Kibwezi East.

Ngie, 94, had been in good health until a few months ago when he started coughing and experiencing congestion in the chest and frequent headaches. He blames ill health on the oil spill that was detected on June 15 near his home.

“If there’s a person who has felt the brunt of this sickness, it is me,” he laments.

Before he could finish the statement, his son Mutisya Ngie walks in and interrupts the old man and says “me too.”   He has developed a cough and experiences  abdominal pains and chest congestion.

Mutisya’s mother Rael Ngie and his wife are also coughing while his baby, Mutunga, has red eyes and a runny nose.

“We are all affected one way or the other, including our livestock. I have lost three goats in the last one month. They just died... our mango trees are drying. I have never seen anything like this,” Ngie says.

The smell of petroleum  fills the air. Kenya Pipeline Company (KPC) has dug narrow pits near the river to drain the spillage.

Ngie requests for his medicine—painkillers—given the previous day at the Thange shopping centre at a free “Beyond Zero” mobile clinic sponsored by the Makueni County government as part of mitigating the effects of the oil spill.

Next to the old man’s homestead is Musyoki Muindi’s parcel of land where the oil leakage from the KPC pipeline underneath was reported. With vegetation uprooted, the place looks like a construction site. Pipes, ladders and oil drums litter the place.

A lone mobile toilet for the KPC workers who manned the site for three months stands by the side, near a drying mango tree.

“Just look at how they messed up this place and disorganised my stuff. All my sisal is gone. It’s dumped on the corner. Over there are the logs cut from my felled mango trees. This was the ‘headquarter’ of the spillage,” Musyoki says.

His family relied on crops from land near the river but they were  all destroyed when KPC staff dug up the area.

But the effects of the spillage are best captured on the parcel of land leased to Mutuku Mulwa to plant vegetables. The land borders the Standard Gauge Railway construction strip in between Musyoki’s parcel of land.

His tomatoes are drying up from effects of the oil leakage. The maize and mango trees are however not affected. While the kale and onions are struggling to grow.

“All these have been condemned by agricultural officers who visited the site. The soil has been oozing oil. All wells around here are laden with oil. Our sweat, our pain, our efforts all gone in a flash. I cannot mention the long term health effects on us because I do not know,” he says.

On a section of the land is a well which has been contaminated by oil. For the last three months, KPC trucks have been carting oil from the well and taking it to their treatment centre in Nairobi for purification. Despite these efforts oil has continued to ooze from the well which is about 200 metres from the pipe that had leaked.

When we visited the site on Thursday, we found the surface of the well covered in a dark-red petroleum product. The well has been sealed with two metallic covers.

“We have been taking it to our Nairobi treatment centre where it is purified and returned to our system as long as it meets international quality standards,” KPC’s Corporate Communication manager Jason Nyantino said.

Locals believe the oil must have been leaking for some time before it drifted to well. Most the vegetables and fruits around the site of the spillage have been condemned.

“The mangoes on the trees are tempting but we are not supposed to eat them,” Peter Kyule, a worker at the nearby Thange Primary School, says.

Sharon Kimuli, in her 20s, told us she could not stop the children from eating the tomatoes.

Kimuli says residents who have used water from the river have developed itchy skin, abdominal pain and dizziness. Some have had the skin peel and nails come out.

Further downstream, 600 metres from the spillage site, a common well shared between Thange Primary School and St Peters Thange was contaminated with oil and subsequently closed.

School Principal Stephen Anguzu confirmed to The Standard on Sunday that his deputy Simon Warui who lives next to the well had been diagnosed with lead-poisoning and put on medication.

“We no longer use water from the well for cooking and drinking and KPC has been delivering 10,000 litres of water twice a week. But some primary school pupils continue to drink the water. We are still eating the kale because we do not have a choice, really,” he said.

The uncertainty of the future for the community is best captured by Anguzu who is due to retire in the next few weeks. “I think we may be taking this thing lightly and we may pay the price dearly. It may have very serious long term effects if immediate measures are not taken to mitigate the situation.”