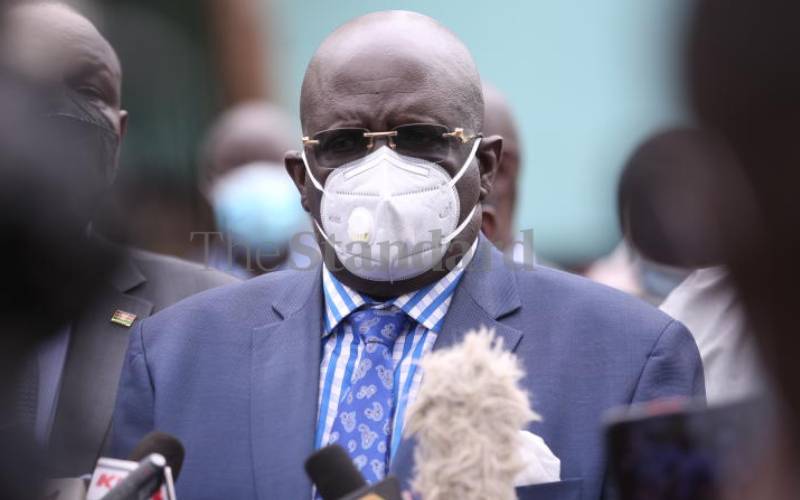 Magoha said 99 per cent of boarding schools are well run and there haven’t been cases of unrest in a majority of them. He noted that it won’t therefore make sense to abolish them due to trouble in a few schools.

Speaking at Mahiga Girls today during a groundbreaking ceremony for CBC classrooms, Magoha said the Ministry of Education will deal firmly with cases of unrest in schools.

“Why would one want to dismantle boarding schools just because of a few schools where children who have defeated their parents at home and brought their rowdy attitude to school? We should deal with them firmly,” said the CS.

He stressed that “criminal children in a few schools’ should not be the ones to determine how the country runs its education system.

Education stakeholders such as Kenya Primary Schools Head teachers Association (Kepsha) and Kenya Union of Post Primary Education Teachers (Kuppet) have been urging the ministry to scrap boarding schools as part of measures to curb unrest in schools.

The Cabinet secretary also differed with education stakeholders’ calls for corporal punishment to be reinstated in schools. He observed that some schools have no cases of indiscipline and it would be unfair to categorise them with those having indiscipline cases.

“There is a question as to those who smoke bhang and other drugs in boarding schools, approved schools will deal with them,” he noted.

On the state of security and safety in Lamu schools with regard to the upcoming national exams, Magoha said the Interior ministry has assured him that normalcy will be restored before the start of the exams.

“We are working closely with the Interior ministry and the security in Lamu is being addressed. In six weeks’ time, things will be okay. The national examinations will be very friendly because we have taken all considerations,” he announced.

On Competency-Based Curriculum (CBC) classrooms, Magoha exuded confidence that construction of the classrooms will be through by March -one month ahead of schedule. He said he was happy with the progress made in various schools.

The government has set aside Sh8 billion to construct at least 11,600 classrooms to expand learning institutions to accommodate the Competency-Based Curriculum cohort.

The project is supposed be completed by April so that learners currently in Grade Five will have a smooth transition to Junior Secondary at the beginning of January 2023.

Magoha said he will be commissioning the first classroom in Ugunja Sub-county, Siaya County.