It is now official; Kenya will soon have a new curriculum. After 30 years, the 8-4-4 system will be replaced with a new one that will focus on skills.

The new system, endorsed by government officials and key players yesterday, emphasises continuous assessment tests rather than one-off final year exams. There will be reviews at various levels of students’ academic life. During the ‘National Conference on Curriculum Reform’ in Nairobi, most participants agreed the current 8-4-4 system should be done away with even as the country aligns the education system with the development needs of the 21st century.

However, there were questions on when the new system will be rolled out. Officials from teachers’ unions said the country was not ready for the new curriculum.

But Government representatives said the new system of education would be launched in four months' time and that the only challenge was the actual time of piloting and whether there are enough funds to implement it.

Teachers’ representatives argued that the curriculum review is being done in a rush. Knut Secretary General Wilson Sossion raised questions about the process used to develop the framework of the new curriculum which he said had not yet been gazetted.

“We are yet to have the policy framework gazetted and so the question is, is this process legal?” he said.

Sossion said the remaining time is not enough to pilot the curriculum and that there is need for four to six more months to debate the quality of the new curriculum.

“We don’t even have teachers equipped with the requisite skills yet they are expected to understand the curriculum and teach it,” said Sossion.

He added: “We need to develop learning materials, the syllabus and train teachers before actual piloting of the new curriculum. Looking at the time we have, can we really do this in three months?” said Sossion.

Sossion accused the Government of rushing the process to gain political mileage ahead of the next General Election. “It is not about finishing it quickly but finishing it well. We risk ending up with a very good document that will never be implemented.”

But Education Cabinet Secretary Fred Matiang’i brushed off the criticism, saying the remaining time is enough to fine-tune the curriculum and implement it.

“We have provided resources to the curriculum reforms process, both in the current budget and next financial year. We are also welcoming support from development partners,” said Dr Matiang’i.

Some stakeholders raised queries on the actual cost of implementing the new curriculum. However, the Government said that will be known after the whole process is complete.

Matiang’i said the plan is to come up with a curriculum the Government can fund from its own budget.

“Let us reduce the negative energy in criticising things just for the sake of it. You should focus more on how you should be involved rather than how much you have not been involved,” said the CS.

Sossion said piloting should have started this month, and throughout the rest of the year, instead of May.

He said the team that developed the curriculum needs enough time to debate the system, at least four to six months, and every stage shared with the public.

“The biggest question about the curriculum is; are we ready to facilitate teachers with the 21st century classroom? The problem is if this is rushed, then we may not achieve the desired results,” said Kenya Union of Post Primary Education Teachers (Kuppet) secretary general Akello Misori.

Misori said the Government should come clean on the amount of investment it has planned for the roll-out of the curriculum, "because there is no doubt it will be an expensive affair when it comes equipping teachers with required tools and skills."

“What we do not want is a narrative from the TSC that they will re-train teachers yet we understand we already have an acute shortage of teachers. This curriculum is learner-oriented, meaning every teacher should manage a small group of students, as opposed to the current scenario,” said Misori.

Jubilee supporters have promised to turn the tide against the Opposition before the August polls. 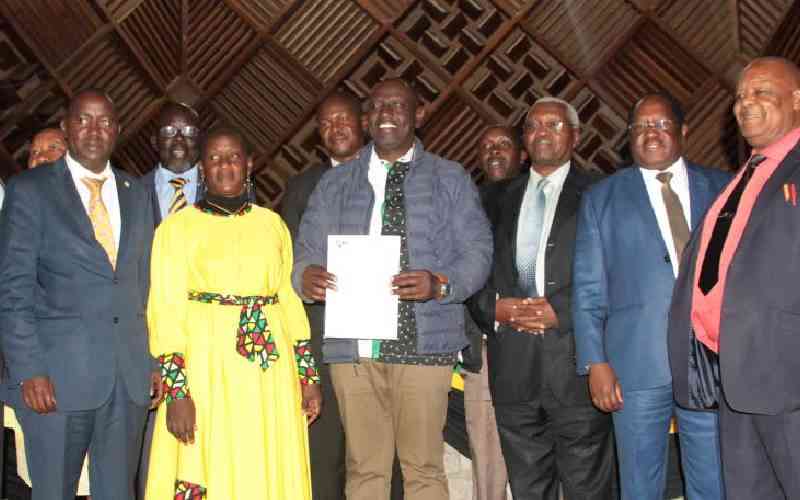