By Editorial | 4yrs ago 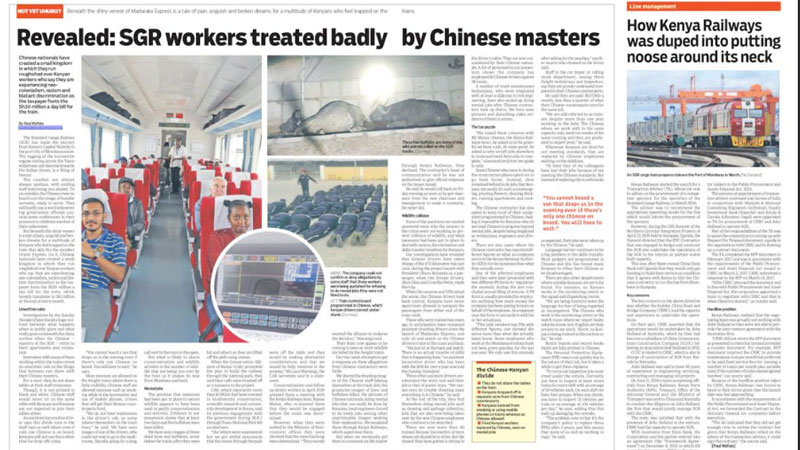 The Standard has noted with great concern the mudsling campaign in social media against this newspaper and its journalists, arising from our investigative exposé on the objectionable goings-on behind the Standard Gauge Railway (SGR) walls - a tale of discrimination, high-handedness, wildlife killings, unexplained high costs at the expense of the taxpayer and a lack of openness.

At the outset, we want to state that we take great exception to the sponsored attacks against our journalists and the integrity of this newspaper concerning the reports, and condemn in the strongest terms the crude and diversionary campaign by those who clearly have everything to hide.

The disturbing goings-on in the reports – which took months to investigate – disclosed the causes of friction between Chinese operators of the SGR and local employees as, among others, cases of racial segregation in the use of amenities, outright mistreatment of Kenyan workers and skewed payment that favours the Chinese, some of whose qualifications are questionable, and wanton killing of wildlife along the railway corridor.

We expected the Government to take decisive action and order investigations to ascertain the veracity and extent of the problem, this being Jubilee administration’s flagship project.  But what happened is the exact opposite. Apart from half-heartedly promising Kenyans that it would get to the bottom of it – ironically through the Human Resource wing of the same organization – Government Spokesman Eric Kiraithe came out to trash the serious claims and ask Kenyans to bear with the Chinese.  That was repugnant and a complete letdown.

To the likes of Mr Kiraithe, and the Government he speaks for, it was simply a case of sour grapes. His very erudite if not demeaning advice to Kenyan workers on the SGR project was that they must learn to live with their Chinese benefactors. Indeed, what Kenyans saw in this is obstruction of thorough investigations, and a defence of the railways management and the operator. That is unacceptable.

Discrimination in whatever form is outlawed by our very progressive Constitution. Visitors to Kenya are bound by our set of laws, which make it anathema for foreign nationals, or indeed anyone else, employed in the SGR establishment to mistreat their Kenyan counterparts.

Perhaps we should remind Mr Kiraithe that if what was reported happened elsewhere, the envoys of the said countries would have a lot of explaining to do. Sadly, this is not so here. We don’t think Kenyans are the children of a lesser God. They deserve better especially from those they have welcomed to stay and work in their midst. That is not negotiable.

It is important to state here that during the entire duration of our investigations, we gave the Kenya Railways, the SGR operator and indeed the relevant Government authorities ample space and time to respond to our findings, but all we got was evasiveness, obfuscation, pleas of ignorance and threats against our exposé.

Emboldened by the admonition on Kenyan workers by their own Government, the SGR operator, ostensibly in cahoots with their Kenyan friends, have embarked on a mission to tarnish the name of the Standard and its journalists – particularly Paul Wafula – through a sponsored mudslinging campaign aimed at intimidating us into silence. 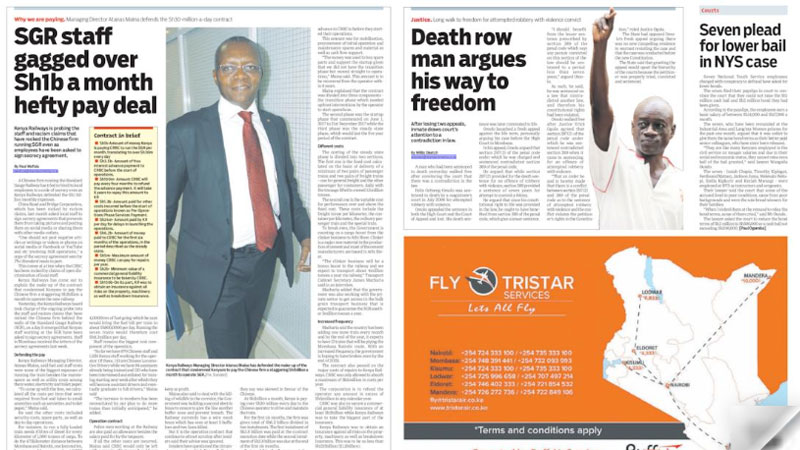 Yet if the Chinese operator felt aggrieved by the report, several avenues for redress exist. They could have given their rebuttal stating their facts, if any, or seek restitution through institutions established by law. Resorting to blackmail and intimidation will not work. It will not detract us from our core mission of informing the public. Throwing mud at and vilifying or waging a character assassination campaign against our journalists will never stop us from speaking the truth.

Indeed, anybody doubting the veracity of what we published - as is the practice anywhere within the media - has a right of reply. If dissatisfied, they can seek legal redress. That that has not happened, is the clearest indicator that what was said is not farfetched; that the SGR operator compelled Kenyan workers not to reveal anything to the press is a pointer that there is a lot being swept under the carpet.

We want to make it clear that extrajudicial tactics aimed at cowing the media from uncovering the hidden injustices in society will not work. As a show of faith and a demonstration of respect to the crucial the media plays in society, Government authorities should investigate and apprehend those waging the vicious campaign against The Standard and our journalists. After all, isn’t the media executing a mandate that is protected by the Constitution?

A free media is a key ingredient of a thriving democracy; and this important role should not be compromised. No less a person than Presidents Uhuru Kenyatta and Barack Obama have repeatedly advocated for a free press. 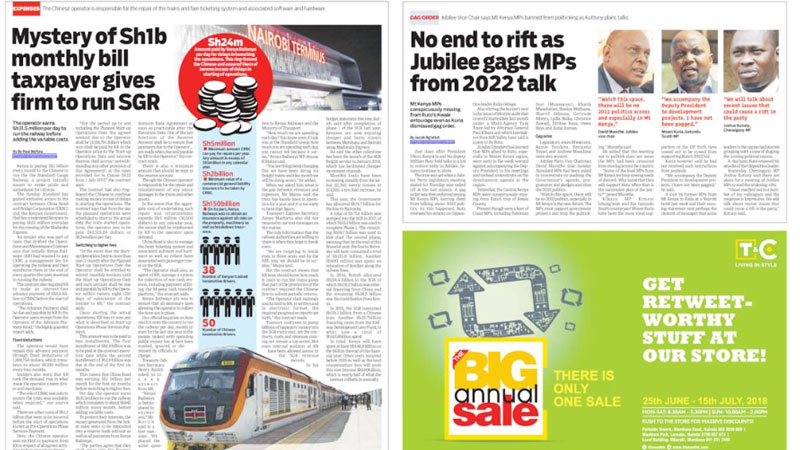 Understandably, Transport Cabinet Secretary James Macharia will in the coming days be presenting a report on the mistreatment claims to Parliament. Our sincere hope is that it will not be an attempt to white wash the whole saga.