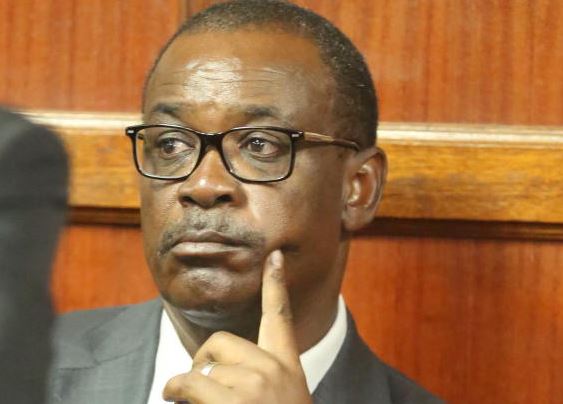 Dr Evans Kidero set aside a Sh423 million war-chest to reclaim the Nairobi governor seat and ended spending Sh418 million on campaigns and being left with Sh4 million pocket change and losing the race.

This is the political heartbreak story of former Nairobi Governor Evans Kidero (pictured), as revealed in a long-running tax dispute pitting him against the Kenya Revenue Authority (KRA).

It is also a sneak-peek into campaign spending and how much it takes for one to win, and in Kidero’s case retain, the title ‘governor’ in such a competitive city as Nairobi.

According to a breakdown of the spending offered in the court case, Kidero used Sh53 million to set up a campaign centre to run his operations. Another Sh37 million was spent on his party, the Orange Democratic Movement (ODM).

To rent an office space for his political activities for 36 months, Kidero splashed Sh7 million. Research and poll tracking cost him Sh8 million and spent Sh20 million on the day of the launch of his bid.

To monitor the election, Kidero parted with Sh25 million, fuelled his cars with Sh19 million, repaired them with a similar amount and entertained his campaigners with Sh6 million. He had an additional Sh16 million as capital expenditure.

In the court documents, Kidero attaches a list of all the people he invited to his fundraiser, presumably the same people who contributed the millions. The list includes top honchos in business and politics.

In the end, only Sh4 million remained for a man who became the city’s first governor in 2013 riding under the “Dawa ya Nairobi” catchphrase.

From this spending, Kidero would leave the comfort of City Hall to the hard benches of courtroom, hounded at every side by various government agencies.

The ex-pharmacist has cases running across all the courts; magistrates, High Court, Appeals Court and the Supreme Court. Two weeks ago, the appeals court declined to stop the Ethics and Anti-Corruption Commission (EACC) from probing Kidero’s family riches as it seeks to recover unclaimed wealth.

In the case where he broke down his campaign spending, Kidero is being pursued over alleged unpaid tax from 2011 to 2015 relating to his multi-billion estate, which include cash in bank, rentals and shares.

KRA had first calculated Kidero’s tax liability as Sh680 million. He objected to this figure, arguing that there was an addition of more than Sh253 million. He argues that some of the money taxed was from campaign donations and loans he had taken.

“I strongly believe that the investigations have been actuated by malice and undue pressure from my political opponents who are using the commissioner of investigations and enforcement to further their political interests by raising assessments which are not supported by law or facts,” Kidero lamented.

KRA had labelled the amount as unknown funds. The agency’s commissioner of investigations required him to explain how he got the money.

In reply, Kidero provided receipts and mobile numbers of those he claimed were the contributors. KRA, however, concluded he ought to pay tax for the same.

In March, the tax tribunal agreed with Kidero that he was only required to provide proof of his source of money to KRA and nothing more.

“The tribunal takes note of the nature of political campaigns in Kenya and makes a finding that in the instant case, the appellant was able to demonstrate the source of the funds. The nature of fundraising or harambees as commonly known is that people are invited and give their contributions often from taxed incomes, sometimes without any records of the same and furthermore, there was no requirement for the taxpayer to produce a record of each and every taxpayer,” the tribunal concluded.

KRA in its appeal before the High Court faults the tribunal for finding that Kidero had proved that Sh423 million was from harambees and was meant to run his campaign juggernaut. It argues that it was impossible to distinguish money in his accounts.

It claimed that he got money earlier than the campaign period.

In its assessment, KRA claimed that Kidero had increased his shareholding in Family Bank in 2013 by buying 3.19 million shares. He is also said to have bought another 7.8 million in 2014.

According to the taxman, in November 2014, he took a Sh36 million loan to buy 1.4 million shares. “We were unable to trace the source of funding for the remainder of shares worth Sh239 million. This figure has been charged as undeclared source of income,” KRA informed the former governor.

KRA also went for Kidero’s properties -- Great Rift Valley 91A and 91B which it valued at Sh50 million, a residential home in Muthaiga valued at Sh300 million, Rosslyn Estate house at Sh90 million and Vista Investment Limited which is rented and valued at Sh65 million.

Kidero opposed the assessment. On Family Bank shares, he argued that they are not additional income and cannot be charged.  On funding of properties charged, he faulted KRA, saying the same could also not be charged.

He said his wife Susan had declared rental income for the amount he is alleged not to have declared.

Kidero said Vista Investments Limited is a different entity which pays its own tax. He said Gem Apartment Limited took a Sh74 million loan from Family Bank to buy a property owned by Vista. He, however, changed his mind and bought shares in the firm.

On the Muthaiga property, the former governor claimed the commissioner was on a guesswork mission in order to raise a non-existing tax.

“The property is jointly owned by my spouse Susan Akello Mboya and I and it was purchased in 2010, which is a period outside the investigation period and therefore does not constitute additional income chargeable to tax,” Kidero alleged.

He claims they bought the property at Sh83 million and not the Sh300 million assessed by the commissioner.

The former governor also argued that he bought Rosslyn house at Sh50 million and not Sh90 million. This, he says, was from a mortgage from Commercial Bank of Africa (CBA).

“I verily believe the commissioner of investigations and enforcement was under pressure from my political opponents to harass and project me in bad light in my political standing as governor of Nairobi City County, as one who owed KRA Sh680 million and was non-tax compliant without allowing me my constitutional right to fair administrative action,” he claimed.

The commissioner of tax, he says, then adjusted the tax owed to Sh427 million.

KRA is aggrieved with the tax tribunal’s finding in Kidero’s favour.

It accuses the tribunal of making pronouncements on a criminal case which is not before it, coming to a wrong conclusion. It wants the judgement reversed in its entirety.

By Olivia Odhiambo | 6 hours ago