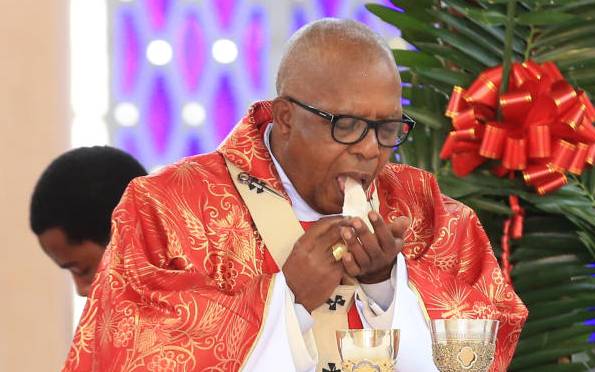 Atheists in Kenya Society has called for the arrest of Catholic Church leader in Kenya Cardinal John Njue (above) alongside other clerics for breaching the health laws during the Palm Sunday.

The atheists argued that the clerics disregarded the Public Health laws and procedures which call for social distancing to combat the spread of the coronavirus.

“We are calling for the arrest of the Catholic Church leadership that conducted the mass at Holy Family Basillica today (Sunday), including His Eminence, Cardinal Bishop John Njue,” they say in a statement.

The group argued that the government has been firm on arresting other people found to have breached the social distancing rules, and therefore, the clerics ought not to evade the prosecution.

They state: “It should be recalled that fifteen athletes were arrested in Elgeyo Marakwet earlier this week after they were found training in a group contrary to social distancing rules put in place to protect the public against the spread of Covid-19.”

“The church leadership should not be given preferential treatment even as we battle this global pandemic.”

They urged law enforcers not to be selective in their war against the spread of coronavirus arguing that it would regress the gains made.

The atheists referred to the incident in which unnamed clerics were standing next to Cardinal John Njue during the Palm Sunday mass without regarding the one-metre rule.

“We observed that the priests conducting the mass led by his eminence, Cardinal Bishop John Njue disregarded the social distancing rule. For instance, one of the priests was seen holding a microphone next to Cardinal John Njue using his hand,” they note in a statement.

They have called on Kenyans and the government to adhere to the social distancing rules arguing that they are internationally proven to be effective in reducing the spread of Covid-19.

The group also reiterated the sentiments of ODM leader Raila Odinga, who recently penned a message to Kenyans urging them to personalise the war against coronavirus.

In his message, Mr Odinga urged young people to use their energy and influence to educate colleagues and family members on the measures to combat the disease.

The government has been firm in enforcing the social distancing rules, which prohibit social gatherings of any nature.

Last week, twelve Akorino church members were arrested in Nyandarua County while conducting prayers in a cave despite the ban on such gathering. They were however released hours after arrest. Another arrest was conducted in Elgeyo Marakwet County where athletes were found to have gathered to train without considering social distance directives.

Yesterday, close to twenty worshippers were arrested in Siaya County for congregating for prayers and defying social distancing directive.

The first shipment arrived on March 23 with 20,000 laboratory diagnostic test kits among other equipment.

By Caleb Kingwara | 7 hours ago