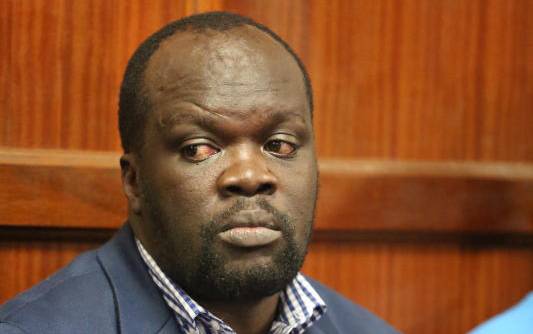 Blogger Robert Alai will on Monday be charged in court for posting false information over coronavirus.

Alai was arrested on Friday and taken to Muthaiga Police Station where he was locked up over the weekend.

He is accused of contravening the Computer Misuse and Cyber Crimes Act 2018, which prohibits the publication of unverified information.  The law spells penalties in forms of fines or jail terms for such offenders.

Section 22 (1) of the law states: “A person who intentionally publishes false, misleading or fictitious data or misinforms with the intent that the data shall be considered or acted upon as authentic, with or without any financial gain, commits an offence and shall, on conviction, be liable to a fine not exceeding five million shillings or to imprisonment for a term not exceeding two years, or to both.”

On March 19, Thursday, before Alai’s arrest and questioning, Health Cabinet Secretary Mutahi Kagwe fired a chilling warning to those he accused of peddling lies about the government’s handling of the virus.

Kagwe warned of arrests saying that misinformation was jeopardising the government’s efforts to fight Covid-19.

Alai, who commands huge social media following also mocked National Prayers for coronavirus which was held in State House on Saturday when he tweeted:

On Sunday, Mr Kagwe announced an increase in the number of those tested positive for COVID-19 from eight to fifteen. Among them is the Kilifi Deputy Governor Gideon Saburi who tested positive after coming from a trip to Germany.  The government on Saturday came up with a raft of measures to curb the spread of the coronavirus. Among them is the directive to reduce the number of passengers by the Public Service Vehicles, closure of bars, and restrictions on weddings, burials and religious gatherings.

By Lucas Ngasike | 2 hours ago