Road closure alert: Section of Thika Road to be closed for three days

The Kenya National Highways Authority has announced the closure of a section of the Thika Superhighway at the Mangu Road junction (Njomoko) in order to allow for a footbridge to be erected.

In the statement posted on NTSA’s twitter handle, the road will be closed from 11pm to 4am. 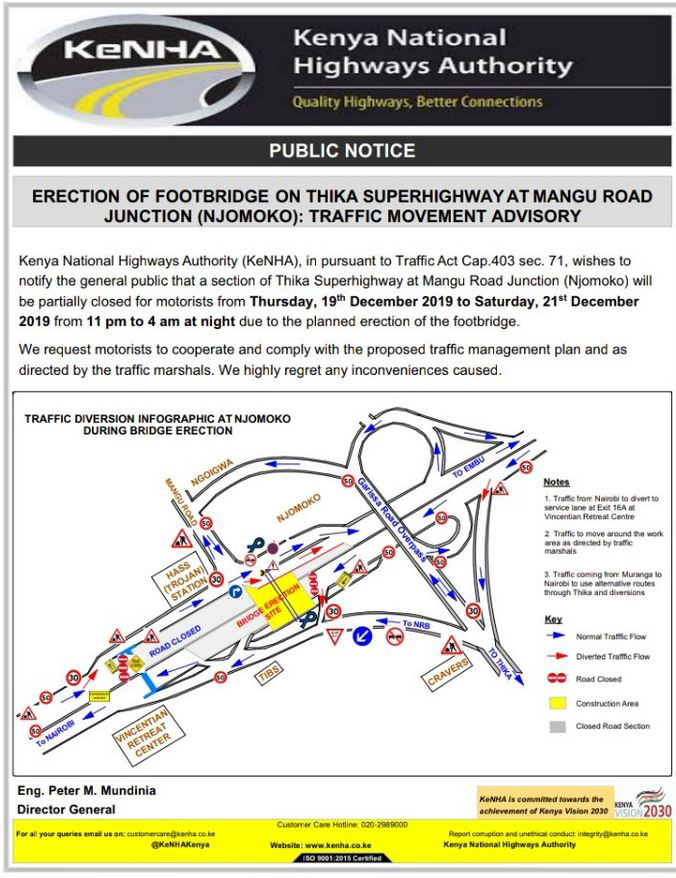 KENHA has directed motorists to comply with the proposed regulations to allow free flow of traffic.

“We request motorists to cooperate and comply with the proposed traffic management plan and as directed by traffic marshals. We highly regret any inconveniences caused,” read part of the statement.

Earlier this week, the Kenya Urban Roads Authority (KURA) closed of a section of Likoni Road at Enterprise road junction.

According to a public notice issued by KURA, the disruption is due to the hoisting of beams as part of plans to improve the junction.

Enterprise road, whose refurbishment contract was awarded in 2013, was expected to ease traffic flow in the hub but has been a major source of traffic snarl-ups over the past few years.

Other than losses that it has earned manufacturers, the road can partly be blamed on a slowdown in investments by other firms that have cited poor infrastructure in Industrial Area.

This, among other reasons, has seen companies opt to set up in other areas, denying them synergies that would accrue to players operating from a common hub.

By Hamza Yussuf and Brian Okoth | 14 hours ago

By Philip Muasya | 15 hours ago