I am not Mary, please call me James 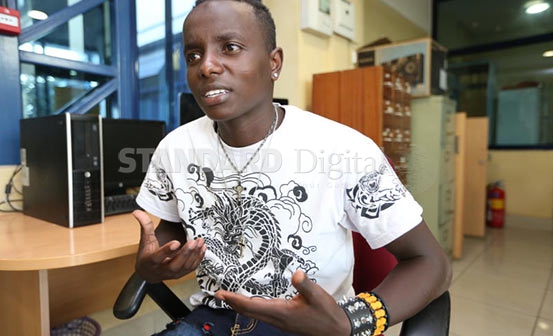 James Karanja is in the thick of the battle of his life; a struggle with nature, science and man to be recognised as a man. “I am not Mary, my name is James,” he told The Standard on Saturday in an exclusive interview, yesterday.

James, 25, was brought up as a girl and educated in a girls’ school for 18 years because of the wrong gender assignment at birth.

“When I was born, they could not establish my gender so the nurses and my mother named me Mary Waithera, a name and identity I carried for 18 years,” says James who went to a mixed primary schoolbefore enrolling in an all-girls secondary school in Molo.

Standing at 5 feet and 4 inches, James is every inch a man. Documents obtained by The Standard on Saturday show that he is biologically a man. But officially, he is Mary Waithera.

He was single-handedly brought up by his grandmother, Teresiah Waithera, after his mother developed a medical condition which made it difficult for her to take care of her child.

According to his grandmother, she brought him up as Mary Waithera but she noticed that he had odd preferences. He carried water on his shoulders and not on the back as most girls in the village. He was also very fond of mechanical tasks, she said.

It was while in Form Three at Kambala Secondary School in 2009 that hormonal changes set in. James knew he was in trouble. In trouble because he was attracted to the girls, his voice broke and other body features were different from what his peers would narrate about their advancing maturity.

“The pack of sanitary pads bought in Form One was still in my box untouched and when my voice began to change with other hormonal changes, it affirmed what I had always suspected. I am a boy,” James said.

Schoolmates referred to him as “Mary Tom” largely because of his masculine features. According to a classmate Anne Munjuga, Mary Waithera was friendly and hardworking. She excelled in academic and extra-curricular activities. Anne never found it odd that her classmate had masculine features.

“In fact, she was the best footballer and enabled us win many tournaments,” says Anne who shared the same dormitory, Chania, with Mary Waithera. When they nicknamed her “Mary Boy”, Anne says, they did not mean to offend her. It was just that, a nickname.

But when she found out that Mary had changed to Karanja after school in 2010, she was shocked. But she has now come to understand that she had wrongly been brought up as a girl. “We later met and she explained the situation which we now accept,” Anne said in an interview.

James explains: “At home I opted to wear trousers because I was most comfortable in them. I’m not gay, neither am I a transgender. I’m a man brought up wrongly.”

He says his leadership skills were honed at school where he was elected the assistant head girl in 2009 and as the head girl the next year. He completed school in 2010 and scored a B- mean grade.

James wants to pursue his dream course, Bachelor of Business Information Technology but his academic certificates and other official documents refer to him as Mary Waithera. Initially he hid his gender but later gathered courage to share his story with his family.

Reproductive health specialist Koigi Kamau said though rare, such cases are known as ambiguous genitalia and lead to misinterpretation of genetic coding. “From medical tests conducted, it is clear that he is a male because he has broken his voice, has male reproductive organs. He has no uterus,” Prof Koigi said.

According to a medical report seen by The Standard on Saturday and signed by Medical Superintendent Catherine Gitau of Gilgil Sub-County, James was wrongfully identified as a female since birth.

“However during development, his features are male and a pelvic ultrasound shows he has no uterus,” reads the report dated December 30, 2015.

In a small town in Dominican Republic known as Guevedoces, girls turn into boys at 13 years. This condition is attributed to a rare genetic disorder from a missing enzyme.

Nominated MP Isaac Mwaura said he would present a petition in Parliament on behalf of persons with gender disorders concerning their registration and legal documents.

“A gender disorder is a critical issue because it’s about a very sensitive status both in real life and crucial demographic data. You can imagine if you are not sure if you are male or female,” said Mr Mwaura.

From a social perspective,  roles that are ascribed to gender can confuse those affected, said the legislator.

The MP says that although the immediate task is to ensure his identification and academic certificates are corrected to capture his actual gender, he is also keen to enable James form an association to champion for the rights of persons with gender disorders.

Whereas the condition is usually not life-threatening , James believes that it has led to social misunderstanding because family, friends and villagers who saw him growing up as a girl now see him as an outcast.

“Sometimes back, we discussed the the matter and I understood that this was a life-changing time and he needed our support,” his uncle Joseph Njuguna said.

“We called a family meeting and explained and he has now adopted his maternal grandfather’s name as per family traditions because he comes from a single parent family,” his uncle said.

Albinism in Kenya: A Prisoner of my skin

Raila heads to Coast as polls fever hots up

By Caleb Kingwara | 43 minutes ago

By Mireri Junior | 46 minutes ago