Maraga: Support the Judiciary as the last bastion of hope on the rule of law

By David Maraga | 1yr ago 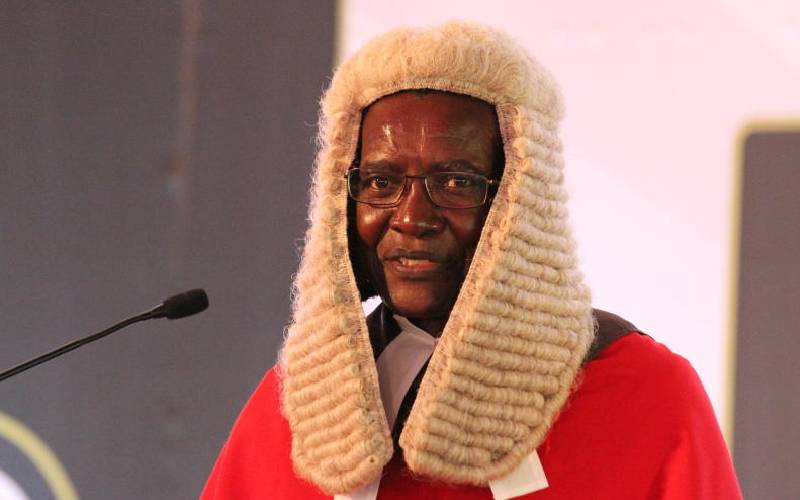 I am delighted this morning to welcome you all to the presentation of the State of the Judiciary and Administration of JusticeReport (SOJAR) for the Financial Year 2019/2020.

But I am also happy to see you today as this is my last report before I retire as theChief Justice. The report therefore looks at our performance during this FY19/20 but also occasionally glances at the progress and challenges throughout my four-year tenure. Therefore, please allow me to make a few observations.

One of the most transformative provisions of our Constitution, and which, as leaders and institutions, we need to be constantly alive to, is one that is worth restating: that Judicial power and authority, like all other State power,is explicitly recognised as emanating from the common sovereignty of the people, and donated to State institutions.

The powers and sovereignty donated to State institutions are, thus, exercised on behalf of and for the benefit of the people.

So, the delegates like myself should regularly report and account to the Kenyan people.For the Judiciary and the justice sector generally, the Constitution goes further to lay down specific and core principles and objects that should provide fundamental guidance and direct the exercise of judicial power and authority.

Article 159 explicitly provides that judicial authority is derived from the people and shall be exercised in a manner that promotes justice for all, equally and without discrimination, and that justice should be administered in an expeditious manner that ensures no delay.

The Constitution also provides that the administration of justice should embrace and incorporate alternative forms of justice, including: reconciliation, mediation, arbitration and other alternative dispute resolution mechanisms.

There is no doubt that the Judiciary is still imperfect but it stands out as one of the most reformed public sector institutions in the last decade, at least both in effort and effect. On every metric of service, our performance has been on an upswing - jurisprudence, access to justice, case backlog reduction, enhanced integrity, court
infrastructure, technology, staff welfare, accountability, public outreach and so on.

And this record is not a fairy tale: it is there to see in the 7 editions of SOJAR that have been prepared and presented since 2012, and which are all in the public domain. In 2012, my predecessor, Retired Chief Justice (Dr) Willy Mutunga, embarked on an ambitious Judiciary transformation plan dubbed “the Judiciary Transformation Framework (JTF)”. The JTF, which lapsed in 2016, facilitated fundamental structural and institutional changes that set into motion a number of processes geared at enhancing access to justice, which included: case backlog clearance, leveraging on technology for service delivery, and expanded the court establishments. I assumed office on 19 October 2016, and three months later, on 26 January 2017, I launched the current Judiciary Blueprint, ‘Sustaining Judiciary Transformation: A Service Delivery Agenda (2017-2021)’ (SJT).

The SJT blueprint has guided service delivery and the administration of justice for the last four years. The thrust of the SJT was to build on the gains of the previous blueprint, the Judiciary Transformation Framework (2012-2016) (JTF) by accelerating service delivery using the initial structures and systems that were put in place during the JTF Phase.

Case backlog and the rising workload in the courts in Kenya is a perennial challenge and concern for the Judiciary and the public. Case clearance, thus, remains a core focus for both the JTF and SJT documents with impressive results over the years. During the launch of the SJT, at the beginning of my term, I made a pledge to the nation that the Judiciary was to clear all cases that were five years and older, and do so within two years. At that time, there were 170,186 cases that fell in this category. And with the passage of time, between 2017 and 2020, some more cases transitioned to that 5-year category. I am happy to report that through various strategies, the Judiciary was able to clear a 201,206 cases that were 5 years old and over, between the period of January 2017 and June 2020. As at the end of the reporting period, that is June 30th 2020, there were only 35,359 cases that were over 5 years old that remained unsolved, representing a 79% overall reduction.

That feat was achieved as a result of dedicated strategies such as service weeks, which saw Judges and Judicial Officers move to stations with heavier backlogs to assist in clearance of those cases.

Besides the clearance of the older matters, courts have greatly improved their efficiency in the disposal of filed cases. A total of 337,510 cases were filed in our courts during the period under review, out of which we resolved 289, 728 cases. While the current measures to combat Covid-19 resulted in downscaling of in-person court operations and other measures geared at placing the pandemic under control by leveraging on technology, we have continued offering services.

I am confident that these achievements, as well as other components of judicial digital transformation, which are captured in the Judiciary ICT Masterplan will be progressively implemented to facilitate enhancement of access to justice. Despite the progress and steps made, I must point out that we have achieved some of the above enumerated results under fairly difficult circumstances. The Judiciary’s performance would certainly have been different but for three major reasons: interference with and frustration of the Judiciary’s independence; refusal to grant the Judiciary financial autonomy; and disobedience of court orders. It is indisputable that during the former constitutional era, like it was the case during the colonial era, the Judiciary was an appendage of the Executive. Although the
Independence Constitution textually embraced the doctrine of separation of powers and provided for an independent Judiciary, that separation was only on paper.

The Judiciary remained, substantively, at the call and beck of the Executive Arm of Government. As regards the appointment of Judges, Article 166(1)(b) of the Constitution states that “the President shall appoint ... Judges in accordance with the recommendation of the Judicial Service Commission.”

Despite this clear provision and three court orders, the President has failed to appoint the 41 Judges (now 40 because one has since, unfortunately died) recommended to him by the JSC. Article 166(1)(b) and indeed the entire Constitution does not require the President to perform any other act upon receipt of the names recommended by the JSC, except to appoint them. The President cannot cherry-pick from the list of nominees. If that is allowed, the independence of the Judiciary will be irreparably ruined.

When, in September 2017, the Supreme Court nullified the Presidential election, the President threatened to “revisit” and the following financial year, we saw a reduction of the development vote of the Judiciary’s budget from Sh2.1 billion to a paltry Sh50 million [yes, million].

That is why all over the country Gok funded court buildings are not completed yet the World Bank/JPIP ones have and are being completed and launched.

Contrast these reprisals with how the JSC operates. If it may give you comfort, you may be glad to know that the Judicial Service Commission, which employs, promotes and disciplines judges and magistrates, has on some occasions had court orders issued against it.

If it appeals and loses, at it has at times, it obeys and such decisions have had no bearing on the career stability or progression of those judges and magistrates who have issued them. We have not gone on a petulant rant against judicial officers who are just doing their jobs. And that is as it should be.

For instance, a poor peasant takes his neighbour to court for trespass and the case takes a number of years to determine before he obtains an eviction order. As the Judiciary has no coercive power, it depends on the Police to effect such eviction. When the warrant of eviction is given to the Police, some start a newtrial at the Police Station, presided by the OCS, literally questioning the propriety and wisdom of the Court decision.

Similarly, there are many cases involving the Government as the judgment debtor which are routinely disregarded leaving the decree holder scornfully deriding the courts for issuing paper judgments. This is a terrible dent in the administration of justice in our country.

There are many such judgments where wananchi are suffering. Ladies and gentlemen, we are either a nation governed by the rule of law and the principles of constitutionalism, or we are a jungle Republic that Thomas Hobbes talked about a few centuries back where life is solitary, poor, nasty, brutish, and short. And history is replete with examples that those who nurture the tree of impunity tend to in the not- too-distant future, fall victims of their own labours. It is in this vein that I ask Kenyans to reflect on the constitutional changes that are proposed: the True North, ever constant criterion in assessing any changes affecting the Judiciary should be whether the envisaged changes aggrandize or diminish judicial independence.

Any changes which breaches separation of powers or threaten judicial independence would be, without a doubt, a
dangerous retrogression from the path of constitutionalism that Kenyans chose in 2010.
As I exit in the next few weeks, I want to assure Kenyans that I leave behind a solid Judiciary. The Judgments our courts have made since 2010 attest to this.

My fellow countrymen, if you want our courts to determine cases within two years and attract investment as happens in countries like Singapore, your Parliamentarians have to commit reasonable resources to the Judiciary.

To my fellow Judges and Magistrates, despite all the above enumerated challenges, I beseech you to continue doing your very best. Please be courageous and discharge your duties with unwavering integrity and true to your oath of office. You are the last hope of this nation. Kenyans are proud of you. As your Chief Justice, I am myself very proud of you.

To our President: it is clear there is a difference of opinion between me and you. But I want to assure you and the entire nation that I have nothing personal against. To the contrary I have given you your respect as our Head of State. I am totally apolitical and hold no brief for any politician or political interest. So why would I want to fight you?

Once again to all Kenyans, thank you very much. It was my singular honour and privilege to be of service to you as your Chief Justice. If in any way, I annoyed you or did not live up to your expectations, please understand that I am human and forgive me. Though I did not achieve what I planned to do, I retire a very happy man.
God bless you and God bless Kenya and her people!

-This is an abridged version of the speech by Chief Justice David Maraga in yesterday’s State of the Judiciary report.

Election observation missions should up their game
Opinion
By Raphael Obonyo
24 mins ago
How fintech tools can help cushion Kenyans during inflation
Opinion
By Munyi Nthigah
1 hr ago
Premium Inside the Equity-KCB supremacy war
Financial Standard
By Dominic Omondi
1 hr ago
Mombasa port operations will not be interrupted during polls
Business
By Philip Mwakio
1 hr ago
.