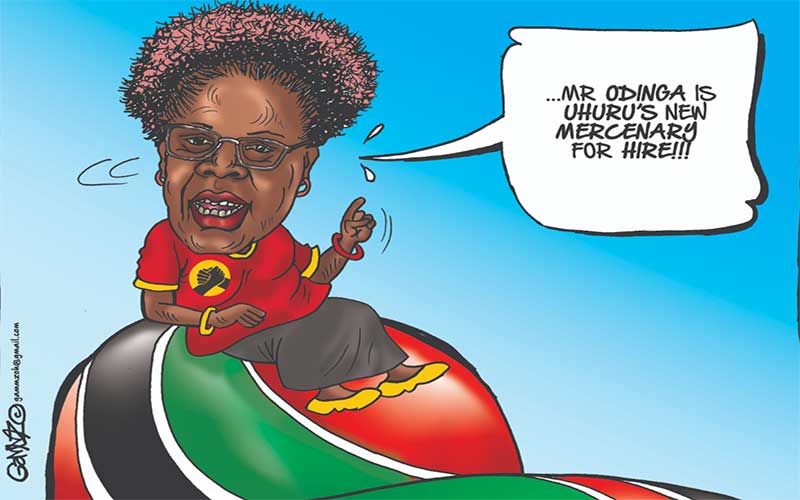 Let he or she who is not a cat’s paw, be the first to cast a stone. Alice Wahome has been telling us the obvious, that David Murathe does not speak on his own behalf. But is she herself speaking on her own behalf?

Cat’s paws such as Murathe and Wahome are used by other people, usually more powerful, to do and say things that they themselves will not. The ‘higher placed’ person cannot do or say these things because it would be detrimental to their reputation, to their strategy, or to both. And so they engage the ‘lesser political mortals’ to do the dirty work. They are likened to cat’s paws because when the claws need to come out, they are readily extended on behalf of the boss, but the boss’ own hands remain ‘clean.’

Kenya’s political history is rife with cat’s paws at the service of presidents and other political honchos. A little over 50 years ago, the youthful fireball, Tom Mboya executed schemes for the government. In his cleverness, Mboya helped Kanu to engineer its Constitution to abolish the position of Vice President and replace it with eight vice-presidents representing the provinces. This system was designed to lock out contenders from inevitably succeeding Kenyatta as party president. This was of course intended to politically weaken Oginga Odinga.

The scheme worked perfectly. Oginga founded his party KPU (Kenya’s People Union), and was made to go back to the ballot in the 1966 little General Election. Two years later, he was forced into political limbo. In the end, the presidency was never to be his.

Almost 20 years later, in the late eighties was a famous and effective cat’s paw by the name Joseph Kamotho. In September 1988, Kenneth Matiba was rigged out of the Kanu chairmanship in Murang’a in favour of Kamotho. In December, Matiba resigned from the Cabinet. In return, Kanu stripped Matiba of his party membership and he lost his parliamentary seat. A by-election needed to happen. And it is during this election that Kamotho was used as the cat’s paw. In the election, Julius Kiano received over 90 per cent of the queue or ‘mlolongo’ vote, but he was declared the loser. The provincial administration and Kamotho had decided that they would prefer a more pliable MP, by the name: Gidraph Mweru. The Kamotho team modified the results of the Kanu primary. They took Matiba’s previous figure of 24,000 and added it to Gidraph Mweru’s.

Being a cat’s paw like Murathe and Wahome is not a bad job. It pays handsomely in political mileage. The only problem is that cat’s paws often become scapegoats. They become the sacrificial lamb either when the task is done, or when the boss needs someone to take the fall for him.

Fast-forward to the 1990s and two Kanu loyalists and cat’s paws were sacrificed in the Kanu and NDP merger process. Together with the faithful Kamotho, George Saitoti who had been Daniel Moi’s long term loyal VP, was suddenly cast aside all for the potential 600,000 votes that Raila Odinga was sure to rope in from his region. In recent years, cat’s paws have become so prevalent that no politician speaks on their own behalf anymore. In fact, the modern day Kenyan cat’s paws have been officially classified into Tangatanga and Kieleweke.

But in the big, vast sea of cat’s paws big and small, one will increasingly stand out as we head towards the all important 2022. In fact the 2019 cat’s paw of the year award goes to the Jubilee Party SG Raphael Tuju. His effectiveness lies in where he is placed, high up in the political party structure. The question is; how long will he remain a good cat’s paw before becoming the inevitable scapegoat?

Locusts are destroying crops, floods have displaced families while politics is threatening our unity