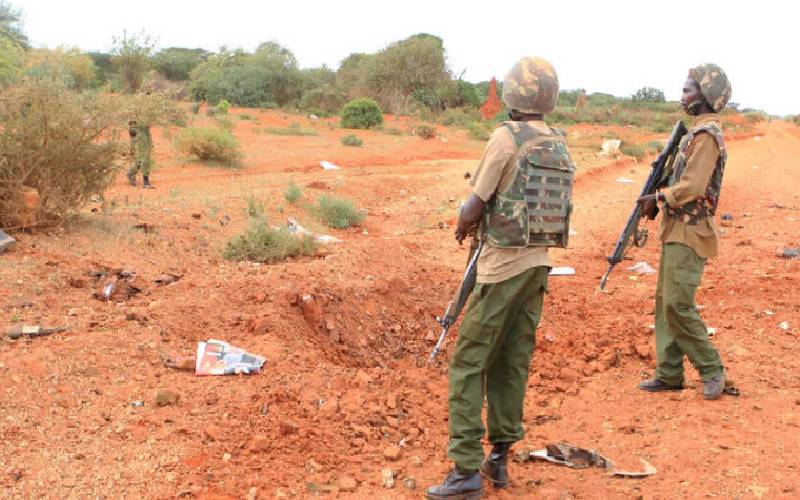 Two killed people were on Monday, May 3, 2021, one seriously injured in suspected al-Shabaab Attack in Lamu East.

The vehicle they were travelling in ran over an improvised explosive device (IED) that was planted at the outskirts of Ishakani village about 15 kilometres from Salama Camp.

The attack happened at border point 27.

The attack is said to be targeting the border wall that is being constructed at the Kenya-Somalia security border wall.

In March 2021, the militants ambushed a water bowser ferrying water to the construction site of the Kenya-Somalia security border wall, killing one person.

Macharia said the bowser, with a driver and his assistant on board, ran over an IED believed to have been planted in its way by the militants before exploding at around 7:30 am in Lamu county.

Macharia said the vehicle had just left the border town of Kiunga in Lamu East and was heading to Usalama camp on the common border when it ran over the explosive device.

He said troops had been adequately deployed to hunt down the militants, noting that a team of security officers has been mobilised to look into the safety of the construction workers and other staff at the site.

The government official, however, reiterated that construction works at the border wall had not been hampered by the attack and that the scene of attacks is far away from the camp.

A century later the hotel, the brewery, its famous brand Tusker and the stocks exchange are still going strong.

By Weldon Kipkemoi | 4 hours ago

By Benard Sanga and Ishaq Jumbe | 1 day ago

By Macharia Kamau and Philip Mwakio | 4 days ago

Governors hard pressed to explain use of Covid-19 funds
Feedback