By Renson Mnyamwezi | 6yrs ago 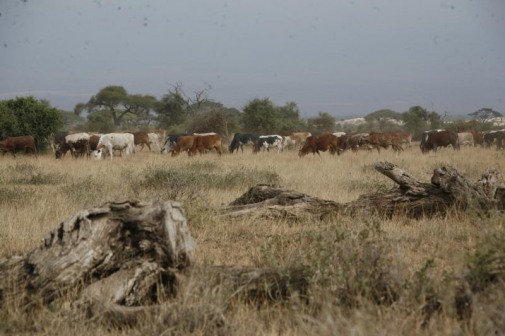 Uncontrolled grazing in the Tsavo National Park has sparked concern among wildlife conservationists.

The activists said the activity has led to environmental degradation, which has been been blamed for the persistent human-wildlife conflict in the county.

The executive told the meeting that the livestock belong to powerful individuals and senior national government officials.

"The Tsavo ecosystem has been turned into a ranch. Tourists have been persistently complaining of seeing more livestock than wildlife and that they do not get value for their money. The rate at which the park is being degraded is scaring away tourists and investors," noted Mwangeka.

"We cannot sit back and watch as Tsavo continues to suffer at the hands of corrupt individuals. The Government needs to intervene and save the fragile ecosystem that harbours a variety of flora and fauna," said Mwangeka.

He added: "The problem is that the livestock grazing in the park are from outside."

He said locals found near the ecosystem were subjected to harassment and prosecution for trespass and poaching, while the illegal grazers were left scot-free to continue with their illegal activities.

The county leaders demanded the immediate removal of senior KWS officials, accusing them of doing little to address the frequent livestock and wildlife incursion in parks and settlement areas.

Governor John Mruttu led other leaders among them MPs Jones Mlolwa (Voi), Andrew Mwadime (Mwatate) and over 20 MCAs in closing the gate.

Mr Obrien and other senior KWS officials have since been transferred. Obrien was replaced by former Amboseli National Park Assistant Director Julius Cheptei.

"We hope the new team will live to the expectation of the local community," said Mwangeka.

At the same time, the executive challenged KWS to carry out a feasibility study on the carrying capacity of the vast Tsavo, the largest wildlife ecosystem in the country.

"There is a huge chunk of land in Tsavo that is lying idle and that is why the ecosystem is prone to frequent livestock invasion. We want a study carried out to help determine whether Tsavo is underutilised or not," he said.

At the same time, Mwangeka said the national government was yet to compensate victims of wildlife attacks in the region. He said more than Sh1.7 billion is required to compensate the victims.

The region, he said, has the worst human-wildlife conflict record in the country.

"The money collected from the three national parks in the region should be used to compensate the victims of wildlife attacks," added Mwangeka.

Mr Narisah said it is the responsibility of all Kenyans to participate in wildlife conservation efforts if poaching is to be eradicated.

"The Government will not tolerate any person found engaging in poaching activities among other wildlife-related crimes irrespective of position in society. Security agencies are alert to decisively deal with criminal elements that have been sneaking into protected areas to slaughter wildlife and destroy the environment," he said.