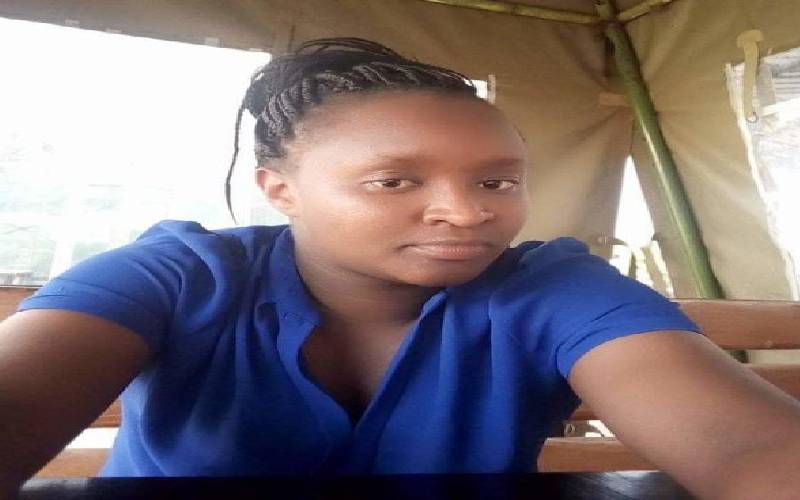 On Saturday, Judy Wanjiku (pictured)  boarded a matatu in Ruiru. Her destination was Mwea, about 76 kilometres away. Her fiancé was eagerly waiting for her, but as fate would have it, she would only make it to Juja.

Hers was a routine that her brother Isaac Muthua and neighbours were familiar with.

On weekends, whenever the 26-year-old Wanjiku, who was a banker, took a break from work, she would throw a few clothes in a bag and make the two-hour trip to Mwea to spend the weekend with her boyfriend.

Their long-distance relationship worked on this principle, but on this last Saturday, Wanjiku set off on a journey that would be perilous, and in Mwea, her fiancé would wait impatiently for a lover he would never see alive.

The employee of Equity Bank in Ruiru was declared dead on Sunday morning from apparent internal injuries she sustained the previous night when she was assaulted and kicked out of a matatu, aborting her journey.

Family sources familiar with the incident said Wanjiku had a disagreement with the crew of the matatu she had boarded to Mwea at around 6.30pm on Saturday. “They had agreed that she would pay Sh400. However, something happened along the way and she was hauled out of the vehicle in Juja,” said Eliud Maina, a family friend.

“When she was thrown out, her head hit the tarmac, and if it was not for bystanders who came in between her and the driver, we understand, the vehicle would have run her over.”

From the Sh500 note that she had handed the driver to deduct the Sh400 that would cover the fare from Ruiru to Juja, the driver allegedly deducted Sh200, saying it was her fare from Mwea to Juja.

“Normally matatus that ply along that route do not have conductors. She had an exchange with the driver and was told to alight. The driver then forced her out and her head hit the ground,” the family friend said.

Wanjiku, who was epileptic, had a fit and when she came to, asked for her brother, Muthua. He arrived at the scene and accompanied her to Equity Afya Clinic in Ruiru at 7pm before she was referred to Thika Level 5 Hospital.

She walked in by herself and narrated to the attending physician what had happened, and reported that she had had a convulsion after the incident.

She, however, had no signs of any physical injuries and was advised to take her medicine and report back to the hospital in the event she experienced any more convulsions, a source familiar with the case told The Standard.

Wanjiku spent part of Saturday evening under the watch of her brother as she chatted with her boyfriend on WhatsApp.

Convinced that she was fine, Muthua left. At 9am the following morning, however, he received a call to inform him that his sister had been found unconscious beside her bed.

Neighbours had forced their way into the house when they called out to her and she did not respond. The police yesterday tweeted to say the vehicle Wanjiku had boarded was in their custody.

“The vehicle KCZ 729C has been detained in Wanguru Police Station in Mwea. The driver and conductor are still at large. We assure you that action will be taken against the culprits involved,” read the tweet from the National Police Service-Kenya account.

By James Munyeki | 22 hours ago