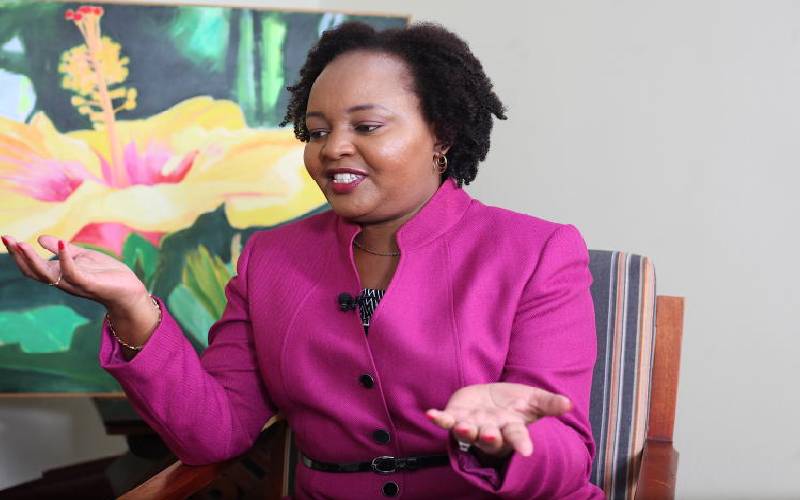 A Senate committee cited corruption in award of lucrative tenders by the Kirinyaga County government, blamed procurement officials but cleared Governor Anne Waiguru (pictured) saying there was no evidence of her role in the improprieties.

The committee said the Kirinyaga County Assembly that had impeached the governor did not substantiate the charges of gross violation of the Constitution, abuse of office and gross misconduct.

However, the 11-member committee said it had uncovered potential evidence of graft in the award of tenders, but ruled there was no “nexus” between the government and those who sat in the tender committees. The team said the assembly did not prove its claims that they were Waiguru’s cronies.

The Senate, however, invited the Ethics and Anti-Corruption Commission (EACC) and the Directorate of Criminal Investigation (DCI) to investigate those culpable of illegal award of the mega tenders.

“The committee notes that it is apparent there exists a well-orchestrated and complex web of corruption in the tendering process at the County Government of Kirinyaga. To this end, officers who are found culpable should take personal responsibility for their acts of omission or commission,” said the committee report tabled in the Senate yesterday.

It added: “The committee recommends that the EACC and the DCI pursue this matter with a view to bringing the culprits to book.”

It cited a tender for the proposed water works for Mwea Makima project, which was awarded to Eva Trading Agencies Limited, a company associated with the family of Mugo Ndathi, the County Chief Officer for Finance.

Edwin Gicobi Ndathi, who is a brother to the Chief Officer for Finance, holds 300 shares in the company, said the report.

“The committee observed that the assembly proved impropriety in the award of this tender. There was clear case of conflict of interest but involving the accounting officer and the company in question. One of the shareholders is the brother to the accounting officer who executed the contract,” stated the report.

Another tender for the design, development, installation and commissioning of the Integrated Hospital Management Information System for which the county paid Sh50 million was also faulted by the Senators.

“The committee observed that the tender was clearly mismanaged. The tender requirements were not adhered to,” read the report.

The Kakamega Senator Cleophas Malala-led committee further noted that the firm awarded the tender - Velocty Partners Ltd - was registered in May 2017 and was awarded the tender the following year despite not meeting the five-year requirement stipulated in the tender documents.

The team noted that one Wayne Gichira, the ICT Adviser to the governor, conceptualised the project, chaired the evaluation committee, co-signed the contract with the Chief Officer for Finance and were responsible for the testing of the system.

The committee further observed that while payment was made in full, the Integrated Hospital Management Information System is not operational “and therefore the county assembly is right in alleging that there is no such a system”.

“It is important to note that making payment prior to the User Acceptance Testing is an offence under the law,” read the report.

Yet another tender for construction of Kagio Matatu Parking Phase One, which was reserved for the Access to Government Procurement Opportunities (AGPO) programme, was found to have been irregularly awarded to a firm that is not listed in the AGPO certified list of 2017-2018.

“The governor does not take part in procurement processes at any tendering stage, and did not usurp powers of the accounting officer,” added the report.

The team also said there was no evidence that Pauline Kamau was recruited by the County Public Service Board at the insistence and coercion of Governor Waiguru. The committee also noted that the assembly “did not draw a nexus between the governor and the appointment of either Ms Kamau or Mr Gichira to a tender committee.” Mr Carilus Otieno, as the Head of the County Procurement Unit, confirmed that the governor had not taken part in the formulation of any tender committee, the report added.

“However, the committee noted that the circumstances under which Pauline Kamau was recruited raised a lot of questions. The said officer was not qualified to hold the office of Director of Administration and further that her recruitment was pushed through by the governor. The assembly stated that the County Public Service Board was coerced to issue a recruitment letter. This, however, does not bar her from being appointed to serve in a tender committee.”

Yesterday, the committee tabled the report before the House that affirmed rot under Waiguru’s watch but exonerated her on the basis of lack of nexus with the wrongdoers. Instead, the 11-member committee faulted the toxic relationship between the governor and MCAs, who sought her removal from office.

“The committee is unimpressed and must express its reservations on the pattern of conduct of the governor that it has perceived on the basis of the evidence adduced before it. For example, while it is open to the governor to indulge in less important activities, it is an uninspiring and disturbing picture when the governor cannot similarly find time to appear before the assembly to present the annual State of the County address. The condescending attitude of the governor towards the assembly is uncalled for and does not inspire confidence and trust in the County Executive leadership,” said the report.

It added: “The governor appears to require to be reminded of the high calling of her office and the responsibilities of leadership as set out under Article 73 in the Leadership and Integrity Chapter of the Constitution.”

In the end, the committee, in its 88-page report, saved Waiguru saying: “The committee having investigated the matter, finds that the two charges against the governor have not been substantiated.”

“The proceedings exposed acrimonious, contemptuous and cold relationship between the assembly on the one hand and the governor on the other that threatens to grind the county to a halt,” the committee documented. The report went on: “It is inconceivable that in these circumstances the people of Kirinyaga can be enjoying the benefits of devolved government that the Constitution avails.”

The senators called for urgent measures to bring the two protagonists to the table.

“In this respect, cognizant of the Senate’s role as the custodian of the interests of the counties and their governments, the committee recommends that, through its relevant organs, immediately assumes jurisdiction and invites the County Assembly and governor to a consultative process that will restore a functioning government to the people of Kirinyaga County,” the committee urged.

The Malala team urged Senator Charles Kibiru to lead the various reconciliatory measures to bring together the two sides and all other institutions to restore harmonious working relations in Kirinyaga.

The team said from the evidence adduced before it, there was clear mismanagement of some tenders. Of the 12 tenders listed in the Motion, the committee noted that the assembly only prosecuted four of them.

“Of the four tenders prosecuted, the committee notes there was clear mismanagement of the tender process where tenders were awarded to companies whose bids were not responsive or where there were clear cases of conflict of interest,” the report reads. In the case of violation of the Public Procurement and Disposal Act 2015, the senators noted that the evidence showed that the respective tender committees were by law established by the respective accounting officers.

“There was no evidence linking the governor with the establishment of tender evaluation committees,” the report notes.

Issue of conferring of benefit to a public officer, the committee faulted MCAs for listing 12 imprests paid to Waiguru and alleging that she was issued with the imprests but never travelled or surrendered them.

“The assembly only prosecuted two of the alleged travels. The governor adduced evidence of the travel and where travel was not undertaken, the imprest was surrendered though out of time,” the report says.

The committee observed that the accounting officers should adhere to the Public Finance Management Act, 2012 which require imprests to be surrendered within seven days and in the event of delay, the refund should be made with interest.

“The committee finds that this allegation was proved but does not amount to an impeachable offence,” reads the report. Instead, the committee said the evidence points to administrative malaise in the management of imprests in Kirinyaga County.

On deplorable healthcare situation in Kirinyaga, the committee established that there were significant systemic problems in the sector that cannot be addressed by various organs including the assembly and national government institutions.

Previous article
Uhuru, Ruto allies clash over verdict that Waiguru remains as clean as a whistle
Next article
Pregnancy made me hate my husband's voice, cooking