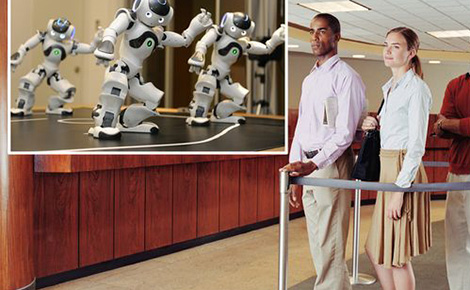 Bank employees in Japan might want to start thinking about a new career path.

That's because the country's biggest bank has just announced it's planning to start installing robot employees to help deal with customers.

That's right, the country that gave us the creepy cyborg geisha, will now hand the financial frontline over to a non-human.

Mitsubishi UFJ Financial Group will introduce Nao, a 58cm-tall robot, at a couple of its branches in April. If Nao successfully completes his trial period, the company says it will consider bringing more robots into other branches in the future.

The robot is programmed to speak 19 languages and has twin cameras on its head that can detect emotions from customer's facial expressions.

It has four directional microphones that act as its ears and also help to detect emotion from tone of voice.

Although built by a French company in 2006, it's Japan that's pushing for a robotic future to help deal with the country's shrinking workforce.

In fact, Mitsubushi UFJ reckons that by the time the world descends on Tokyo in 2020 for the Olympic Games, the robots will be advanced enough to deal with every type of customer.

It's already off to a good start. Nao welcomed customers to the bank during a presentation in Tokyo and asked them which service they required all without breaking stride.

The company behind the robot, Aldebaran Robotics, has produced over 5,000 models of the Nao robot which is primarily used for education and research.

Nestle Japan has announced it will employ another Aldebaran robot, called Pepper, to sell coffee machines at 1,000 outlets around Japan by the end of the year.

We have to wonder what would Elon Musk say about all this?

Secrets to a better job and more money

Learn a completely new skill. Take risks. Challenge yourself. Go outside your comfort zone. Learn web design, for example. Study a language. Become a public speaker. You’ll be fresher and more interesting to employers as you expand your skills and range of knowledge.