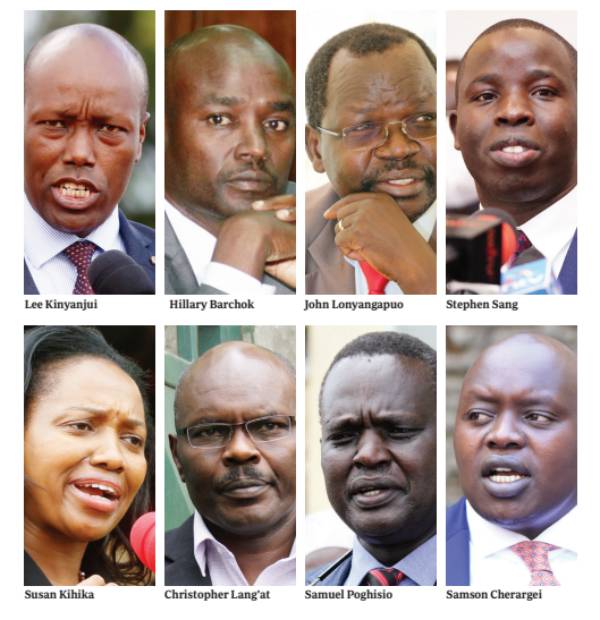 Some governors serving their first term will have a difficult time in their bid to secure re-election in the face of a decision by senators to challenge them in next year’s elections.

A number of senators, some of whom are also serving their first term, have expressed interest in becoming governors in their counties.

In Nakuru County, Senator Susan Kihika is determined to dethrone Governor Lee Kinyanjui, who has announced he will be seeking a second term.

Governor Kinyanjui, whose development record has endeared him to the electorate, has in the recent past become aggressive as the race shapes up.

“It is not about how much people talk but what they have done for the electorate,” said Kinyanjui, adding: “The real party will begin in January.”

Senator Kihika, who declared her interest two months ago, has intensified her campaigns capitalising on the wave of Deputy President William Ruto and UDA.

The contest will be more interesting in Bomet County where Governor Hillary Barchok and Senator Christopher Lang’at are set to face each other in the campaigns despite the two being in UDA party.

Earlier this year, Senator Lang’at expressed interest in the governorship but changed his mind. Lately, he has instead thrown his weight behind former governor Isaac Ruto.

“I have officially joined Isaac Ruto to send home Barchok. We are focused and very soon we shall make Bomet great again,” Lang’at said in a Facebook post.

Barchok is, however, not leaving anything to chance and has recently intensified his campaigns engaging different groups of elders and opinion leaders seeking their support.

Both leaders were elected on Kanu tickets in 2017 but their divergent views came to the fore last year following the expulsion of four nominated ward representatives over alleged gross misconduct.

The move did not augur well with Lonyangapuo. To add salt to the injury, the MCAs in September, ousted speaker Catherine Mukenyang, an ally of the governor.

While Poghisio remains a steadfast member of the independence party, Lonyangapuo who is seeking reelection has decided to chart his own path by launching Kenya United Party (KUP) on November 12.

“You think I have not matured (politically)? We shall conduct nominations that will be fair and just that whoever will win shall get the tickets without attracting any contestation,” said Lonyangapuo.

The youthful Nandi duo of Governor Stephen Sang and Senator Samson Cherargei are similarly set to face off.

The two had in 2017 promised to work closely in order to move the county forward but fell out after two years.

Since then, Cherargei has been fiercely critical of Sang’s performance. The governor is keen on retaining the seat.

By Mate Tongola 20 hours ago
Politics
Jalang'o: I'm not a political traitor