What will the presidency of Joe Biden bring to Kenya? 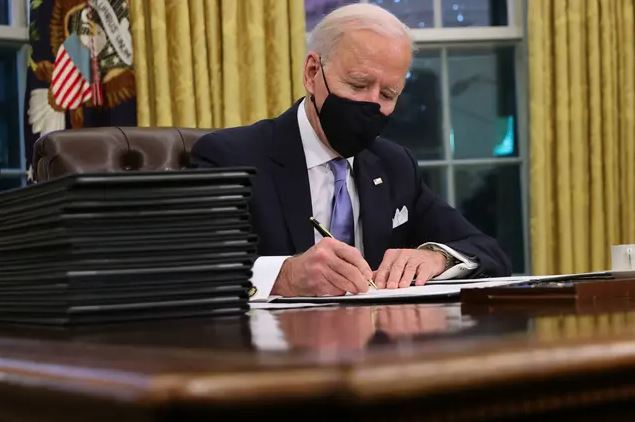 Joe Biden (pictured above) became the 46th president of the United States on Wednesday amid tight security.

Chief Justice John Roberts administered the oath to Biden who chose to use the 127-year-old family Bible.

Biden, 78, is the oldest president elected to the US presidency in the country’s nearly 250 year history. Kamala Harris, a woman of African-Indian origin, who was elected the country's first black vice president also took the oath administered by Supreme Court Justice Sonia Sotomayor.

Just like every storm leaves significant structural damage in its path, the U.S. and its relationship with other nations may never fully be restored after Hurricane Trump.

It will take months and years to sort out the consequences of Trump’s tumultuous presidency.

But everybody knows that changes in governments do not bring significant changes to the US system.

What will the presidency of Joe Biden bring to Africa?

An analyst at the South African Institute of Security said it may do nothing, or it may be somewhat "respectful."

As the White House changes guard, uncertainty has clouded Kenya’s recent quest to reach a free trade agreement (FTA) with the United States.

Even before Joe Biden took office, he had given strong signals that he planned to abolish many of President Donald Trump's policies, involving trade, environment, and geopolitics. Factor, which makes Kenya a marginal position in the ongoing bilateral FTA negotiations.

The unexpected resignation of the US ambassador to Kenya, Kyle McCarter, added to Nairobi's anxiety.

He supported President Trump's belief in deepening trade and business with Africa.

"The Trump administration values ??bilateral policy guidelines, but the Biden administration has promised to return to multilateralism and establish alliances. Although Kenya may wish to continue pursuing free trade agreements, there is no guarantee that Washington will be interested in it."

But if we stick with his words 2010 during his visit to Kenya while he was US Vice President, he said that the successful passage of the new constitution and other important political reforms would increase US investment in this East African country.

Biden said in a speech in Nairobi that American companies were eager to do business in Kenya.

He said that if political and economic reforms were carried out as promised, there would be more opportunities. So, if he’s going to keep his words as spoken 10 years ago, there might be big hope for Kenyans.

Meanwhile, China wants to end the trade war that Trump started and is eager to see the new administration lift sanctions imposed on Chinese tech company Huawei in addition to cuts on Chinese goods.

China is also keen to work with the United States on climate change and the COVID-19 pandemic. Besides, China hopes that the administration of Joe Biden will play a more effective role in global affairs including security and environmental conservation.

Some Gulf states fear that Biden could move in the direction of the 2015 Iran nuclear deal.

They hope to talk to other countries before taking any step in this direction and bringing them into confidence.

The Biden administration also expects these countries to play a positive role in Yemen and Syria's human rights and refugee issues. Mexico hopes that Biden will change the immigration policy for Mexicans and give them relief.

Under current policies, thousands of people seeking asylum in the United States have to live in dangerous areas of Mexico close to the U.S. border until their applications are processed.

At the same time, the people's eyes here are on how Biden deals with Brazilian President Jair Bolsonaro, who is considered a staunch supporter of Trump.

However, analysts believe that it will not be easy for Joe Biden to live up to everyone's expectations.

Surjit Singh Flora is a veteran journalist and freelance writer.

The economics of Ruaka…