Residents of Nairobi City County are set to benefit from phase one of the Northern collector tunnel in Murang’a County that is set to officially launch in December this year.

Phase one of the tunnel consists of Kigoro water treatment plant, raw and treated water transmission pipelines. Athi Water Works Development Agency tasked with the implementation of the project, is also modifying water distribution networks for Nairobi through laying of water transmission to improve distribution for underserved areas.

While inspecting the progress of the project on Friday, Cabinet Secretary for Water, Sanitation and Irrigation Sicily Kariuki said that despite the effects of Covid-19, she is glad that the multi-billion project is right on course and will meet the December 2020 deadline.

“As we revise the operational protocols here to respect the instructions issued by the Ministry of Health, I have been assured by the contractors here that there will be no delay in the anticipated end date to complete this project,” said the CS.

Athi Water Works had earlier said the main focus of the tunnel is to provide a reprieve to Nairobi residents whose daily water demands are currently higher than the supply by almost 40 per cent. CS Kariuki echoed the Authority’s mission, admitting that the tunnel will immensely boost existing water supply to Nairobi and residents of Murang’a.

“This is an important project as it will not only help residents of Nairobi but also the local community here in Murang’a County hence there should be no delays when we can avoid one,” added the CS. 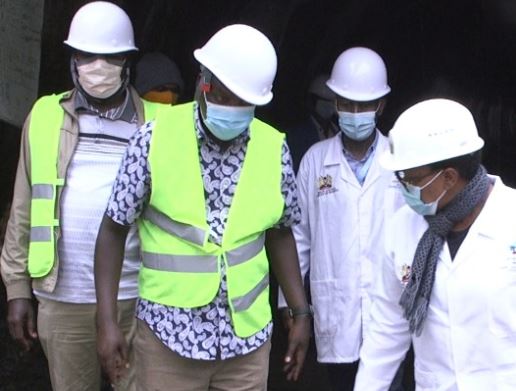 The agency is also planning on various intervention measures to improve water and sanitation for Nairobi, Muranga, and Kiambu Counties targeting about 900,000 people directly.

Similarly, the National Irrigation Authority is set to launch the Mirichu Murika irrigation project in three months. The project, which is currently under progress in Kiharu constituency, targets to benefit about 2000 local farmers once complete.

“The government has invested about Sh400 million in this project and once it is complete this year, it is anticipated that it will empower the farmers to improve their farm productivity,” said CS Kariuki.

It was not immediately available for comment outside regular market hours on the Washington review report.