No extension of retirement age from next year, says PSC

NAIROBI, KENYA: The government will not extend the services of workers who have attained the mandatory retirement age of 60 years with effect from January next year.

Persons with a disability will retire at the age of 65 years and the retirement age for academic staff of public universities and research scientists shall be guided by the relevant legislation and guidelines.

“We have decided that, with effect from January 1, the commission shall not approve any extension of service for officers retiring from service upon attainment of the mandatory retirement age of 60 years, and 65 years for persons with disability. The retirement age for academic staff of public universities and research scientists shall be guided by the relevant legislation and guidelines.” 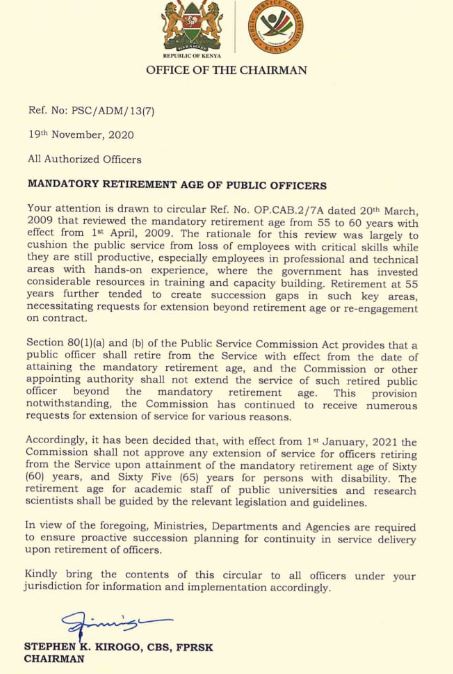 MPs direct Treasury to fire of civil servants above 60 years

He called on ministries, departments, and agencies to ensure proactive succession planning for continuity in service delivery upon the retirement of officers.

The government in 2009 revised the retirement age to 60 years up from 55 in a move meant to ensure skilled people remain in service longer.

"At this age, most officers have gained valuable skills and technical competence through hands-on experience as well as advanced training in various fields," said the then Minister for Public Service Dalmas Otieno.

The minister said pushing up the retirement age would in the short-term reduce the increase of the number of new pensioners.

Otieno said the move will boost contribution to the pension scheme and development of the national economy.

He also noted that the Government would be saving 15 per cent of payroll each month and public employees will be adding 7.5 per cent, which will be a good contribution to gross national Savings for investment.