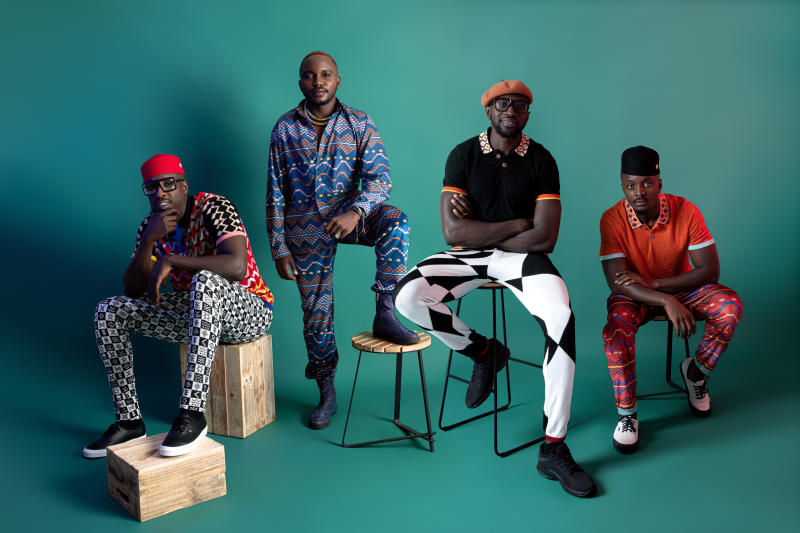 If you have not heard about Sauti Sol (pictured), arguably Africa’s leading band, then you must be completely off the grid. Among their many accolades is the deal they signed with Universal Music Africa earlier this year. They have been nominated for the BET awards and won others in the MTV Africa and MTV Europe Awards.

Adept at handling the limelight and media coverage, it is always a pleasure to be in their presence. But what made this particular encounter memorable for Team Hustle was talking about the new ventures they are embarking on.

The specific venture of interest for Team Hustle on this day was the latest reality and documentary show, Sol Family, produced in partnership with Eugene Mbugua, founder of the production company, Documentary and Reality TV (DnR).

Working with Sauti Sol is William Nanjero, the General Manager of Sauti Sol’s record company, Sol Generation Records. Nanjero, 36, a trailblazer himself, was the first athlete to represent Kenya in the long-distance Triathlon World Championships (2019) and Africa World Cup (2019).

It is not surprising that these giants, have come together to build a rather impressive ship. They say it is all about networking, consistency and telling powerful stories.

In a candid conversation with Hustle, Eugene Mbugua, William Nanjero and Savara Mudige, speaking on behalf of his Sauti Sol band mates, discuss their glory, setbacks, staying power and challenges, particularly in relation to an exceedingly difficult financial year for most businesses.

Eugene, you are known for some of the best reality shows in Kenya, like Young Rich and Get In The Kitchen. What inspired Sol Family?

Eugene: Luck. No, I’m kidding. There was luck in meeting William Nanjero, and luck because Savara and I went to the same high school. But we transformed that luck into something concrete when we came up with Sol Family.

It happened fairly quickly once we decided to do it. In February, the concept was drawn up on a chat in my living room. In August we premiered the show.

What I like about Sol Family is that it is different from a lot of the reality shows I’m used to. It isn’t centered around conflict, or glitz and glamour. It is centred on good vibes. You’ll see substance, mentorship, human stories, and fatherhood.

Savara: We wanted to communicate a powerful message to our fans, let them see who we are, when we are not on stage. As a band, we believe in living a wholesome life; what we eat, drink, how we work out, our philosophies and what we stand for.

In 2018 and 2019, it was clear to us that we needed to constantly be evolving. Sol Family is a part of that evolution. Our record company, Sol Generation, is another.

Nanjero: One of the things I admire the most about Sauti Sol is that when they decided to form Sol Generation Records, they had the humility to know they could not do it alone. They got a strong corporate vehicle behind them by partnering with solid business minds.

What would you say the importance of networks and partnerships is in business?

Savara: Networks are extremely important. But it isn’t just about networking, it’s about intentional interactions. I’ve learned this from Eugene and Nanjero. These men don’t just meet with anyone or spend time anywhere without a purpose. Every single interaction is deliberate. It’s a skill. DnR is 11-years-old.

DnR is 11 years old, Sauti Sol is 15-years-old. Tell us about staying power and if networks have anything to do with that process.

Eugene: It comes down to consistency. In the past 11 years my company has had approximately 1.8 shows a year. I say 1.8 because sometimes we’ve had three shows, sometimes two. But we have ensured we are on air.

It is about the power of compounding growth and workmanship. When you become better, you get better deals. I mean, when I started out, I never would have approached Sauti Sol with a project; I just wasn’t there yet. Now, I am. I wouldn’t have gotten here without consistency.

You mentioned luck earlier; is there an element of luck in longevity?

Eugene: Yes, but when luck comes, it should find you on the grind. It should find you ready and doing your thing. Savara, for instance, did a programme with the Stanford Seed, part of the Stanford Graduate School of Business. When Sol Generation came about, he had the knowledge needed to become the Commercial Director.

How did Covid-19 affect you?

Savara: I think the biggest thing for us as a band was realising that we needed to change how we reached our fans. We were used to having the fans come to us. After the (Covid-19) pandemic began, we needed to redirect and take the show to them. I don’t know if it’s luck that we had been preparing to do this anyway, but we had to expedite everything, the whole world had to in order to survive.

Eugene: I applaud all the businesses that have made it out there. When the first case of Covid-19 was reported in Kenya, my company took an instant hit. We had been prepping to shoot Sol Family, but we had to put breaks on that and everything else, including my other shows like Our Perfect Wedding and Foods of Kenya.

We literally went to zero, sent everyone home. For two – three weeks, nothing was happening.

Eugene: Yes, we didn’t know if we’d be alive after this thing. Imagine, you want to tell your employees we will be okay, but you can’t, because you don’t know.

Savara: The uncertainty was hard; 2020 was meant to be one of our biggest years. We had tours planned in 25 cities in the United States and 15 shows in Europe. All that was cancelled.

How do you come back from the hits?

Nanjero: You must learn quickly. Reinvent. We saw what the inability to work was doing to our artists; when artists don’t create, they become jittery. Unlike many corporate jobs, they couldn’t work from home or Zoom it in.

So we created a safe space for them at our artist centre on Jacaranda Avenue. We did tests on everyone who wanted to come to the centre, then gave them isolated spaces to work from.

Eugene: We also partnered with the Ministry of Health, to better understand how to navigate these new waters. DnR provided free production services to the ministry. Sauti Sol used their celebrity status to help spread the campaigns.

Leadership is about understanding the risk, being at the head of the solution and protecting your people.

It’s also about making tough choices. We restructured, became leaner in our operations. Even so, the money we lost during this period, we won’t make back on that level, that’s a fact. But, we are bouncing back.

What do you think ‘bouncing back’ depends on?

Eugene: How strong a house you have built, how much you have in savings, how quickly you turn things around after that.

Good example? In the midst of this crisis, my company put together one of the biggest TV events in Kenyan history, Concert Nyumbani, a concert that aired live on 11 channels in Kenya, simultaneously.

This season has been scary, confusing, still is on some levels, but we move beyond the fear.

Savaro: Exactly. Covid-19 has taught me that life can go any direction.

Yes, we lost avenues of income because events were shut down. But now I appreciate the fact that we can do a concert in Nairobi and have it watched in Brazil, in real time.

It’s about adaptation. The cab drivers who adapted quickly to Uber for instance, survived and thrived. Many of those who didn’t, struggled, some are still struggling.

Nanjero: You can wallow in tears or move forward. It’s that simple. Many people have great gifts. The question is, how can you continually inspire others using your gift? We don’t take ours for granted, we want to showcase it to the world, to create positive change.