Some airlifted to centres as thousands sit KCPE exam

The learners are to be returned to Boni after the Kenya Primary School Education Assessment (KPSEA) and Kenya Certificate of Primary Education (KCPE) exams.

Lamu County Commissioner Macharia Irungu said the 28 candidates were airlifted because their respective schools were not registered as examination centres. He said the move shows the national government’s commitment to the 100 per cent transition policy, regardless of where the students are based.

Five of the Boni schools had been closed four years ago due to insecurity fears stemming from frequent al Shabaab attacks on schools such as Mangai Primary. It was closed after part of its roof was set ablaze.

Other affected schools are Basuba, Milimani, Mararani, and Kiangwe which had remained closed since 2014 following attacks by suspected al Shabaab militants.

However, the schools reopened following national government’s intervention under Operation Amani Boni. Macharia said the candidates will have full-time security until the exams are over.

Labour PS nominee Geoffrey Kaituko advised the candidates to face the exams courageously. He urged them to align their education with the skills required by the local and international job market.

He said as a priority, he will map out the needs of every country and align our supply to each of them.

Elsewhere, some KCPE and KPSEA candidates were forced to sit exams in the hospital.

Cases of some schools failing to pick papers from exam centres were also reported in some areas.

In Uasin Gishu county, 52 centres failed to pick papers while the same was reported in Bungoma’s 15 schools.

He told journalists at Bungoma DEB Primary yesterday that the affected schools were mostly private schools that were closed by the Education ministry for not complying with the set requirements.

Bungoma county director of education Philip Chirchir said he will establish what transpired in the 15 schools. “Their exams are still being kept in our stores as we try to establish what could have happened. Nobody will tamper with the exams,” he said.

In Uasin Gishu, Basic Education and Early Learning PS Dr Julius Jwan said most of the schools that failed to pick up their papers are private “and closed shop during the Covid-19 menace”.

“They failed to pick the grade six exams because the registration for KPSEA exams took place when the pupils were in grade three when the formative assessments were done progressively. Most of these schools closed and learners transferred to other schools,” said the PS.

He warned private schools against registering underperforming pupils in public schools, saying the Kenya National Examination Council will look into the claims and take legal action.

“It is an irregularity, and we will ensure the learners sit their exams peacefully and then carry out an investigation to understand the circumstances under which such practices happened.”.

“The government is ready to have them move to the next level by next year,” he said. Western regional education director Steven Barongo said 200,120 candidates in the Western region, including 100,060 KCPE and 100,060 KPSEA candidates, are sitting the exams.

In Nakuru, Lands CS Zachariah Njeru and his Labour counterpart Florence Bore moved to ease anxiety among teachers and parents over the fate of grade six candidates, saying the Kenya Kwanza government will ensure a smooth transition through the Competence Based Curriculum (CBC).

They spoke separately in Nakuru and Kericho counties where they supervised the distribution of KPSEA and KCPE examination papers. 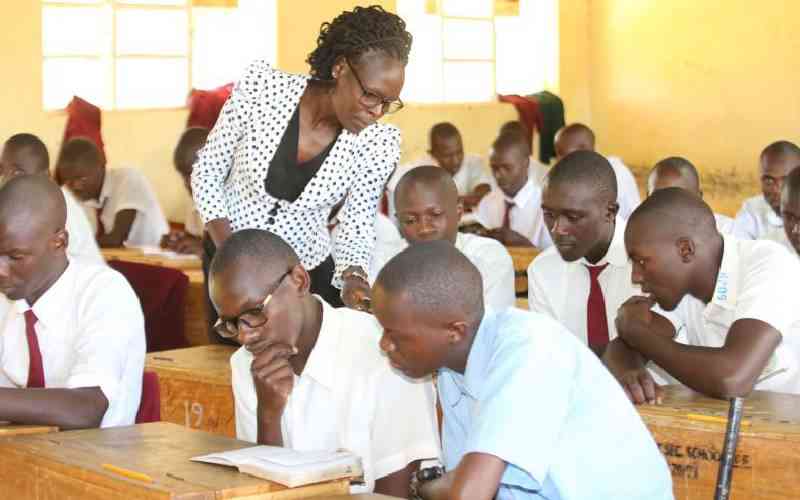