Digital influencers were paid to prop up propaganda and misinformation in online public debates online, following the release of the Pandora Papers last month.

A new report by researchers from the Mozilla Foundation states that social media influencers, particularly those on Twitter, were hired to spread propaganda and derail online debate on the issue.

“Social media — and especially Twitter — in Kenya is often leveraged to deceive and manipulate around political issues, rather than foster open discussion,” states the report by Mozilla Fellows Odanga Madung and Brian Obilo.

“This phenomenon is fueled by the country’s flourishing disinformation industry — a shadowy and sophisticated network of fake accounts, artificial hashtags, and well-paid disinformation influencers,” state the report.

According to the researchers, the influencers promoted hashtags supporting the Head of State and his possession of offshore assets, with some tweets spreading falsehoods and giving an impression of wide public support.

“With the State and the president under pressure, due to soaring online outrage, a counter-narrative operation was mounted and found a strong ally in Twitter,” states the researchers in their report.

According to the researchers, Twitter’s trending algorithm amplified these campaigns to users seeking information about the leaks and engaging in discussions about them on the platform. 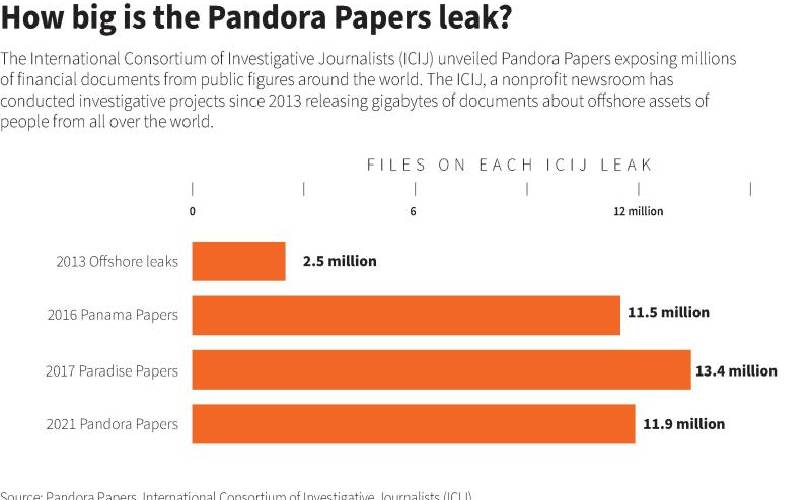 “As a result, a distorted perspective began to gain momentum — one where Kenyans appeared outraged not by the Pandora Paper’s damning findings, but by their implication that Uhuru Kenyatta is guilty of wrongdoing,” explains the report.

The report analysed 8,331 tweets produced during the campaign including 3,870 tweets from 833 authors sent under the hashtag #offshoreaccountfacts.

Some of the accounts that participated in the disinformation campaign over the Pandora Papers were also found to have been used to drive pro-BBI messaging campaigns in May this year, a time public debate on the Bill was particularly heated.

Influencers who were interviewed in the report said the practice has been going on for years and that politicians pay as much as Sh2,500 to have a particular hashtag trend.

A hashtag could take anything between 500 and 2,000 tweets to trend and the report states that influencers often scale up disinformation campaigns by creating fake accounts, mimicking those belonging to celebrities to gain followers or by buying accounts that already have a big following and using these to amplify their messaging.

Influencers were also said to offer their services across the political divide and to any parties willing to pay to amplify their agenda on social media.

The report comes at a time when the country is gearing up for general elections scheduled in less than a year.

A report released in 2018 revealed that operatives from Cambridge Analytica, the now-defunct political campaign firm, were actively involved in disinformation campaigns in Kenya’s 2017 General Elections.

The company had used the same tactics used during the 2016 presidential elections in the US that are said to have helped propel Donald Trump into office.

The firm was also implicated in disinformation campaigns during the Brexit campaigns in the UK that saw Britain leave the European Union.

What to do when your phone is stolen

With advanced technology, the pain has been eased and a victim can remotely clear his or her phone to prevent the intrusion of privacy.

KRA has surpassed its tax collection target in the four months to October by Sh27.09 billion, on the back of recovering economy.

By Sara Okuoro | 51 minutes ago