Members of the National Assembly yesterday voted for the reversal of Covid-19 tax reliefs in an attempt to fill empty government coffers.

But given the dire economic situation, it is not only the government that is desperate to recover from the havoc wrought onto an already strained economy when Covid-19 struck in March.

Business and households have been hit hard by the pandemic, dimming any hope for a meaningful revenue to be realised in the latest reversal.

The country is caught up in the grip of a health crisis with doctors, nurses and clinicians downing their tools over a myriad grievances, including the push for better pay and provision of personal protective equipment (PPE).

A number of businesses have shut down, more than 1.7 million workers lost their jobs in the first half of the year, while many others are on pay-cuts. This situation will be complicated by the new tax measures that come at a time when Kenyans are faced with new burdens to make ends meet.

Beginning next year, most families will be sending their children back to school with a number of learning institutions slapping parents with additional fees to cover for lost income, clear arrears and cater for additional costs like buying sanitisers and face masks.

The government, however, sought to re-assure Kenyans that the new tax rates will be lower compared to the ones they paid in pre-Covid-19 period.

During the Covid-19 period, an individual taxpayer earning Sh50,000 has been paying a monthly pay-as-you earn (Paye) of Sh2,687. But under the new tax regime, they will be paying Sh4,367 compared to the pre-Covid period of Sh7,656.

For those earning a basic salary of Sh100,000, they are currently paying Sh14,366 under the tax incentives. Beginning January, the taxman will take Sh17,800 from them compared to pre-Covid period when they used to pay Sh22,656. 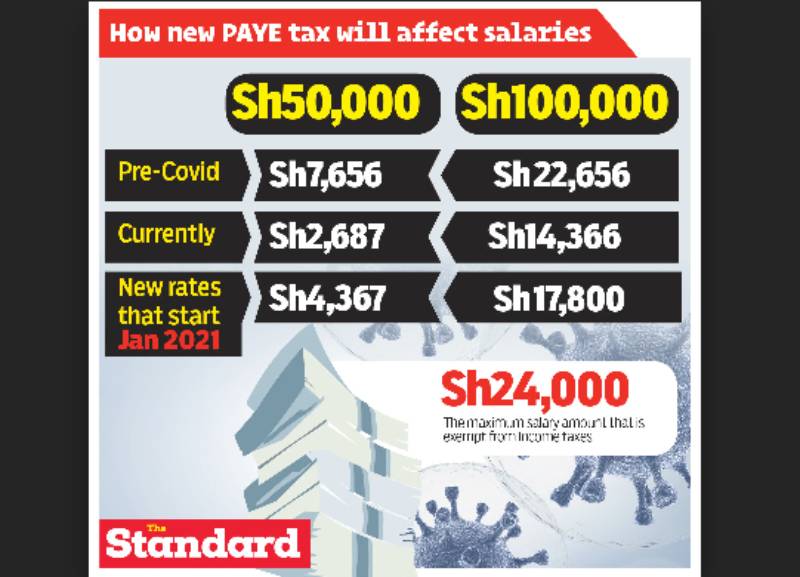 To cushion Kenyans against the adverse economic effects of the pandemic, President Uhuru Kenyatta’s government introduced some tax reliefs which saw income tax paid slashed from 30 per cent to 25 per cent for those earning over Sh24,000 and above. Those earning Sh24,000 and below benefited from 100 per cent tax waiver.

But yesterday, MPs reversed all these tax gains by passing into law the Tax Law Amendment Bill, 2020, bringing to an end a nine-month tax holiday that helped many Kenyans endure the crippling effects of the pandemic that has hit all sectors of the economy.

National Assembly Majority Leader Amos Kimunya described the unanimous passage of the Bill as a win for both the government and the people.

“What we have passed today is a win-win for the Treasury and people of Kenya,” said the Kipipiri MP.

During the debate, Kimunya and his minority counterpart John Mbadi rallied the House to back the higher taxes so as to save the struggling economy.

Kimunya cited the need for the government to continue financing projects and services, including the Big Four Agenda.

“I would wish to ask for support on this particular matter so that our government can continue operating,” said Kimunya.

Mbadi said the disadvantage of losing revenue outweighs the benefits of individuals increasing their liquidity.

The Kenya Revenue Authority (KRA) missed its tax collection target by Sh186.3 billion since March when the country reported its first case of coronavirus.

Commissioner General for KRA Githii Mburu said the taxman collected Sh1.09 trillion against a target of Sh1.28 trillion in the eight months to November.

However, during this period, a lot of Kenyans also lost their source of income, with data from the Kenya National Bureau of Statistics showing that over 1.7 million people lost their jobs in the first half of the year.

The economy contracted by 5.7 per cent as sectors such as tourism and hospitality bore the brunt of the containment measures implemented by the government to curb the spread of Coronavirus.

A World Bank report showed that revenues and profits strongly decreased for micro-enterprises run by young entrepreneurs, with only few of them getting support from the government and NGOs.

Most of them, the report found, were forced to temporarily close between February and July, with average sales decreasing from Sh63,406 in February to Sh38,167 in May-June and profits reducing by almost 50 per cent.

“Almost one in three household-run businesses are not currently operating,” according to the World Bank report.

Corporate income tax, which is paid by large businesses, was also reduced to 25 per cent from 30 per cent, while small businesses paid to the taxman only one per cent of their sales, down from three per cent.

The latest tax proposals will not go down with most workers, including health workers, who have been pushing for better terms to cope with these difficult times.

A lot of families are also looking at a tough new year with most of them needing extra cash to take their children back to school, some with arrears to pay.

Other Covid-19 goodies that have since been reversed include loan repayment holidays that allowed Kenyans to push forward their financial burden on settling their loans.

Unemployment rate increased from 5 per cent in the last quarter of 2019 to 21 per cent at the beginning of June 2020.

The Suba South MP said that the most vulnerable have not benefited from the tax cuts in backing the push to revert to the pre-Covid-19 taxes.

“The government has made some progress, there are poor Kenyans who have been helped to go through this pandemic. The amount that is going to be collected out of this change of tax rate should be used to continue with support for the vulnerable,” said Mbadi.

“Our VAT rate is the lowest in the region. The problem in this country is not over taxation but misappropriation of revenues raised,” he added.

Garissa Township MP Aden Duale described the economy as that which was in the ICU and needed resuscitation.

“The reason for the tax cuts was to create a way for survival for the many who lost their jobs jobs, others handed 50 per cent pay cuts as well as unpaid leave,” said Duale.

“It is a day when we have to make a very difficult choice. The economy is in ICU. How you bring it to HDU is by passing this Bill,” added the former majority leader.

He said there were claims that the reversal was due to push by international lenders that are putting pressure on the country to meet its debt obligations.

“The government can only deliver on its services by raising revenue. These taxes are essential source of money for the government. Now that we are able to move, able to earn some money here and there, the government needs money to finance various services,” said Haji.