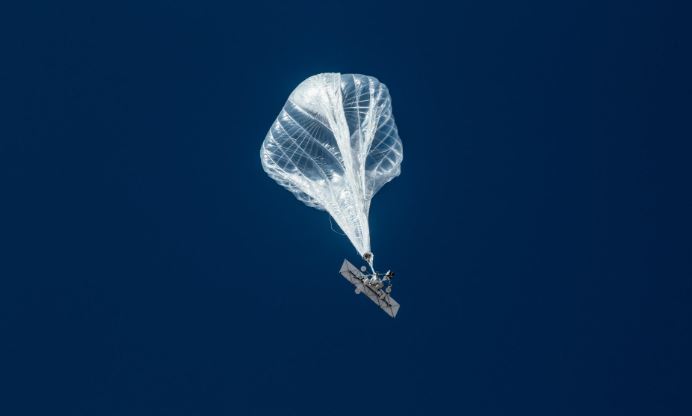 The first two Loon balloons have arrived in Kenya’s airspace, a week after the operators were cleared by the Kenya Civil Aviation Authority. The balloons christened HBA092 and HBAL125 are reportedly already above the centre of Kenya’s airspace and are expected to be joined by two others which are set to arrive in the country through Somalia from Seychelles.

According to StratoCat and Flightradar24, the first internet balloon which was launched in Puerto Rico late January is floating toward Ngomeni Settlement in the Eastern part of the country. It was first spotted in Garissa on Monday. The second one also arrived yesterday according to a tweet by StratoCat.

“While ?#HBAL092 (red) spent last hours wandering south of ?#Nairobi, the second balloon of the fleet arrived to ?#Kenya: ?#HBAL125 (blue). It crossed above Somalia from the Indic and now is moving westbound at 64.000 kft of altitude,” the space monitoring website tweeted.

The balloons are arriving in the Kenyan space just a week following President Uhuru Kenyatta's announcement confirming the approval given to Alphabet Company, Google’s parent firm, and Telkom to fly the balloons in the country’s air space.

The head of state announced that the Kenya Civil Aviation Authority (KCAA) has signed an agreement with Google Loon that allows Loon Balloons to fly over Kenyan airspace carrying 4G base stations with a capacity to provide wider internet coverage.

The latest development is aimed at enabling Kenya to retain her competitive advantage in ICT and innovation amid the Covid-19 crisis while laying the foundation for further expansion once the outbreak is contained.

Loon is a network of stratospheric balloons designed to bring internet connectivity to rural and remote communities worldwide. The high-altitude balloons in the stratosphere (altitude: 18km to 25km) create an aerial wireless network with up to 4G-LTE speeds.

Users connect to the balloon network using a special internet antenna attached to their building. The signal travels from balloon to balloon, then to a ground-based station connected to an Internet Service Provider (ISP).

Uhuru said the deployment of those internet balloons will be vital for the continuity of learning and work disrupted by the outbreak of coronavirus.

According to him, the Google loon and Telkom Kenya partnership will allow learners from all corners of the country to continue learning through accessing soft copy learning materials and assignments.

The arrival of the internet balloons is also good news for companies and employees who are currently working from home. It is expected to help them cut on internet costs.

Last week, a survey by a human resource consulting firm, Corporate Staffing Services, revealed that 65.5 per cent of firms had obeyed the government’s directive to decongest the working environment by allowing employees to work from home.

By Brian Ngugi 1 hour ago
Business
Premium Central Bank says no cause for alarm over banknotes supply
.