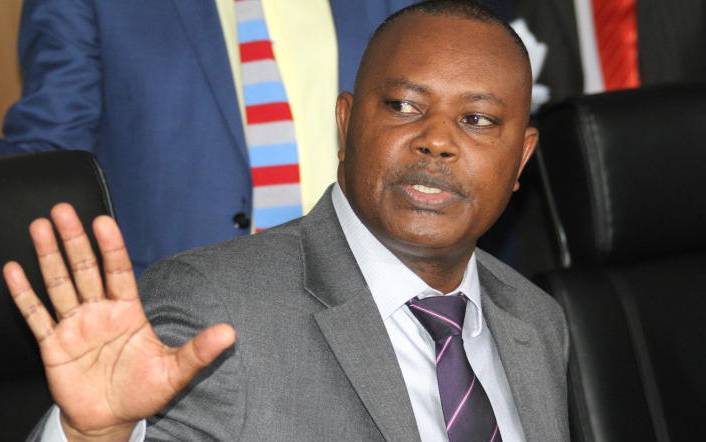 A businessman is seeking to recover the title of a Sh2 billion land he bought from the Kenyatta family.

Samuel Kamau says the Director of Criminal Investigations George Kinoti (pictured) has refused to give it to him even after confirming he genuinely bought it from Mama Ngina Kenyatta in 1986.

“The DCI informed me they were holding my title over claims of fraud but having completed investigations and discovered my title is genuine, there is no reason they should deny me the right to enjoy my property,” said Kamau.

The fraud case was dismissed in 2001 and Dr Kamau says the police have since refused to give him back the title deed.

The 4.7 acres, near Karura Forest in Nairobi, is currently valued at over Sh2 billion. It has been the subject of a dispute since 1997 when Kamau tried to sell the land to Kenya Reinsurance Corporation for Sh550 million.

According to Kamau, he bought the land jointly with Mr Joseph Kibe, through their company known as Sceneries Ltd, at a cost of Sh21 million.

After complying with all requirements, the title was transferred to their company’s name. In 1997, they entered into a sale agreement with Kenya Re. However, before they completed the transactions, Ngengi Muigai, who is President Uhuru Kenyatta’s cousin, claimed the two businessmen forged the title.

Kamau and Kibe were arrested in March 2,000 and their ownership documents confiscated by the DCI.

They were then charged on March 17, 2000 with obtaining money by false pretence after it was alleged they unlawfully obtained Sh550 million from Kenya Re by pretending they owned the land.

Kamau and Kibe faced other charges of making a false document, forgery and obtaining registration of the land’s title through pretence.

Then High Court Judges John Mwera, Kalpana Rawal and JK Mittey, on June 12, 2001, ruled that prosecuting the two based on complaints by Muigai was illegal, an abuse of the court process and harassment aimed at forcing them to surrender the title.

Kamau, in his application, argued that despite the court order terminating the criminal case, the DCI has declined to release his title.

“They insisted that they cannot release the title unless there is a court order directing them to do so. In any case, I cannot be prosecuted twice because the previous attempt to charge me was quashed by the High Court,” he swore.

Lawyer Julius Orenge said continued withholding of the title amounts to deprivation of property. He said the trader cannot develop or transfer the land without the title.

He wants a court declaration that continued holding of the title by the DCI was illegal and order for its release.