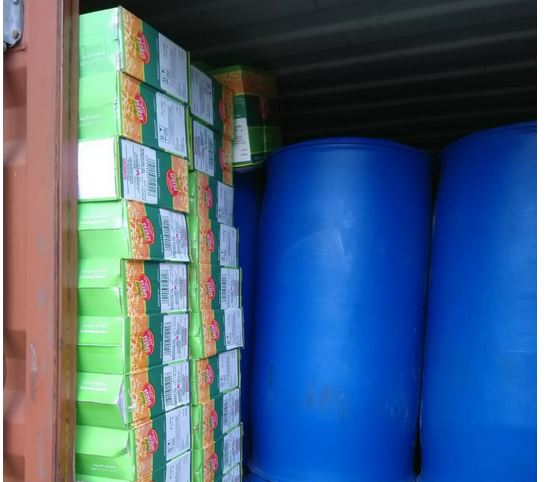 NAIROBI, KENYA: The Kenya Revenue Authority (KRA) Customs and Border Control unit has unearthed a consignment of smuggled Ethanol declared as imported spaghetti at the Inland Container Depot Nairobi.  The consignment, imported from the United Arab Emirates (UAE) with an assessed tax valued at more than Sh15 million had been concealed in four-20 foot containers that had arrived at the Kenya Ports Authority (KPA) operated Inland Container Depot last month.  Speaking, when he confirmed the discovery, KRA Customs and Border Control Commissioner, Kevin Safari, said his officers on routine non-intrusive surveillance duties had successfully managed to identify and isolate the contraband Ethanol shipment. The 57,600 litres of Ethanol had been neatly filled in 288 drums before loading in the four shipping containers.

According to Safari, the team had noted some discrepancy leading to a physical inspection of the containers earlier Wednesday.  “The officers at ICDN near Athi River in conjunction with the team at the Integrated Scanner Management Solution command centre at our Time Towers headquarters positively identified the concealed goods in the containers,” Safari said and added, “The containers imported by Ms. Erikan Holdings Limited had been masked with a total of 10,600 packages of spaghetti.”  Following the discovery, KRA officers in conjunction with the Directorate of Criminal Investigations (DCI) have launched a probe against the importers and the clearing agent.