Raila Odinga has not landed a plum job at the UN

A viral tweet claiming Azimio la Umoja leader Raila Odinga has been appointed to the United Nations is false.

The tweet widely shared on WhatsApp platforms claims that Raila had been appointed as the Political Affairs, Peace and Humanitarian boss across the world.

As the boss, Raila will sit on the UN board, it claims.

This message was first shared by Kakamega Deputy Governor Ayub Savula who said, “Kenya’s history will not be complete without a chapter on Raila Odinga’s significance that is larger than that of any Kenyan who became President. Tell me which other Kenyan whose political industriousness can march Raila Amollo Odinga's political prolific record? None.” 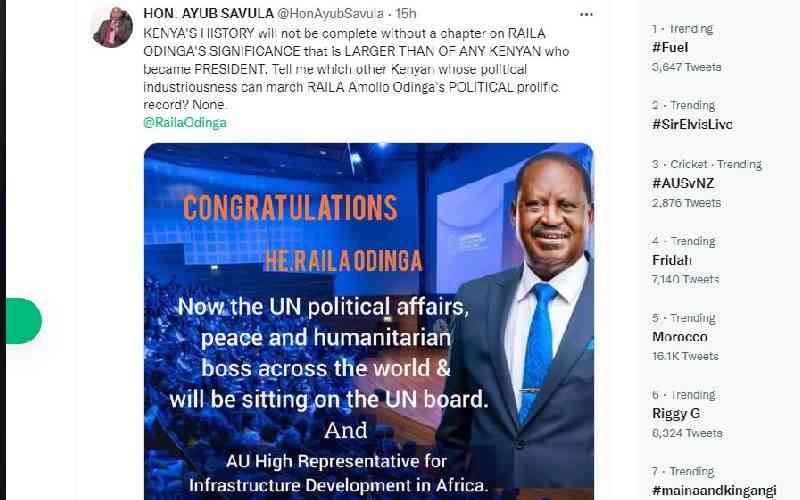 This information was picked by other politicians who re-shared it on their Twitter pages. It had attracted 181 comments and 1,576 likes.

“Congratulations @RailaOdinga, we have Cried until our eyes have no more tears. If this be the hand-car-chief (sic) that gently wipes the tears in our eyeballs so may it be. Strange though that Luos rule the world and are dishonoured at home,” another user posted.

The claim comes after Raila travelled to Zanzibar a few days after the Supreme Court threw out his petition challenging William Ruto presidential election.

The Checkpoint has however established that there is no such appointment at the UN.

The current holder of the office, Rosemary A. DiCarlo of the United States, assumed the post of Under-Secretary-General for Political Affairs on May 1, 2018. She was appointed by Secretary-General António Guterres Mr Jeffrey Feltman.

As Under-Secretary-General and head of the Department of Political and Peacebuilding Affairs (DPPA), Ms DiCarlo advises the Secretary-General on peace and security issues globally, while overseeing "good offices" initiatives and field-based political missions carrying out peacemaking, preventive diplomacy and peace-building activities in Africa, Europe, the Middle East, Central and Southeast Asia and the Americas.

She also oversees the United Nations electoral assistance provided to dozens of its member states each year.

According to the UN website, the Department of Political and Peacebuilding Affairs (DPPA) plays a central role in the United Nations' efforts to prevent deadly conflict and build sustainable peace around the world.

DPPA monitors and assesses global political developments with an eye to detecting potential crises and devising effective responses. The department provides support to the Secretary-General and his envoys in their peace initiatives, as well as to UN political missions around the world.

DPPA is also an agile platform for crisis response, capable, with the assent of countries concerned, of rapidly deploying mediators and other peacemaking expertise worldwide and cooperating closely with regional organizations on the frontlines of conflicts.

The checkpoint reached out to Dennis Onsarigo, Azimio’s press secretary, who said there was no such appointment.

This was echoed by Salim Lone, who was Raila Odinga’s spokesman when he served as the Prime Minister. 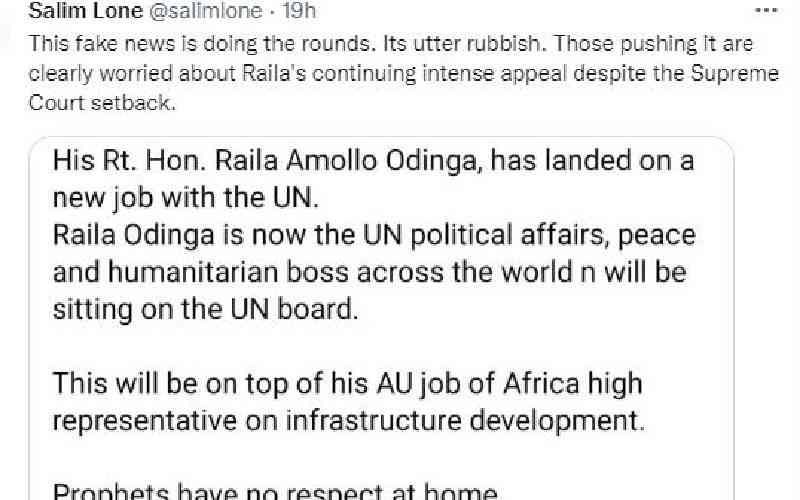 “This fake news is doing the rounds. It’s utter rubbish. Those pushing it are clearly worried about Raila's continuing intense appeal despite the Supreme Court setback,” he said.

The checkpoint rates this claim as FAKE NEWS as Rosemary A. DiCarlo is the current holder of the said office.

The UN has not communicated if there is a vacancy in the said office.