At the onset of the Covid-19 pandemic, Robert Mwalugha and his business partner Kennedy Okiya founded Pick-Up Mtaani, a logistics company to bridge the service and product delivery gap between consumers and retailers.

The duo, who hail from Mombasa, had worked as boda boda delivery people and understood the potential of the logistics business.

To separate themselves from the pack, they sought to create a business model that was affordable and convenient.

Pick-Up Mtaani partners with local shops that serve as agents. Here, customers and sellers can drop off their parcels or pick them up within their neighbourhood.

“You only need a motorbike and a rider,” explains Mwalugha who is a university graduate.

Mwalugha, who borrows inspiration from global tech giants such as Meta, Apple and Amazon, says that with the influx of players in the logistics space, they had to differentiate themselves and keep learning as well.

Mwalugha says that the company started with only four employees and delivered 27 packages on its first day.

“We based our pricing on the bus fare prices during off-peak hours in Nairobi,” he says.

“We figured that to come to the central business district (CBD) and to leave during off-peak hours costs about Sh50, and that’s how we came up with the price point of Sh100.”

When Covid-19 was declared a pandemic and as lockdowns became the new normal, businesses and consumers increasingly “went online.”

The global e-commerce market in 2021 was valued at $14.3 trillion, according to research firm Reportlinker.

“There was less movement and people started to accept that they can receive packages through their local shops,” notes Mwalugha.

In the beginning, Mwalugha tried raising capital of Sh700,000 from family and friends but did not succeed.

“We did not get even a shilling from our families, so we decided to build capital. We decided to take a salary cut, we were going to finance the company from what we got from the delivery business.”

“We decided to take less from the company. Initially, we had a bad way of running a business. We have come to learn why SMEs fail - had not separated ourselves from the business. At the start, as long as we settled costs, we used to share whatever remained among ourselves,” he said.

Mwalugha says they have a structure that allows the company to generate its own capital and scale up the business.

He further notes that separating themselves from the business helps create a pool of capital and avoids going into their personal accounts to settle costs.

“There is the aspect of reinvesting, every month we have needs we want to accomplish, it is not just about paying rent, we also look at growing our base, investing more in marketing and growth of the company,” he says.

Mwalugha says he printed about 200 surveys asking some of his clients what they think about his new model before putting it to work.

“We got positive feedback, they also noted that delivery fee was too high, and we built our business on that because it appealed to many people,” he says.

“In my understanding, out of 10 people, four may not buy a product if the delivery fee is high.”

Pick-Up Mtaani launched a website early this year that is meant to bring automation and help in tracking packages and making payments.

For them, ascertaining the delivery timeline is their biggest headache.

Pick-Up Mtaani and other digital retailers will have to comply with the digital service tax that took effect in January 2021, following its introduction through the Finance Act 2020.

The logistics company remains optimistic about breaking even in the market despite the closure of other start-ups such as notify logistics and Kune Foods which failed to crack the Kenyan market.

“The first problem we are solving is the price factor,” Mwalugha says.

He adds they currently work with 87 agents and have so far served over 10,000 online businesses.

They also offer a rent-a-shelf service where online retailers can rent spaces for their packages.

Mwalugha advises that anyone running a business should maintain a positive attitude and remain consistent.

“For my partner and I, this business has been a learning experience, right now, we have a strategy where we work together and make decisions together.

“Initially, our co-founder dynamics were a bit tricky because we operated separately, this also created a rift between employees,” he says.

The Hustlers experiment
Cartoons
By Gado
12 mins ago
FBI: Polygamous leader Bateman had 20 wives, many of them minors
World
By AP
19 mins ago
Kenyan celebrities you did not know were siblings
Showbiz
By Davis Muli
19 mins ago
Brazil striker Gabriel Jesus has surgery, out of World Cup
Football
By Associated Press
27 mins ago
.

By Gado 12 mins ago
The Hustlers experiment 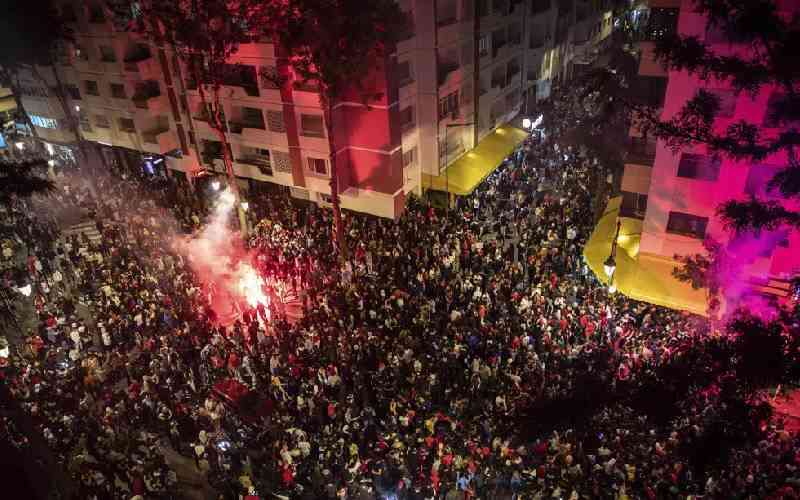 By Associated Press 27 mins ago
Brazil striker Gabriel Jesus has surgery, out of World Cup
.