By Charles Odero | 1mo ago

The winger, born to South Sudanese parents in a Kakuma Refugee camp in northwestern Kenya, signed a four-year deal that will see him ply his trade in Spain's top flight this season.

The move was announced in Mabil's home town of Adelaide. 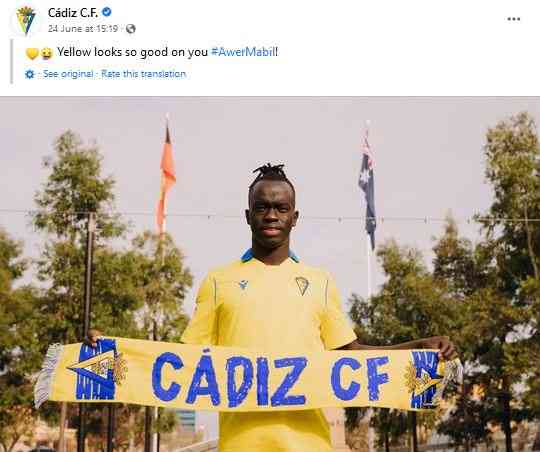 “La Liga is one of the best championships in the world, with some of the best teams like Barcelona, Real Madrid and Atlético de Madrid,” Mabil said.

“I never imagined I could play against them – now it’s a reality.

“Now I have to work hard. I will give my best to win games, (and) against the big teams it will be even more special.”

The 26-year-old spent the back-end of last season on loan in Turkey with Kasimpasa, as the final six months of his contract with Danish side FC Midtjylland expired.

He made over 100 appearances in Denmark, including the 2020-21 UEFA Champions League, where he joined an illustrious list of Australians who have scored in Europe's top club competition.

Early this month after converting a penalty in the shootout triumph over Peru that took the Socceroos to a fifth successive World Cup, Mabil told reporters that it was the only way to thank Australia.

"I knew I was going to score. It was the only way to say thank you to Australia, from me and my family," the 26-year-old told reporters from Qatar,’’ he said.

"My family fled Sudan because of war, I was born in a hut. My hotel room here is bigger than the room we had as a family back in the refugee camp. For Australia to take us in and re-settle us, it gave me and my family a chance of life."

Mabil hoped his contribution to Australia's win would, in the football world at least, help create a new narrative around refugees in Australia.

"Now I think I might have an impact on Australian football," he added.

"We're going to the World Cup. I scored (the penalty), a lot of my teammates scored, we all played a part.

"And yeah, maybe that refugee kid played a big part. So that's on behalf of my family just to say thank you to the whole of Australia."

Mabil said he had arrived in Australia as a child just in time to see the "Golden Generation" of Socceroos play at the 2006 World Cup in Germany.

The current generation of players, he said, were determined not to be burdened by the memory of the days when Tim Cahill and Harry Kewell wore the green and gold shirt.

"We want to create our own chapter," he said. "For me, I see it as a motivation. Now it's time for us to write our own script. Next time we're going to qualify directly. We always do it the hard way as Aussies, it's time to change that picture."