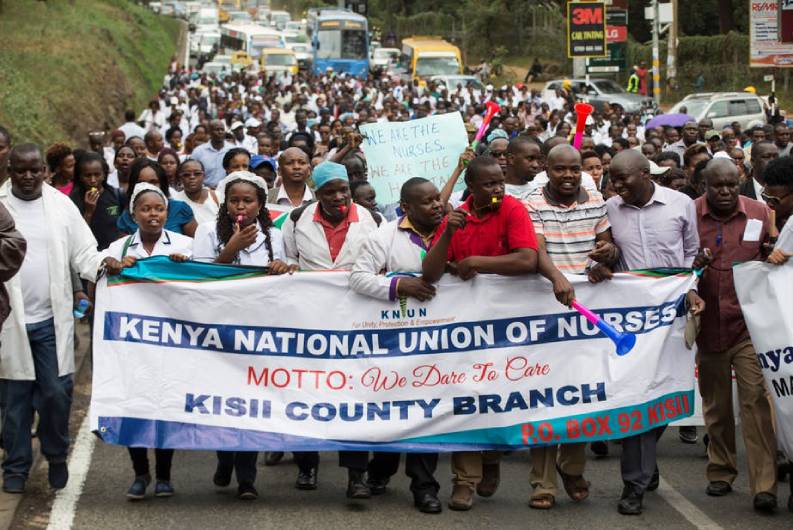 The seven-day ultimatum that had been issued expires today and the union leaders now say they have extended an olive branch to the government to engage them appropriately by Friday.

The move is a sigh of relief to Kenyans as the strike would directly slow the fight against the coronavirus pandemic.

“We gave the government a memorandum on the issues of risk allowance and job promotion. If the government will not give us a positive response by Friday, then we will issue an official strike notice on Monday, May 4, 2020,”said Seth Panyako, the Kenya National Union of Nurses (KNUN) Secretary General.

Panyako however expressed his concerns over what he termed as “misreporting” of their initial threats to the government on the strike.

“We did not say that we would start the strike today. What we did is issue our verbal threats to the government to engage us and if it does not, we would issue a strike notice,” clarified Panyako

Speaking to Standard Digital, Panyako also said the health workers had made a decision to extend their ultimatum to Friday, as a sign of good faith. However, they warned that if the government does not comply with their demands they would resort to industrial action.

The Unions issued a memorandum to the government to address the issues of promotion of health workers and the harmonization of risk allowances to Sh30,000 each. Currently, the allowances stand at Sh3,000 for nurses, Sh3,800 for clinical officers and Sh20,000 for medical doctors.

Representatives of five healthcare associations had on Thursday last week demanded that government addresses the "unlawful" promotion of a single cadre of health workers while side-lining 17 others.

However, as it looks, a conflict is brewing between Doctors and other health workers, as the union leaders continue to accuse the Doctors of taking the whole cake and eating it while they are all working in similar circumstances.

According to George Gibore who is the Kenya Union of Clinical Officers (KUCO) Secretary General, the strike could be inevitable if the current government gestures are to go by. He says, the MoH has been giving a deaf ear to their demands.

“We are gearing towards a strike. This is because the Ministry of Health has not been forthcoming with our demands. We had given them a chance to have an amicable solution to this problem. We have henceforth started the process of lodging a formal complaint with the Ministry of Labor to have the strike, “said George Gibore, KUCO Secretary General.

The health workers under the umbrella of Kenya Health Professionals Society (KHPS) that is chaired by Mohammed Duba, had issued a statement decrying what they termed as poor working conditions.

“Following President Uhuru Kenyatta’s directive to the Ministry of Health to prepare a welfare package for all health workers, we expected to be consulted on some issues. We are open for discussions on this matter since we are the people who understand what our members are going through during this period,” said Duba.

The medics also complained of harassment by police as they carry out their duties. Recently, some medics were teargassed in Thika as they were heading to work.

However, the biggest bone of contention came when medical doctors were paid a higher risk allowance than what the rest of the health workers were earning.

In a letter dated April 8, the Public Service Commission (PSC) approved the promotion of 200 medical health workers under different respective cadres. The list for promotions was forwarded to PSC by Ministry of Health last September 24.However, according to KHPS, the promotions discriminated against other cadres of healthcare workers.

“We have said for a long time that the Ministry of Health is not taking all like people who are contributing to the healthcare services... Yesterday we got information that Ministry of Health, which is run by doctors 99 per cent, had promoted 200 doctors,” said Panyako.

Panyako continued to ask the Public Service commission to come up with a list that accommodated all health workers.

“Even in the response, the PSC recommended that other health workers be included in the promotions list. The question we are asking PSC is, was it so hard to reject the list and direct the person responsible to produce a comprehensive and inclusive one?” Panyako added.

While the other unions have vowed to go on strike, the Kenya Medical Practitioners, Pharmacists and Dentists Union (KMPDU) has decided to take a different stand.

In contrary, KMPDU has asked its members to stick within the Occupational Safety and Health Act 2007, which allows medics to stop offering their services in situations where they feel at risk.

According to KMPDU’s Acting secretary-general Chibanzi Mwachonda, the strike notice would not be appropriate at the moment because it would cripple the process of fighting the Covid-19.

However, KMPDU has continually lamented the inadequacy of the Personal Protective Equipment (PPEs) for the medics.

“KMPDU recommends that the government subject all manufacturers to the same stringent quality measures as specified by Kenya Bureau of Standards (KEBS). Some counties have reported that the PPEs supplied from the Kenya Medical Supplies Authority may be a mixture of quality PPEs and poor quality gear,” Ag secretary general Chibanzi Mwachonda said